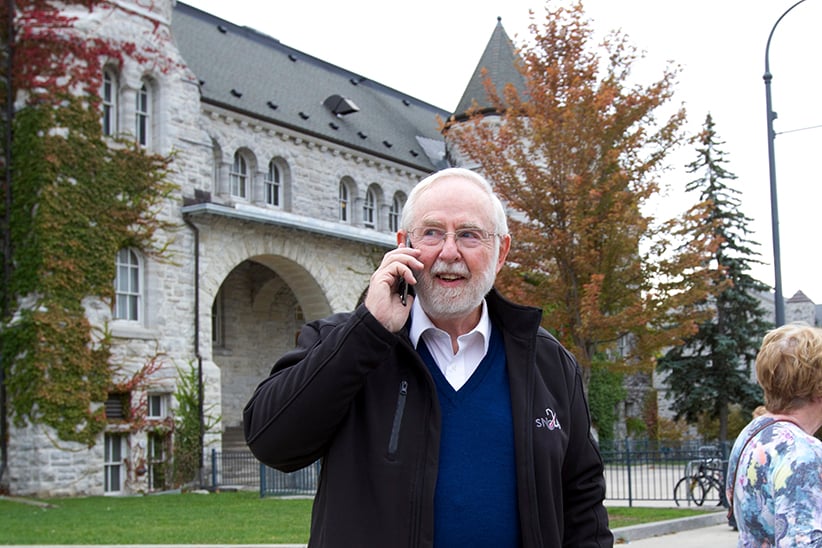 Arthur B. McDonald, professor Emeritus at Queen’s University in Canada, speaks on the phone at Queen’s University, he was a co-winner of the Nobel Prize for Physics at his home in Kingston, Ontario October 6, 2015. Japan’s Takaaki Kajita and Canada’s Arthur B. McDonald won the 2015 Nobel Prize for Physics for their discovery that neutrinos, labeled nature’s most elusive particles, have mass, the award-giving body said on Tuesday. (Lars Hagberg/Reuters)

The thing that won a Canadian a Nobel prize. Arthur McDonald of Queen’s University won a Nobel Prize in physics for experiments­—conducted in an active Sudbury nickel mine—showing that neutrinos change identities while whizzing through space. The groundbreaking discovery, shared with co-winner Takaaki Kajita of Japan, solved a long-standing mystery by proving neutrinos have mass, opened up new fields of study and helped scientists better understand the universe. For the rest of us who struggle with such weighty matters, the Institute for Quantum Computing at the University of Waterloo is helpfully launching an educational, Angry Birds-style smartphone game: Quantum Cats.

Can we stop a doomsday asteroid?

We’re getting ready to find out. Turning to more understandable cosmic work, NASA and the European Space Agency have outlined a mission designed to save us all from Armageddon. In 2022, a pair of spacecraft, DART and AIM, will meet up with an asteroid and its small, egg-shaped satellite. After taking measurements, DART will slam into the stony satellite, while AIM observes how its orbit changes. The experiment will teach us about planetary formation and other stuff, but, most crucially, it will give us our first inkling of how to fend off a planet-killing rock on a collision course with Earth, sans Bruce Willis.

How can America endure yet another mass killing?

They’re still grappling with the answer. After yet another mass shooting—this time killing 10 at a community college in Roseburg, Ore.—U.S. President Barack Obama said Americans have “become numb to this” and that his own response has become “routine.” Unlike other times Obama has spoken in the wake of mass shootings, he offered no new initiatives or planned fixes, but rather pointed a finger at Congress and state governments for not moving on gun-control legislation. His hands may be tied when it comes to changing laws, but Americans still need—indeed deserve—a President who’s willing to keep trying anyway.

Why is Montreal going to dump eight billion litres of sewage into the St. Lawrence?

We’ll see if they will. Mayor Denis Coderre says it’s the only option left to dismantle a snow chute by the Bonaventure Expressway; it would otherwise take years and cost $1 billion to divert the sewer. Quebec’s Environment Minister backed Coderre’s decision. Meanwhile, downstream, a New York state senator has called for an investigation in a bid to put a lid on the plan. 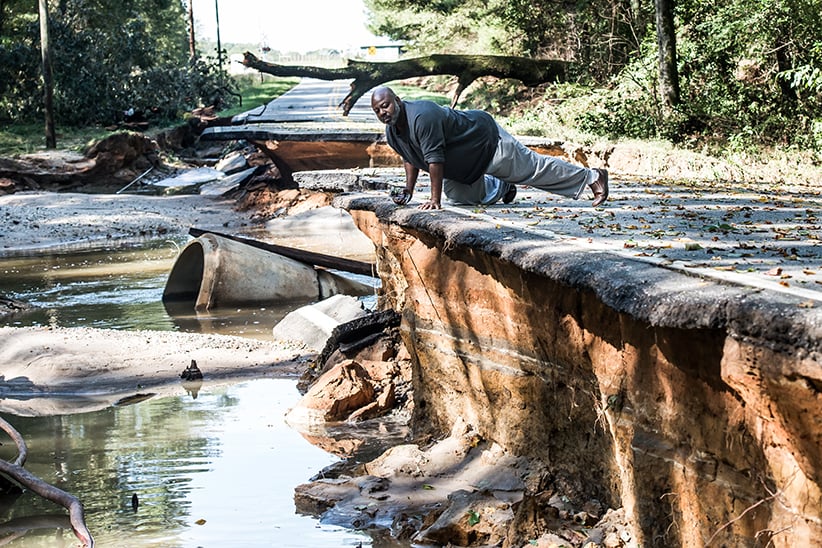 Trey McMillian looks over the damage done by flood waters on a road in Eastover on October 6, 2015 in Eastover, South Carolina. The state of South Carolina experienced record rainfall amounts over the weekend and continues to face resulting flooding. (Sean Rayford/Getty Images)

Are we winning the fight against Islamic State?

Not with these stumbles. The scourge of ISIS in the Middle East can make it easy to overlook the tapestry of woe once again unfurling in Afghanistan. No sooner had Taliban rebels overrun the key city of Kunduz than U.S. forces admitted accidentally bombing a hospital there run by Médecins Sans Frontières, killing 12 medical staff and 10 patients, including three children. Finger-pointing ensued, with American commanders blaming their Afghan allies for calling in the air strike. But there was no avoiding the optics of U.S. bombs killing the very civilians Washington purports to be helping. Another in this struggle’s endless series of self-defeating blunders.

Where did the head of Canada’s Olympians go?

Quit, in the wake of serious allegations. Marcel Aubut resigned as Canadian Olympic Committee president amid accusations of sexual harassment from at least three women. Though the allegations haven’t been proven, his conduct over the years is concerning. Back in 2011, a COC executive penned a letter warning Aubut to stop his improper behaviour, such as touching and kissing. There was also a 2014 profile in L’actualité magazine that quoted a woman saying Canada’s Olympic chief had “zero manners” and is known for his inappropriate remarks about women’s bodies. Representing Canada is an honour. This type of behaviour doesn’t make the cut.

What’s new in the NHL?

Harsh penalties. The NHL season has just begun and already the league has come down hard on one of its dirtiest players. After Raffi Torres illegally checked an opponent in the head during pre-season action this week, the league handed him a 41-game suspension—half of the upcoming season—the third-longest suspension in NHL history. Fans won’t complain that the punishment is too harsh; the league is better off without headaches like him.

Is the CEO of Tesla building a superhero car?

Maybe. Elon Musk, the CEO of electric-car maker Tesla, is milking his reputation as a real-life Tony Stark, the hero in the Iron Man movies. Not only does Tesla’s new Model X come with futuristic gull-wing doors, it also has a “bioweapon defence mode” button that activates a HEPA-filtered cabin air system. Biowarfare experts are dubious about the feature’s effectiveness, but there’s no denying Musk’s cars are cool—as they should be for $185,000 fully loaded. Which makes you wonder: When will other carmakers—Volkswagen, to name one—finally get their act together?