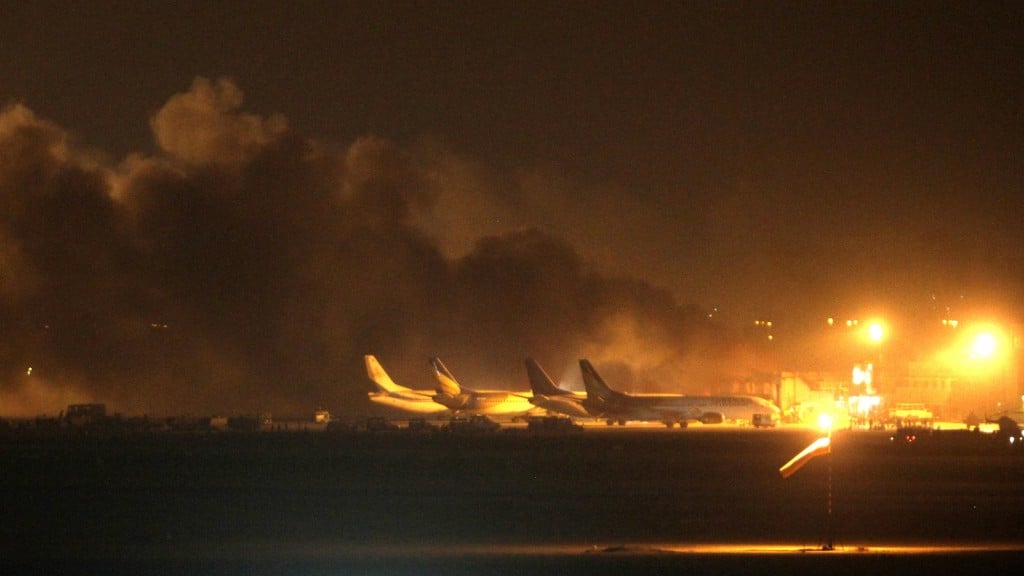 1. Pakistani Taliban attack Karachi’s airport. Twenty-nine people are dead at Jinnah International Airport, the busiest in Pakistan, where attackers launched an assault on a VIP and cargo terminal. How exactly the gunmen accessed the terminal and how many were involved remains unclear. Some reports suggest they wore security uniforms and carried fake ID badges. Ten attackers lay among the dead. A Tehreek-e-Taliban Pakistan spokesman said the raid served as revenge for air strikes on Pakistani villages.

2. Quebec launches a massive manhunt. Police hope to track down and apprehend three suspected murderers and suspected drug traffickers who escaped a prison during a brazen, seconds-long helicopter extraction straight out of the movies—and, incidentally, the second of its kind in the past year. Denis Lefebvre, 53, Serge Pomerleau, 49, and Yves Denis, 35, broke free from the Orsainville Detention Centre on Saturday and remain at large. The green helicopter that plucked them from the prison courtyard headed west, but authorities lost track of its whereabouts.

3. Sao Paulo police launch tear gas. Three days before the World Cup, and the last thing anyone wants is a transit strike. But a transit strike in Sao Paulo, where Arena Corinthians stadium will serve as the venue for the tournament’s opening match between Brazil and Croatia, threatens to snarl efforts to attend the game. The union is furious at the cost of the soccer tourney and wants the government to approve a 12.2 per cent salary increase. The police responded to union protests by launching tear gas into the crowd. Meanwhile, that first game remains scheduled for Thursday.

4. Tony Abbott and Stephen Harper are friends. The Australian prime minister landed in Canadia yesterday. He’ll spend a couple of days in Ottawa before heading to the United States. The visit sparked a cavalcade of columns about just how much Abbott and Harper have in common. Abbott, a conservative, called Harper “an exemplar of a contemporary, centre-right prime minister.” Both leaders want to hock their countries’ wares in Asian markets, where the Aussies have already gained a foothold. Harper might learn a few things from his politically kindred spirit.

5. Tracy Morgan recovers slowly. A Walmart truck driver on the New Jersey Turnpike collided with the 45-year-old comedian’s limo bus, which was returning to New York City after a show at the Dover Downs Hotel & Casino in Delaware. Morgan suffered a broken leg, femur and nose, as well as several ribs, and remained in critical condition after surgery to repair the leg. James McNair, a 63-year-old comedian known as Uncle Jimmy Mack, wasn’t as lucky. He died in the crash, which critically injured Morgan’s assistant, Jeffrey Millea, and comedian Ardie Fuqua Jr.