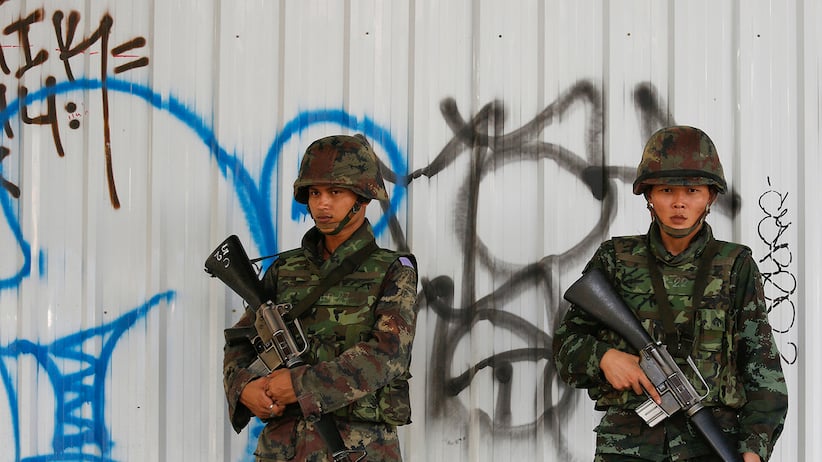 1. Thailand’s army declares martial law. That doesn’t mean the military is staging a coup d’état, said Thai army chief General Prayuth Chan-Ocha, whose tanks and troops now patrol the streets and control media outlets—but who also claims the army is simply keeping the peace. A 1914 law allows military brass to declare martial law without the approval of the country’s parliament. The caretaker government that replaced ousted prime minister Yingluck Shinawatra’s administration accepted the move, which comes after violent attacks on anti-government protesters last week after months of tension in Bangkok.

3. Women aren’t flocking to the Canadian Forces. One in four of Canada’s troops, pilots and sailors are supposed to be women, but recruiters have failed to meet those targets; instead, women comprise 15 per cent of the Canadian Forces, a proportion that has plateaued in recent years. The military is also failing to enlist aboriginals and visible minorities in hoped-for numbers. Military leaders proposed revised targets, reports the Ottawa Citizen, but the Canadian Human Rights Commission wants proof that current goals are unrealistic and that recruiters are truly working hard to sign up the desired groups.

4. Energy East could be the new Northern Gateway. Enbridge’s proposal to run a pipeline through British Columbia’s interior to port at Kitimat infuriates myriad aboriginal groups. Now, some aboriginal leaders will mount similar opposition to TransCanada’s plan to build a pipeline from the oilsands to eastern refineries. Selling that opposition to the Canadian public could prove more challenging than the still-unapproved Northern Gateway, however: former Assembly of First Nations National Chief Phil Fontaine is lending a hand to TransCanada, and the pipeline-skeptical NDP also supports the pipeline.

5. Oregon’s gay-marriage ban disappears. The American judiciary continues to swat down constitutional bans across the United States. Last week, same-sex couples in Idaho and Arkansas rejoiced at judges’ rulings that the bans were unconstitutional. What separates Oregon apart is that U.S. District Judge Michael McShane, himself an openly gay man, handed down the ruling—and the Democratic Governor, John Kitzhaber, welcomed the news.