The $20-million, two-year inquiry into the deadly mall disaster may now hinge on an anonymous tipster 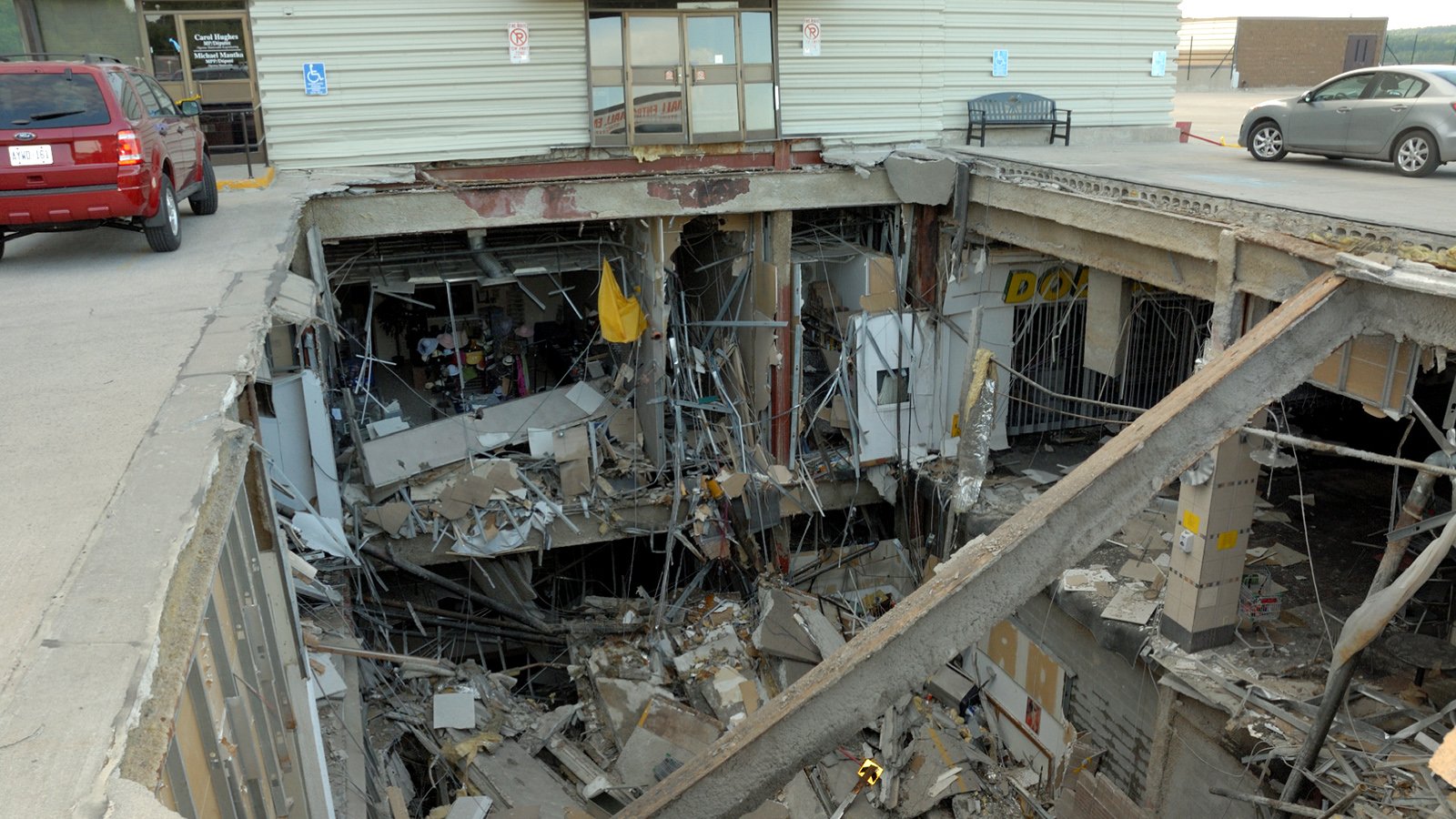 The envelope arrived on May 8, a Thursday, with no name and no return address. Tucked inside the package was an obscure slice of bureaucratic history: a report from the Ontario Ministry of Housing, circa 1988, written by an expert advisory panel on the “Deterioration, repair and maintenance of parking garages.” Attached to the document was one sentence (typed, not written) from the anonymous sender who dropped it in a mailbox. “Was this Ontario government report ever submitted to the Elliot Lake commission of inquiry for consideration?”

It never was, it turns out—and now Paul Bélanger, the retired judge overseeing the inquiry, wants to know if the brown envelope contained a critical piece of overlooked evidence. The commissioner has given Ontario until May 30 to explain, in writing, how the province responded to the report when it was first completed 26 years ago, and whether the government implemented any of the specific recommendations, including the creation of “a comprehensive repair and restoration program” for Ontario’s growing stock of rusting, decaying parking structures.

It is a surprising twist, to say the least. A $20-million exercise, the Elliot Lake inquiry has already spent nearly two years examining every aspect of the Algo Centre’s rooftop parking-lot debacle, from initial construction to subsequent inspections to the dramatic rescue effort that captivated the country in the summer of 2012. The province has been a key participant during the entire inquiry, yet for reasons that demand an explanation, it took an anonymous tipster to disclose (at the 11th hour) what could be a very relevant government report.

Knowing the end result in Elliot Lake—that decades worth of salty slush and rain leaked through the mall’s concrete parking deck, eating away at the steel-beam connections holding the roof in place—it is a heartbreaking document to read. It practically predicts what happened to Doloris Perizzolo and Lucie Aylwin, crushed under the enormous weight of the cave-in. “The majority of existing parking structures are subject to rapid and progressive deterioration, which may result in localized and unexpected structural failure unless repairs are carried out,” warned the 60-page report. “Structural integrity is of prime concern in evaluating deterioration of garages. If impaired, it must be restored and measures must be instituted to maintain the structure in a safe condition.”

Perhaps most intriguing for commissioner Bélanger is the fact that some of the same engineering companies that went on to inspect the Algo Centre’s ill-fated parking deck had senior employees sitting on the ministry’s parking-garage advisory committee, including Halsall Associates, Trow Group (now Exp Global Inc.) and Construction Control (now CCI Group). Gina Parvaneh Cody—one of the committee’s two coordinators back in 1988, and now president of CCI Group—personally signed off on a 2005 building condition assessment that found the doomed mall to be in “generally good condition,” and that “repairs to the roof framing are not currently required.” (Cody did not inspect the mall herself, and her company was hired to conduct a visual examination for a potential mortgage provider, not an exhaustive structural assessment. Contacted by Maclean’s, she did not respond to an interview request.)

The new-found report certainly wasn’t the first to sound the alarm about rotting parking garages. By the late 1980s, it was no secret that de-icing road salts were inflicting a disastrous toll on aging parking structures, both indoor and outdoor. That decade, the Canada Mortgage and Housing Corporation (CMHC) published three research reports about the troubling trend, including a 1986 document that recommended annual inspections by an engineer. “Due to their specialized functional requirements and the demanding environmental conditions under which they must perform, parking garages require periodic inspection and maintenance procedures that recognize their special status as structures,” the report reads, adding later: “Parking structure repairs will generally involve a compromise between what is technically possible and what is economically feasible.”

By 1987, the road-salt problem was so widespread that the Canadian Standards Association introduced S413, the first-ever guidelines for the design and construction of “durable” parking garages. That standard is now embedded in both the Ontario Building Code and the National Building Code of Canada.

To this day, however, there is no specific law governing the repair and maintenance of parking garages that already exist. As is painfully evident from the Elliot Lake tragedy, building owners can basically do nothing—even ignore the advice of an engineer—if they don’t want to pay for costly fixes. The Building Code does not establish minimum maintenance requirements for existing structures, and although most municipalities do have property-standards by-laws that demand buildings be structurally sound, enforcing those by-laws is an entirely different story.

The Algo Centre’s roof leaked relentlessly for more than 25 years before the city finally issued a notice of violation, compelling the owner to hire an engineer to assess the structure. A second notice of violation was issued three years later. The roof still collapsed.

So where does this newly discovered report fit into the Elliot Lake puzzle? Convened in 1986, the committee’s mandate was to recommend solutions “to address the $1-billion-plus provincial problem of chlorine-induced damage to existing parking garages,” not new ones. Completed in July 1988, the report’s key recommendation was to create, within four years, “a comprehensive repair and restoration program that is affordable, effective and enforceable.” The time “to develop and execute a provincial workplan will allow owners to fully assess the economic impact of this problem on those directly affected—the corporate, public and private sectors. The use of the workplan will allow owners to conceive a universal economic framework to support and make viable the unavoidable costs of effectively dealing with it.”

Whether the province ever enacted that “comprehensive repair and restoration program” is not clear; by press time, the Ontario government had yet to file its written material with the commission, describing what steps, if any, were taken. When contacted by Maclean’s, however, numerous committee members said they couldn’t recall such a plan ever being introduced. Said one: “It’s just another one of those government reports.” (“It died a natural death, I guess,” said another.)

Could such a program have prevented catastrophe in Elliot Lake? Like so much evidence in this case, it’s difficult to say.

The mall’s original owner, Algoma Central Properties, was well aware that the roof leaked from day one, and hired Trow engineers to conduct numerous structural assessments. Trow specifically recommended the installation of a waterproofing membrane, warning that continued leakage would weaken the parking deck. Algoma—already losing millions on its Elliot Lake investment—decided not to pay for a membrane.

When the mall was sold in 1999 to Elliot Lake Retirement Living (a community organization that recruits seniors to the once-booming mining town), another engineering firm, Halsall, laid out two repair options: installing a waterproofing membrane, or routing and resealing every crack in the parking lot concrete. Halsall recommended the second option, a decision that has been widely criticized by other experts. A team of forensic engineers who investigated the collapse also found that Halsall, unlike Trow, failed to “adequately provide a cautionary warning that future corrosion could potentially lead to the development of a critical condition if left untreated.” As a result, Retirement Living now insists it had no reason whatsoever to believe the mall could collapse. (Halsall disputes that position, saying it gave Retirement Living two options—“fix it or fix it”—and the owner exhibited “gross neglect” by attempting neither.)

When controversial businessman Bob Nazarian bought the building in 2005, profits repeatedly trumped repairs. On the inquiry witness stand, Nazarian himself admitted that the Algo Centre was a “black hole,” and investing money in his leaky roof was akin to throwing money “down the drain.” Even if the province had introduced a “comprehensive” plan for parking garage owners to follow, would that have altered his attitude?

“The repair business is a maintenance issue, and if an owner is not going to look at it and say: ‘Hey, something is wrong; we’d better do some investigation and repair it,’ well, nobody else is going to do anything,” says Michael Shirlaw, a retired civil engineer who sat on the advisory committee.

John A. Bickley, another engineer who served on the committee, is one of Canada’s leading experts on decaying parking garages. “I realized before most people that there was an epidemic,” says Bickley, now 86. “It was a massive problem across the country.” But if nothing ever came of the panel’s 1988 recommendations, he suspects it’s because the industry learned so much by the end of the decade that a province-led program wasn’t necessary. “There was lots of activity in the field, a tremendous amount,” he says. “There was lots of good advice out there, and I would regard it as the engineer’s responsibility, when he’s employed on a job, to be up to date on what is possible and what should be done.”

Commissioner Bélanger will make the ultimate findings of fact. His final report is due no later than Oct. 31. Assuming no other anonymous envelopes arrive in his mailbox.