In the span of a year, Ebola went from small outbreak to the kind of threat the world hasn’t seen in modern times 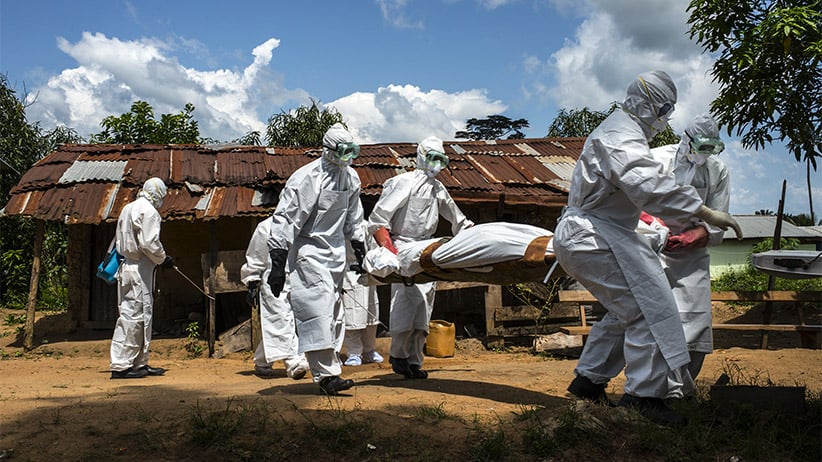 The body of Jacqueline Morris is carried to the back of a pickup truck by a county health burial team in Voinjama, Liberia. (Michel du Cille/The Washington Post/Getty Images)

Our 2014 Newsmakers issue looks at the big names and major events that made it the year that it was. To see our profiles of the year’s five biggest newsmakers, click here.

The worst Ebola epidemic in history began nearly a year ago, with one small boy. Researchers believe Patient Zero was Emile Ouamouno, a two-year-old from Guéckédou prefecture, Guinea. The toddler, who died in December 2013, may have eaten some fruit contaminated with bat droppings. Fruit bats are Ebola’s suspected natural reservoir; they harbour the virus but don’t get sick. Little Emile infected his mother, then his sister, and an outbreak was born. Ebola, which was previously unknown in West Africa, spread like fire among the urban, mobile population and soon spilled into nearby Liberia. On March 31, Médecins Sans Frontières called the situation “unprecedented.”

An outpouring of love caused the disease to take hold in neighbouring Sierra Leone in the spring, where a revered local healer caught a fatal case from Guineans who sought her help. After her death, hundreds of people gathered to pay their respects, touching and kissing her body—and her infectious body fluids—to say farewell. The funeral, linked to 365 deaths, was a viral grenade that blew Ebola in all directions. By the summer, there were thousands of new cases of the disease. On Aug. 8, the World Health Organization declared a public health emergency of international concern; a designation it has invoked only twice before.

The outbreak has brought the international community face-to-face with a type of threat it hasn’t seen in modern times. Images from the afflicted areas recall plagues of centuries past: panicked violence in a quarantined slum, the dead piling up too fast for the living to bury them. Joanne Liu, president of MSF, describes the scourge as simply “hell on earth.” 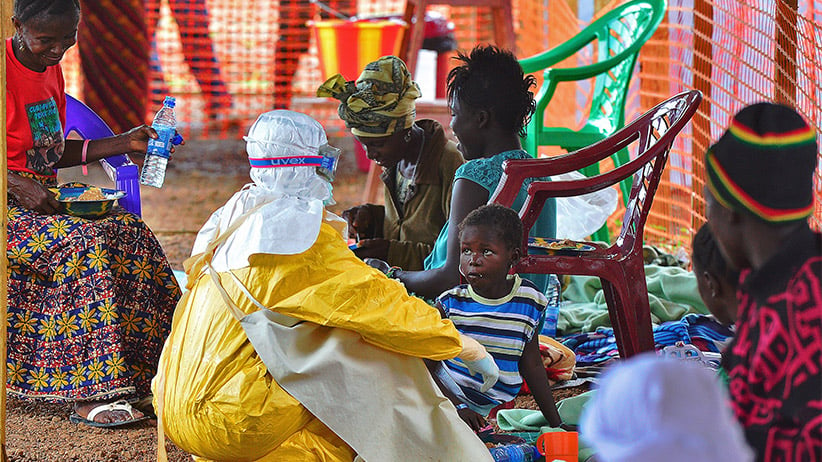 A viral illness that causes high fever, vomiting, and sometimes internal and external bleeding, Ebola has reportedly infected 15,935 people and killed 5,689 this year, mostly in the desperately poor countries of Guinea, Liberia and Sierra Leone. The real caseload is likely much higher, and the death rate is around 70 per cent. It has spread to five other countries, including Spain and the U.S.

Outbreaks of swift, gory, ultra-deadly diseases were de rigueur before the dawn of vaccination and modern sanitation, but today they’re “out of living memory in the developed world,” says Jonathan Vance, history professor at Western University in London, Ont., adding that a threat doesn’t have to be real to cause terror. Vance, who teaches a course on panic and paranoia, sees the hallmarks of mass hysteria in North America’s response to Ebola. Conspiracy theories abound. There’s a disadvantaged group at hand (Africans) to blame for the disaster. Most of all, our fear of Ebola is out of proportion with reality.

Public health agencies say Ebola is calamitous for West Africa, but not likely a big threat to the West. Its transmission, through direct contact with body fluids, can be stopped with adequate infection control, which most developed countries can manage. Yet Canada has stopped processing visas for foreigners who have been to the affected countries, despite the WHO’s protests that such measures are unnecessary. Some U.S. states have come under fire for enforcing 21-day quarantines (the maximum incubation period) on returning health workers, though Ebola is only contagious once symptoms appear.

Related reading: How safe are we from Ebola?

Why do we find Ebola so scary? It isn’t the first 21st-century epidemic. Cholera in Haiti killed thousands more (and it isn’t over). H1N1 influenza infected a fifth of the world’s population in 2009. But diseases with horrifying effects on the body tend to cause the most panic, even if gruesome ones such as tuberculosis kill far more people, Vance says. Unlike flu or cholera, Ebola is usually deadly, and there’s no vaccine or proven medical treatment.

In fact, experimental Ebola drugs and vaccines gathered dust for years. There was little incentive to develop them. Before now the virus had infected only a few thousand people, nearly all in Africa. Hasty human trials are now under way for two vaccines. One was developed at the National Microbiology Laboratory in Winnipeg, which also had a hand in the design of ZMapp, an experimental antibody therapy for Ebola that has shown promise in animal experiments. A handful of people have taken it, mostly Westerners evacuated after being infected overseas. Its usefulness is unknown. ZMapp or no, the survival rate for those getting supportive care in world-class hospitals is encouragingly high: eight out of 10 patients treated in the U.S.

Thomas Eric Duncan, the Liberian traveller who brought Ebola to North America in September, was a notable exception. Initially misdiagnosed in a Texas emergency room, he was at death’s door by the time he was admitted to hospital. He passed away a week later, first infecting two nurses. Both were treated early and recovered, but mishandling of the case ignited panic about Ebola preparedness. Duncan garnered far more attention than any Ebola patient in West Africa, the epicentre of the crisis and the suffering.

Related reading: Dr. Tim Jagatic on being on the front lines of the fight against Ebola

There, local health systems, tepidly recovering from decades of civil war, have crumbled on impact. Crucial health workers have fallen by the hundreds—570 sick and 324 dead so far. Some experts fear the death toll for want of basic care will exceed that of Ebola itself. Relief is coming: U.S. troops are building field hospitals, a UN mission has launched, and Canada has pledged $60 million in aid. Still, local people like Miniratu Conteh form the backbone of the fight. Coneh works seven days a week at an Ebola hotline in Freetown, Sierra Leone, keeping tabs on the sick from the time they’re tested until death or discharge from treatment. She wears her best clothes to work on Sunday. There’s no time for church. She prays at home, fervently wishing, “this sickness will dissolve from our country . . . that this will happen tomorrow.”

Depending on the public health response, we may see up to tens of thousands to more than a million cases before the epidemic ebbs. There’s little sign of improvement yet, but a recent slowdown in Liberia is reason for hope. 2014 was a very modern kind of plague year. It’s possible we’re in for another.