Newsmaker of the Day: Marcia Visser, crusader against 'density creep'

Newsmaker, May 25: A tone-deaf campaign against a four-storey Toronto condo tower takes Nimbyism to new heights 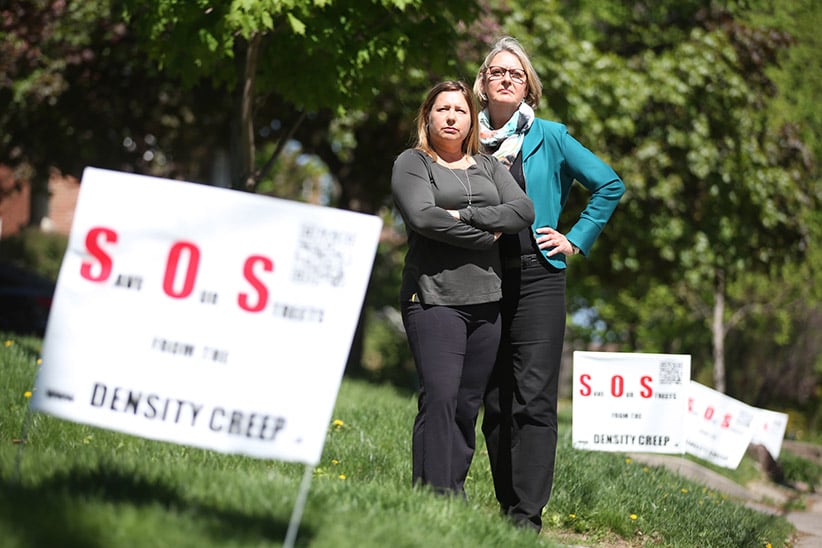 Marcia Visser (right) and Lisa Goodwin are members of the Density Creep Neighbourhood Alliance, which formed to stop a townhouse complex from being built in their Yonge and Eglinton neighbourhood. (Vince Talotta/Toronto Star/GetStock)

Nimbyism is nothing new in Canadian cities—particularly when the threat is multi-storey condos or apartments in otherwise low-rise neighbourhoods. But the efforts of Marcia Visser and about 50 local residents to keep a proposed 80-unit complex from going up on one midtown Toronto street seems particularly tone-deaf, and has generated a quick backlash on social media.

At issue is a developer’s proposal to knock down eight homes on a leafy side street in north Toronto and replace them with a four-storey stacked condo building that will feature the usual glass balconies and rooftop patios. While it’s not unusual for such developments to stir locals’ fears about the potential neighbourhood impact, the residents trying to stop the Sherwood Park Modern Towns seem more concerned about their bulging bank accounts than the community they’re ostensibly trying to protect. “I’m really concerned about my property value going down,” one 49-year-old homeowner told the Toronto Star. “Right now all the houses are $1.1 million to, say, $2.2 million, but they are looking to put in condos that are only $500,000.”

In another curious move, the residents’ group has decided to call itself the “Density Creep Neighbourhood Alliance.” (Eds. note: If you were to click your way to densitycreep.com, an enterprising snarkster has already purchased the rights and redirected the page to the Wikipedia definition for NIMBY.) The implication is that density—a key feature of modern urban planning credited with making big cities like Toronto desirable places to live in the first place—is something to be beaten back in favour of more sprawling suburbs. Visser, of course, was careful to point out that the group isn’t against all development, but merely development that’s out-of-character for specific neighbourhoods—like the one they’re rallying to the defence of in North Toronto.