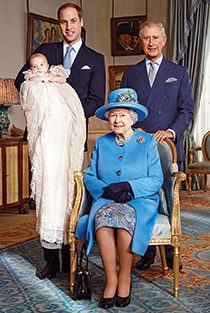 On Oct. 23, tiny Prince George—just three months old, and third in line to the throne—was christened in the Chapel Royal at St. James’s Palace in London. At the small ceremony were senior royals and members of the Middleton family, as well as the young prince’s seven godparents, who include William’s former aide Jamie Lowther-Pinkerton and Julia Samuel, a close friend of Diana, princess of Wales. Afterward, the family gathered for a rare portrait that shows four generations of current and future monarchs together. Prince George, held by his father, Prince William, wore a lace-and-silk christening gown, a replica of the one created in 1841 for Queen Victoria and Prince Albert’s first child, Princess Victoria Adelaide Mary Louisa.

Former Three’s Company star and Thighmaster maven Suzanne Somers has waded into the U.S. health care debate, penning a Wall Street Journal op-ed that’s prompted its own critics. “Medical care will be degraded, the costs will skyrocket and, most frightening of all, your most intimate and personal information is now up for grabs,” writes Somers, who also cites, semi-accurately, a 2008 Maclean’s cover story: “I was startled to see the cover of Maclean’s, a national Canadian magazine, showing a picture of a horse on an examining table with the headline, ‘Your horse can get better health care than you.’ ” While the cover was actually of a dog, it wasn’t her most egregious error, as the Wall Street Journal appended a correction to the piece: “An earlier version of this post contained a quotation attributed to Lenin (‘Socialized medicine is the keystone to the arch of the socialist state’) that has been widely disputed. And it included a quotation attributed to Churchill (‘Control your citizens’ health care and you control your citizens’) that the Journal has been unable to confirm.”

Whether in New York, London, or Toronto, fashion shows can be rarefied events. When São Paulo Fashion Week’s director Paulo Borges kicked off his blockbuster event on Sunday, he decided to take things a bit further, sending models onto the city’s subway system. The unusual show was the first official event of Latin America’s biggest fashion showcase, which is celebrating its 15th year; the in-transit display featured models wearing some of the most provocative designs from previous years. Fashion can live in a museum, the street, or “in the subway,” Borges said. “It can go anywhere.” No word on how harried commuters felt sharing the famously crowded subway cars with models in full regalia.

After four decades of serving Heinz in its restaurants, McDonald’s has announced it will be phasing out the iconic ketchup brand. This comes after Bernardo Hees, the one-time CEO of Burger King—and McDonald’s fierce competitor—took the reins at Heinz, in June. Hees, who was named the company’s CEO after the condiment maker’s sale to Warren Buffett’s Berkshire Hathaway Inc. and investment fund 3G Capital, continues to serve on Burger King’s board of directors. With that, two iconic brands look set to part ways. Nothing, it seems, runs thicker than blood—or ketchup.

No reservations about seal meat

Celebrity chef Anthony Bourdain turned to Twitter to speak out against a U.S. campaign to boycott Canadian seafood in protest of the seal hunt. “I’m all for protecting seals, but a total ban dooms the indigenous people above the Arctic circle to death or relocation,” tweeted the author behind Kitchen Confidential, directing his message to Danny Bowien, the co-founder of New York’s Mission Chinese Food restaurant. Bowien has been pictured with a seal mascot as part of the Humane Society’s Chefs for Seals campaign, which aims to boycott Canadian seafood and has enlisted more than 6,000 restaurants. “To hold the entire Canadian seafood industry hostage over sustainable, absolutely necessary tribal practice is ill-considered,” Bourdain added. The chef is familiar with Inuit traditions. In 2006, he travelled to northern Quebec for his television show No Reservations, where he hunted seal, then ate the raw meat with an Inuit family.

Canadian tennis stars are suddenly on the rise, at home and abroad. In her first full season on the Women’s Tennis Association Tour, Montreal’s Eugenie Bouchard skyrocketed to 32nd in the world and, in a memorable moment, upset Ana Ivanovic at Wimbledon’s Centre Court. Some predict the 19-year-old could become Canada’s best female tennis player yet—but on her road to fulfilling that prophecy, she’s decided to dump coach Nathalie Tauziat for Nick Saviano, who will be working with her mainly in Florida during the off-season. Meanwhile, Tennis Canada president Michael Downey has been named the new chief executive of the Lawn Tennis Association, the governing body of tennis in the U.K. “He gets very involved emotionally, because he wants you to do well,” rising Canadian tennis star Milos Raonic told the Independent newspaper. “He really cares about the players.”

He’s been a test pilot, an astronaut, a social media celebrity and the first Canadian to head the International Space Station—and now Chris Hadfield is a published author. An Astronaut’s Guide to Life on Earth, his first book, excerpted in Maclean’s, was released this week. Beyond his authorial duties, Hadfield (who retired from the Canadian Space Agency in June) recently accepted a post at the University of Waterloo, where he’ll be advising aviation programs and teaching. There, he will continue his work with Canadian scientist Richard Hughson, who studies cardiovascular health in space—and has used Hadfield as his most famous guinea pig.

On Oct. 24, before announcing her retirement, Canadian hurdler Perdita Felicien tweeted that it felt like a race day: “major butterflies.” “It has been a cocktail of triumphs, a cocktail of defeats. It’s a mishmash of everything,” she said of her career. She’ll be joining CHCH in Hamilton as a videographer.