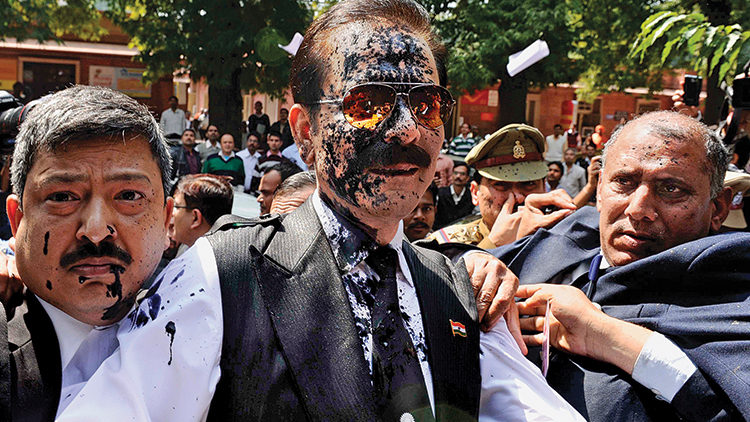 A white-collar job: Flamboyant tycoon Subrata Roy, accused of multi-billion-dollar fraud, was attacked with ink outside a New Delhi courthouse.

Our future king’s first official overseas trip will be down under. The duke and duchess of Cambridge announced this week that they will be taking the young prince for a three-week jaunt in Australia and New Zealand in April, closely following the itinerary of Prince William’s own ?rst of?cial trip when he was nine months old. In fact, the whole affair will be a mirror image: Back in 1983, it was Princess Di’s first official trip as a new mother, as it will be this time around for Kate. The family will also fly together, flouting royal protocol as Charles and Diana once did. Rachel

The New Jersey honour-roll high-schooler ran away from home this past fall. That’s not so unusual—she is 18, after all. What came next, though, was odd: Supported by a friend’s lawyer father, Canning sued her parents to cover private school tuition and living expenses, alleging her parents had abused her. The Cannings denied the charge, calling their daughter a spoiled liar rebelling against boundaries, and citing the opinion of a state official who visited the family. This week, a judge sided with the parents, striking down the unusual suit. In a depressing twist, the court hearing marked the first time Rachel had seen her parents since October.

The Canadian fashion executive, whose most recent innovation is compression pants for women, believes himself to be the next Ponce de León. In a new YouTube video, Nygård—surrounded by flowers in his Bahamian compound, leaning back in a throne engraved with lions—insists that people can live forever. And thanks to “reverse aging” stem-cell injections the 70-year-old is currently taking, he’ll let you know how immortality goes for him, first. “From the woman’s egg, we took out her DNA, put my old 70-year-old DNA in its place [and] grew it in vitro,” says the Helsinki-born entrepreneur. “This is a game-changer. This could eliminate all disease.”

The Quebec premier’s so-called values charter has fomented much controversy for its perceived anti-anglophone implications, but at least one person found it funny. Abdul Butt, from CBC’s This Hour Has 22 Minutes, ambushed Marois in Gatineau, Que., telling her he was a “huge fan” of her “comedy.” “The English-language ban, is that a real joke?” Butt asked. At least Marois responded better than Toronto Mayor Rob Ford did after a similar stunt from the series: Instead of calling 911 on the TV crew, Marois simply refused to acknowledge the bit. Maybe because the question was in English.