One ticket to paradise, This story has legs, and Daughter knew best

One ticket to paradise
The alleged mastermind of the 9/11 attacks will soon have his day in court. But much to the chagrin of some relatives of the 2,751 who died in the World Trade Center attack, the fate of Khalid Sheikh Mohammed will be decided in a civilian trial on U.S. soil, not far from Ground Zero. Mohammed, who has been dubbed “one of history’s most infamous terrorists,” is one of five suspects who will be transferred from Guantánamo Bay to New York. His chances of acquittal may be slim, but the jury will also hear of the waterboarding and other measures used in his interrogation. After admitting his guilt to an Al Jazeera reporter in 2002, Mohammed confessed at a closed-door review at Guantánamo Bay: “I was responsible for the 9/11 Operation from A to Z.” Prosecutors say they will seek the death penalty. A conviction could speed Mohammed along on his self-proclaimed path toward martyrdom.

This story has legs
Any doubt Sarah Palin is overexposed was put to rest this week when the latest Newsweek hit the stands. There, in full, fetching colour, is a leggy portrait of the ex-beauty queen, ex-vice-presidential candidate and ex-governor of Alaska. The very ex-y Palin has one arm resting on an American flag and the other on a cocked hip. Less flattering is the headline: “How do you solve a problem like Sarah?” Palin is everywhere now, flogging her bestseller, Going Rogue, in which she dishes about the media, being “bottled up” by Republican strategists, and her abiding faith in “God and Todd” (her husband). As for the come-hither photo, she complains on Facebook, “The out-of-context Newsweek approach [is] sexist, and oh-so-expected by now.” True, she posed for the picture, but it was intended for Runner’s World, where legs are just things you run with.

Daughter knew best
Carter Spencer, 39, was drunk and high on cocaine last October when he plowed his truck into Christopher Raymond Kniffen, a 19-year-old skateboarder, at a Regina intersection, leaving Kniffen to die in the street while he drove on to his cousin’s and had a couple of more drinks. The next day, Spencer washed his car. Nothing would have connected him to the fatal hit-and-run had Spencer’s own 13-year-old daughter not contacted police and given a statement 2½ weeks later. “His 13-year-old daughter demonstrated more responsibility than he did,” Crown prosecutor Sonya Guiboche told the court. Last week, Spencer pleaded guilty to driving while disqualified and to leaving the accident scene knowing someone was injured. He has 32 criminal convictions, seven of them for driving offences, and had been stripped of his licence after failing to pursue a substance-abuse program. Sentencing is scheduled for later this month.

Hush-up money
Lou Dobbs has used his bully pulpit at CNN for increasingly oddball debates surrounding illegal immigrants and the “birther” movement, which claims U.S. President Barack Obama was born outside the U.S. and is ineligible for office. How does one top that? It’s a question Dobbs is trying to suss out now that he’s left CNN, the news network that was his home for almost 30 years. Rumours have him heading over to rival Fox News or even running for president. The gossip also has him getting dropped rather than quitting the CNN punditocracy. The New York Post reports the network was so maddened by his move to the right and so worried it would tarnish the network’s reputation that it agreed to grease his departure with $8 million.

The fight of his life
When Kareem Abdul-Jabbar started having hot flashes last year, the NBA Hall of Famer says, “I knew something was up. But I didn’t think it was going to be something as serious as leukemia.” As the 62-year-old recently revealed, he was diagnosed last December with Philadelphia chromosome-positive chronic myeloid leukemia, a rare form of cancer of the blood and bone marrow. But despite the frightening moniker, the disease can be controlled with medication and regular checkups. So far, says Abdul-Jabbar, so good: “I responded well to the treatment. I just want that to continue.”

Plus you can’t even get HBO
Accused murderer and gang leader Jamie Bacon of Abbotsford, B.C., has a new cell outfitted with a fridge, toaster and microwave, but it hasn’t stopped a litany of complaints over his treatment at the Surrey Pretrial Centre. Bacon’s lawyer, Kimberly Eldred, is seeking to have him moved out of isolation and into the general prison population as he awaits trial in connection with the murder of six men in a Surrey, B.C., apartment. Eldred told a B.C. Supreme Court judge that Bacon’s six months in isolation constitute cruel and unusual punishment. Although he was moved to a refurbished cell after previous complaints, she says Bacon can’t see his TV from his bed. As well, the cell, unlike the previous one, lacks a shower, “the one thing in life he could control.” Lawyers for the prison told the hearing he remains in isolation to keep him safe and to prevent him from conducting gang business. There were attempts on his life before his arrest.

Lady Love keeps her day job
By day she is Brooke Magnanti, a researcher in developmental neurotoxicology and cancer epidemiology in Bristol, U.K. But online, in British bookshops and on the telly she’s the previously anonymous Belle de Jour—a semi-fictional London call girl. Magnanti outed herself this week because of concerns a former boyfriend would reveal her secret. She admits she bases her writing on her experience working as a $530-an-hour escort in 2003 as she struggled to finance her Ph.D. Her body of work spawned the TV series Secret Diary of a Call Girl, broadcast on Showcase in Canada. Reaction from her scientific colleagues, she says, has been “amazingly kind and supportive.”

Rocking the boat
Gordon Cruse, a 67-year-old retired corrections worker at Victoria’s Youth Custody Centre, used to be a pirate, but not the bad kind. Calgary-born Cruse was one of the original outlaws beaming taboo rock ’n’ roll into British homes from Radio Caroline, a ship broadcasting offshore to thwart staid 1960s-era radio regulations. His primary job was reading the news, but he also spun rock records, the kind the BBC was still too stuffy to play (the Beatles, the Stones). Authorities shut down the outlaw stations in 1967, but their antics are now immortalized in the hit comedy Pirate Radio, a film Cruse has already seen five times. “Changing British radio as the pirates did was a once in a lifetime excitement immeasurable in its scope,” he once told the BBC. “To be part of that—me, a humble Canadian flatlander—is a unique and exceptional experience.”

Yes, he went to the Wall—but when?
A host of world leaders and everyday East Germans claim credit for tearing down the Berlin Wall; last week French President Nicolas Sarkozy chipped in with his own version of events. His Facebook posting had him rushing to the Wall on Nov. 9, 1989, as giddy crowds of Berliners bashed away at the concrete monstrosity. He posted a photo of his 34-year-old self wielding a hammer against a graffiti-covered part of the structure. But critics are skeptical Sarkozy was that fleet of foot, considering news reports have him in France that day in 1989. While he was clearly there in the early days of the Wall’s demise, even former prime minister Alain Juppé, who accompanied Sarkozy, says he is unsure about the date. Sarkozy is sticking to his story, but former Socialist presidential candidate Ségolène Royal isn’t buying it. She jokes it is equally likely he was at the Bastille in 1789. 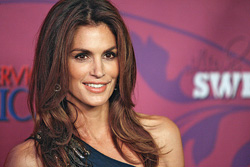 Worth a thousand words? Try $100,000.
It was a shocking offer for former supermodel Cindy Crawford. Last summer, a man allegedly contacted Crawford and her entrepreneur husband, Rande Gerber, threatening to go public unless they bought a photograph of their seven-year-old daughter, gagged and tied to a chair. The couple instead brought the matter to authorities, who deported 26-year-old Edis Kayalar, of Germany, for being in the U.S. illegally. Refusing to take no for an answer, Kayalar is said to have called the family again, this time demanding $100,000 for the photo. Kayalar, reportedly on vacation in Turkey, has been charged with extortion in the U.S. and is under investigation in Germany. As for the photo, it was taken without Crawford’s knowledge by a former nanny during a game of cops and robbers. The picture was allegedly stolen from the nanny.

Mama was a dealer at MotorCity
Joe Cada knew the odds weren’t in his favour when he dropped out of community college to commit to poker full-time. “You have to be very careful when you decide to make it a living. More people lose than win.” So far, the gamble has paid off. In November, the 21-year-old Michigan resident became the youngest person in the history of the World Series of Poker to take home the jackpot. Cada, who will be sharing the US$8.55-million prize with the backers who helped pay his entry fee, comes by his card-playing prowess honestly. His mom is a dealer at Detroit’s MotorCity Casino, and family gatherings, says his uncle, “always seemed to end up in a card game.”

Another Obama speaks
This Obama lives far from the White House, in a rented flat in the southern Chinese city of Shenzhen. Mark Okoth Obama Ndesandjo shares a father with his half-brother, the U.S. President. Barack Obama Sr. affected the two men in different ways. The President has written of the abandonment he felt when his father left when he was two. His half-brother’s autobiographical novel portrays their father as an abusive alcoholic. “His mother was being attacked and he couldn’t protect her,” he writes of one assault. “And that was just one night. There were many more.” Mark was born in Kenya to his father’s third wife. The two half-brothers have had little contact. Barack Sr. died in a car crash in Kenya in 1982.