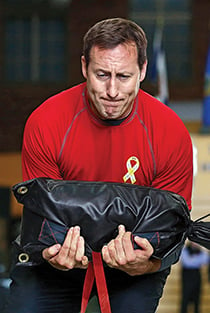 Out with a bang

The now former Groupon CEO Andrew Mason is known for being a bit eccentric—a reputation he upheld on his way out. “After 4½ intense and wonderful years as CEO of Groupon, I’ve decided that I’d like to spend more time with my family. Just kidding—I was fired today,” Mason wrote in a letter to staff last week. “I’m OK with having failed at this part of the journey,” he added. But don’t cry for the Groupon founder. Getting fired made him $34 million richer this week—Mason owns seven per cent of Groupon’s stock, which rose five per cent in the days following his exit.

David Beckham bragged about doing all of his own stunts for his action-packed H&M commercial, but when it came to flashing a close-up of his bottom, he let a body double take over. The soccer star repeatedly denied using a stand-in for the Guy Ritchie-directed underwear ad—which shows him sprinting, swimming and jumping hedges, all in his gitch—but H&M finally came clean last week: “Due to the tightness of Beckham’s schedule, a body double was used in parts of the video.”

Out of this world

Having conquered Earth, at least in the eyes of his fans, Justin Bieber shared his next ambition with his 30-million-odd Twitter followers last week: “I wanna do a concert in space,” he wrote. The space agency NASA was quick to tweet a reply, referencing one of his hit songs: “Maybe we can help you with that. All Around the World, next off it?” Whether the Bieb gets to be an astronaut or not, he’s clearly training for something. After a concert in Birmingham, England, last week, he bee-lined to his hotel to change for his 19th birthday bash. He just happened to strut into his hotel with his shirt off, displaying an impressive ab six-pack.

It’s a safari on a plate

Europe’s horsemeat scandal seems tame compared to the exotic meats South Africans have been ingesting. Maria Eugenia D’Amato of the University of the Western Cape’s DNA forensics lab says researchers were curious to know which animals laid down their lives for biltong, the famous dried meat jerky snack. “One piece of dried meat,” D’Amato told Reuters, “looks like another.” Curiosity, as they say, killed the cat. Fortunately not this time. But they found 90 per cent of “wild” biltong—usually labelled as being made from kudu, a large antelope—was actually made from horse, pork, beef, giraffe—even kangaroo. Meanwhile tests at Stellenbosch University found that beef burgers and sausages were not quite as advertised. In addition to surreptitious pork and chicken they found goat, donkey and water buffalo. The mislabelling violates regulations, co-author Louwrens C. Hoffman told the AP, and “poses economic, religious, ethical and health impacts.”

David Radler was named interim publisher of the Victoria Times-Colonist last week. The last time Radler was making headlines, in 2007, he was testifying against his friend and former business partner of 30 years, Conrad Black; together, the pair had run Hollinger, the newspaper group. Radler, the prosecution’s chief witness against Black, served 10 months in a Canadian jail for mail fraud. Black served 42 months in a Florida prison on fraud and obstruction charges. Radler, who lives in Vancouver, runs the Alberta Newspaper Group, a subsidiary of Glacier Media, which bought the Times-Colonist in 2011.

Do you know Jack?

It is apparently never too soon for CBC biopic treatment: Jack, the story of Jack Layton’s life, love, last campaign and final days, airs this week on the CBC. Olivia Chow, Layton’s widow, played by Sook-Yin Lee in the film, had few quibbles with the portrayal: “It’s a movie,” said Chow, after the Toronto screening this week. “Jack and I actually didn’t kiss that much.”

Former Polish prime minister and Nobel Peace Prize winner Lech Walesa is known for championing human rights—with the exception, it appears, of those belonging to gays and lesbians. Gay men and women, he said in a TV interview this week, have no right to serve in the Polish parliament—but if they do, they should sit at the back or “behind a wall.” Walesa, 69, an icon of the democratic left who helped Poland form its first democracy, added that gay people should learn to “adjust” and not impose themselves on the majority. Many Poles, however, appear to be adjusting to reality; last year they elected Poland’s first openly gay and first transsexual MPs.

Turkey gets a roasting

Speaking of antiquated views, Turkey’s Prime Minister Recep Tayyip Erdogan isn’t backing down for branding Zionism—the movement for a Jewish nation in what is now Israel—a “crime against humanity.” The comments were condemned in a release by Israeli Prime Minister Benjamin Netanyahu’s office, which called them, “A dark and mendacious statement the likes of which we thought had passed from the world.”

To hear Mitt Romney—remember him?—tell it, his failed run for the presidency was a wild and wonderful roller coaster ride. “Exciting and thrilling, ups and downs. But the ride ends,” he told his friends at Fox News last week, in his first interview since losing the election. “And then you get off. And it’s not like, ‘Oh, can’t we be on a roller coaster the rest of our life?’ ” Not, one suspects, if the Republican party has a say. Ann Romney said their life in the Mormon church prepared them for the adjustment. “You can be in a very high position, but you recognize you’re serving. And now all of a sudden you’re released and you’re nobody,” she said. While the change was still a shock, she said, “fortunately, we like each other.”

Sticks and stones, and words

Shane Koyczan, the Penticton, B.C., spoken-word poet who electrified the 2010 Vancouver Olympic Winter Games opening ceremony with his poem We Are More, has done it again. His anti-bullying video, To This Day, was released on YouTube last week and has already generated almost six million views. He was invited to address the TED conference in Long Beach, Calif. He told the crowd of intellectuals, philanthropists, scientists and others about the taunts and jeers he suffered as a child because of his weight. He was taken aback when the room’s 1,400 over-achievers leaped to their feet when he finished. Conference executive producer June Cohen hugged him as he left the stage. “My heart is in my throat,” she said. Many in the room may also have been labelled geeks and outcasts in childhood, Koyczan told the Vancouver Sun. “Really the object of the project was to put an arm around the shoulder of somebody who needs it.”

University fraternity houses are not often seen as beacons of enlightenment, but the brothers of Phi Alpha Tau at Boston’s Emerson College, have shattered the stereotype. Student Donnie Collins, who was born a girl but began living as a male at 17, was welcomed as a brother when he sought to join Phi Alpha Tau. “Donnie’s status as a trans student was a non-issue,” Tau Zaman, a senior, told WHDH TV. “We just thought he was an outstanding man.” So well was he accepted that when his insurance company denied his claim for sex-change surgery, his frat brothers launched a fundraising campaign. The original goal was about $8,000, but more than double that has been raised for a foundation that helps gender transition surgeries. “My life has been absolutely changed by pledging this fraternity,” Collins said in a video on YouTube. Christian Bergren-Aragon, a sophomore, said the real issue wasn’t the money raised: “It’s about telling a story of transformation, self discovery and brotherhood.”

Floridian Jeffrey Bush, 37, met a horrific end last week; he was lying in bed after a day’s work when a sinkhole opened up under his bedroom and swallowed him whole. When Bush screamed, his brother, Jeremy Bush, jumped in after him, but was unable to rescue him. The house in Seffner, a Tampa suburb, was deemed too unstable to enter and was demolished this week as family members looked on.

The push seen around the world

A young cliff jumper may have pushed his girlfriend too far when he shoved her off a 400-foot drop in a narrow Utah canyon in a harness. In a video that went viral this week, Creighton Baird tries to coax his girlfriend, Jessica Powell, to overcome her fears and jump—and when she didn’t, he gave her a gentle shove. “I’m breaking up with youuuuuuu!” Powell screamed while falling. Baird, 27, laughed so hard he fell over. “I just got dumped,” he cried. Although Powell later hugged Baird, thanking him for helping her face her fears, the pair has since parted ways.

Defence Minister Peter MacKay announced an “updated approach” to military fitness that aims to replicate the “physical demands” of military ops, and predict how well a soldier will perform. MacKay himself is in training, of sorts. He and his wife, Nazanin Afshin-Jam, are expecting their first child, a boy, at the end of the month.