Jean Chrétien breaks waves, Yahoo! bets it all on blogs and Shary Boyle is finally ready for her close-up 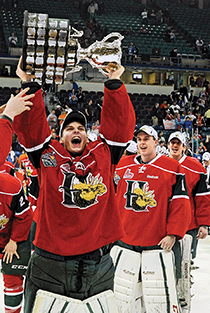 What could conjure up feelings of impending summer more than a glassy body of water on a sunny day—and Jean Chrétien cruising through the scene on a wakeboard? A new video posted to YouTube shows the former prime minister, 79, learning how to wakeboard in Buxton, N.C. Next time, according to the minute-long clip, he’s going to try kitesurfing.

Their cup runneth over

The Halifax Mooseheads made hockey history this week after capturing the Memorial Cup in Saskatoon. Thanks in no small part to a hat trick by 17-year-old star forward Nathan MacKinnon, the Mooseheads skated off with a 6-4 win over the Portland Winterhawks, delivering the first Canadian Hockey League championship for the Maritime team. “I just try to keep it simple and work hard and lately, things have been going my way,” said MacKinnon, who won the tournament MVP.

Blue movies on the Croisette

Such marquee names as Nicole Kidman, Marion Cotillard and Leonardo DiCaprio may have ruled the red carpet at Cannes last week, but the real star was an intimate three-hour French lesbian romance, which walked off with the film festival’s top prize. Blue Is the Warmest Colour, which chronicles the intense relationship between two students, features acclaimed turns from leads Adele Exàrchopoulos and Lea Seydoux, as well as an explicit sex scene that lasts nearly 10 minutes. The Palme d’Or, awarded by a jury led by director Steven Spielberg, was shared between the actresses and director Abdellatif Kechiche.

The twist-filled tale of Arthur Porter may finally be coming to a close. The oncologist and former head of Canada’s spy-agency watchdog was arrested with his wife, Pamela, in Panama this week, charged with multiple counts of fraud. Porter, who resigned as CEO of McGill University Hospital Centre (MUHC) in 2011, is accused by Quebec police of accepting payments from SNC-Lavalin executives in exchange for securing a $1.3-billion MUHC construction contract. During his time with MUHC, Porter was appointed by Prime Minister Stephen Harper to head the Security Intelligence Review Committee, a civilian body that monitors the activities of CSIS. The couple had been living in Nassau, Bahamas, where Porter said he was treating himself for terminal lung cancer.

Dust in the bin

Karen Nelson, an archivist at Lawrence Berkeley National Laboratory in Berkeley, Calif., was sorting through artifacts recently when she uncovered something unusual: about 20 vials with handwritten labels dated “24 July, 1970,” containing moon dust. The samples were brought back for study by Neil Armstrong and Buzz Aldrin’s mission in 1969, but instead of being sent to NASA after they’d been analyzed, they were tucked away, only to be rediscovered more than 40 years later. “We don’t know how or when they ended up in storage,” says Nelson, an archivist of 17 years. The vials have been sent back to NASA for safekeeping.

Betting a billion on blogs

Since she took over at Yahoo! last July, Marissa Mayer, 37, has been on a spending spree as she fights to put the Internet giant back on top. Yahoo recently agreed to pay $1.1 billion (mostly in cash) for the blogging site Tumblr, which has more than 100 million users worldwide. It’s the biggest—by far—of nearly a dozen acquisitions Yahoo has made with Mayer at the helm. She hopes Tumblr will help bring in more young and active Internet users, though observers said the purchase was enormously bold and risky. On her own Tumblr, Mayer promised “not to screw it up.”

A rather ‘boring’ victory

On May 26, Toronto Blue Jays shortstop Munenori Kawasaki stepped up to bat in the ninth inning—the Jays trailing the Baltimore Orioles 5-4—and hit a fastball to left-centre that won the game. Following his walk-off double that earned the Jays a 6-5 victory, Kawasaki and his teammates received a standing ovation. If he was popular before, though, the Japanese player’s post-game interview assured him a spot as the new fan favourite—both in Toronto and beyond. Pulling out a Japanese-to-English phrasebook, Kawasaki said: “I did it. Give me a hug. It was boring.” His teammates promptly hit him with a shaving-cream-filled pie and doused him in Gatorade.

A group of about 35 runners who were unable to complete the Boston Marathon this year amid the event’s tragic bombings, banded together this weekend to finish their last mile at the Indianapolis Motor Speedway. Thousands applauded as the runners—some of them in tears—made their way down the speedway’s final stretch. Officials of the Indianapolis 500 chose to honour Boston Marathon runners who were pulled off the course mid-race on April 15, when the bombs detonated, killing three and injuring more than 250.

On May 14, Angelina Jolie revealed in a New York Times op-ed that she recently underwent a double mastectomy to avoid her mother’s fate of developing and succumbing to cancer. This week, the actress learned that her aunt, Debbie Martin, the 61-year-old younger sister of her late mother, passed away from breast cancer in a California hospital. Like Jolie, Martin was a carrier of a “faulty” gene called BRCA1, which increases a woman’s chances of developing breast cancer and ovarian cancer (Jolie’s mother passed away from the latter). Ron Martin, Debbie’s husband, told the Associated Press that his wife did not know she was a carrier of BRCA1 until she was diagnosed with cancer in 2004. “Had we known, we certainly would have done exactly what Angelina did,” he said.

Budding fan-fiction writers are rejoicing in light of Amazon.com Inc.’s announcement that it will launch “Kindle Worlds,” an online platform where literature fans can publish and sell their own spinoff ebooks (think Fifty Shades of Grey as a business model). Amazon plans to license the fan fiction, sell it through its Kindle ebook store and then, depending on the length of the novels, give fan-authors a 20 to 35 per cent cut of sales.

What a girl really wants

Former child star Amanda Bynes, whose most recent role was a supporting part in 2010’s Easy A, has finally caught the world’s attention—just not for her acting skills. The 27-year-old, dressed in sweatpants and a platinum-blond wig, appeared in a Manhattan courtroom last week, charged with possessing marijuana and flinging a bong out the window of her apartment. Bynes, who got her start on Nickelodeon’s sketch-comedy show All That at age 10, has been in and out of the tabloids since she was charged with driving under the influence last year. “I’m suing the NYPD for illegally entering my apartment,” the actress tweeted this week, later adding she was also “looking forward to a long and wonderful career as a singer/rapper!”

A home with a history

Canadian artist Shary Boyle has a devoted following in her home country, but in the international art world, she’s still a virtual unknown. That’s about to change. On June 1, the Venice Biennale—the biggest contemporary art event in the world—kicks off, and Boyle will be there as Canada’s official representative. Known for creating fantastical creatures in a do-it-yourself style, Boyle hasn’t said much about the piece she’ll be showing, called Music for Silence, although she’s been working furiously to finish it. “It’s important to me that it’s a surprise,” she says. The world will be watching.