Newsmakers: A jazzy president and a Jay Z bubbly 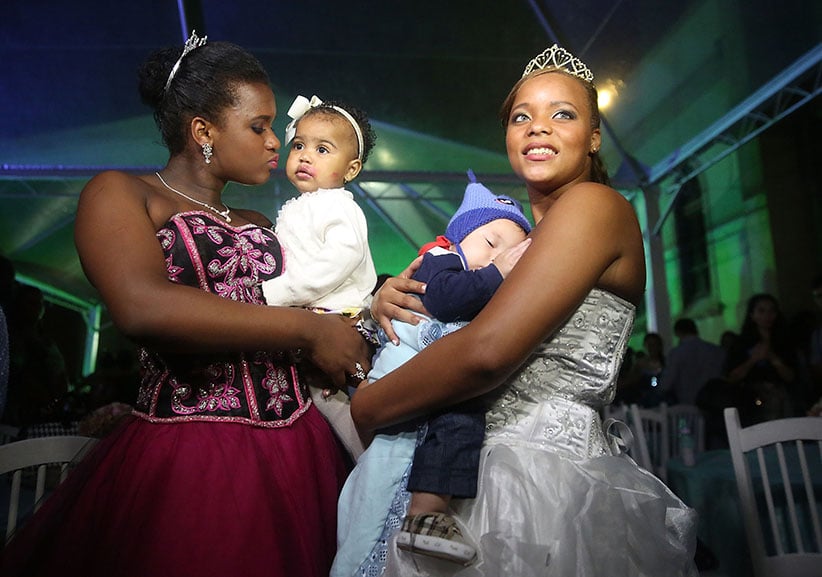 Debutantes: Teens from Rio de Janeiro’s favelas pose with their children before attending a ball meant to create goodwill between residents and police. (Mario Tama/Getty Images)

Bill Clinton
It’s been a long time since the former president played the saxophone on the Arsenio Hall Show, but some people still remember. The Thelonious Monk Institute in Los Angeles gave Clinton an award for making an “essential and valuable contribution to jazz,” both through his advocacy of the music and his keen sax playing. Herbie Hancock, chairman of the Institute, introduced Clinton as “one of my personal heroes,” due to his support of jazz-education programs.

Brianne Jenner
Huge goals are nothing new to this hockey star. Nine months after notching the goal that kickstarted Canada’s come-from-behind overtime victory for the gold medal in Sochi, Canada’s comeback queen scored the only goal of the shootout on Saturday, in Canada’s 3-2 defeat of the U.S. at the Four Nations Cup in Kamloops, B.C. “It’s always extremely intense,” said the 23-year-old native of Oakville, Ont. “We take every game against them really seriously. They’re our rivals and we don’t want to drop a game to them. To see it go to shootout doesn’t surprise me.” Jenner will return to Cornell, where she hopes to inject the struggling Big Red—who have lost all four games they’ve played this season—with some of that magic.

Jay Z
Music stars throw lots of parties, so why not cut out the middle man and own your own champagne? That’s what Jay Z, hip-hop star and Beyoncé spouse, did when he bought the expensive champagne brand Armand de Brignac. It wasn’t always his favourite; Jay Z wrote that he used to buy Cristal until an executive made a disparaging remark about champagne-drinking rappers. Ever since then, he’s been promoting the lesser-known de Brignac, even featuring its gold bottles in one of his music videos.

Sheila Copps
The former Ontario MPP and Liberal MP known for calling out sexism on Parliament Hill decades ago has came forward to share that she was sexually assaulted by a fellow member of the Ontario legislature in the 1980s—while attending a daylong session in northern Ontario on violence against women, no less. Copps also disclosed she was raped by someone she knew 30 years ago; when she went to police, they told her “conviction was impossible.”

‘The Neighbour’
After police in Philadephia put out an alert for a bank-robbery suspect, a customer of Realflesh Masks, a firm in Saint-Hubert, Que., that makes high-quality masks, tipped owner Ian Marier that the photo looked like one of his creations. Marier realized it was a $1,500 model called “the Neighbour,” and he’d just customized one for a client in Philadelphia. After Marier passed the information to authorities, Dion Jordan was arrested. Marier’s mask was so realistic, it allegedly transformed the 35-year-old black man into a middle-aged white man.