Which members of the wild kingdom made global headlines this year?

By By Jacob Sheen and Patricia Treble December 21, 2014 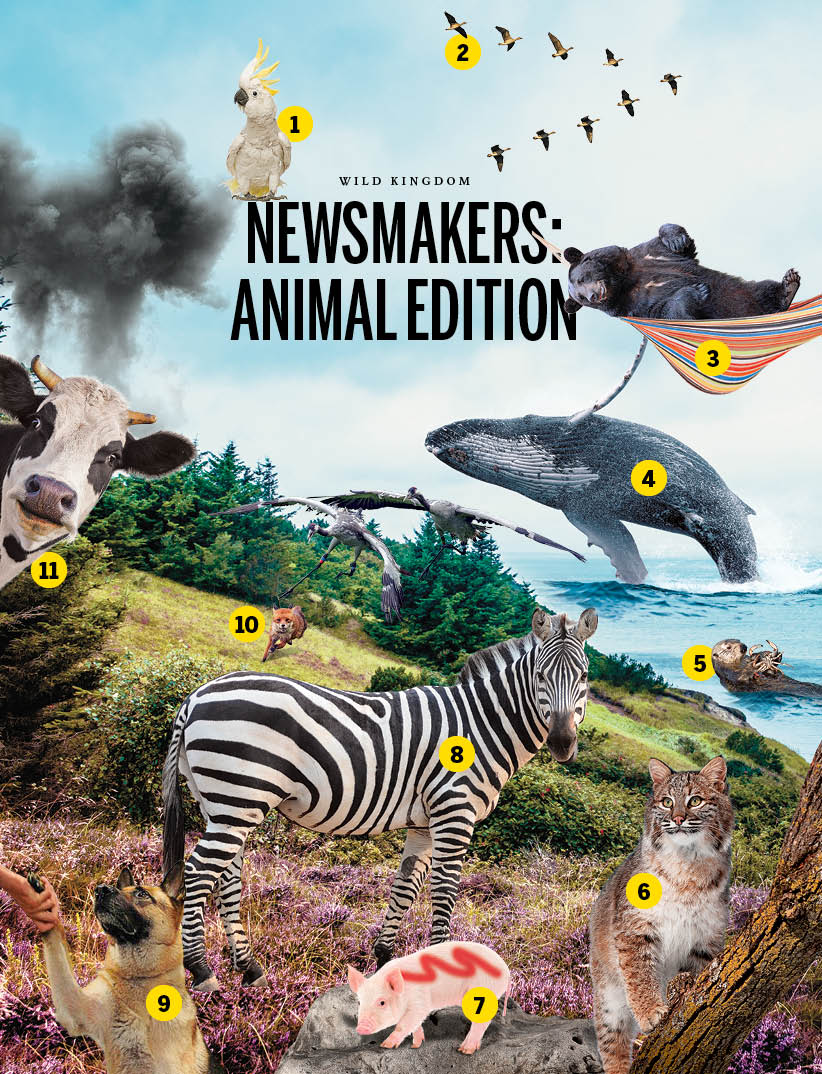 1. BY THE NUMBERS: Fred, an Australian cockatoo, celebrated his 100th birthday with a seed-and-nut cake and, as is customary, a letter from the Queen.

2. ARRIVALS: New research found birds not only use the flying V formation to conserve energy, but also flap in orchestrated patterns to maximize efficiency.

3. FOUND: A Florida bear hit upon a bed that was neither too hard nor too soft, taking a nap in a backyard hammock in Daytona Beach, Fla.

4. BREAKUP: A pod of 30 curious humpback whales gave up playing around a tour boat off Prince Rupert, B.C., when their new BFFs wouldn’t join them.

5. EXIT: An eye for an eye makes the whole world blind, but who can blame this crab, who pincered his way out of the jaws of a sea otter in Norway?

6. ROGUE: For a third time this year, Rocky, a 38-lb. pet bobcat, escaped from his owner and terrorized neighbours near his New Jersey home.

7. FASHION: A sow and her piglets sported a new look, but not by choice: Hoodlums broke into a Maryland petting zoo and sprayed them with animal-friendly paints.

8. WINNERS: Long-distance champs: It turns out, zebras make the longest land migration in Africa each year, a 500-km round trip from Botswana to Namibia.

9. HERO: After seven years of service and with 60 arrests under his collar, Duke, a York Regional Police dog, handed in his badge and gun and retired.

10. FACEOFF: These two cranes, standing guard over their two chicks, chased off a marauding fox in Britain. Helicopter parenting at its best.

11. FLAME-OUTS: One cow was treated for burns after a shed housing 90 particularly flatulent German dairy cows blew up due to a buildup of methane.

A previously published version of this post referred to 30 humpback whales off the coast of “Port Rupert, B.C.”, which should have been Prince Rupert. This has been changed.