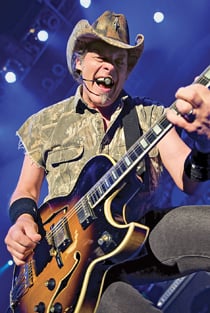 After years of tawdry headlines, tarnished Democratic Party golden boy John Edwards is going to court. The former senator and presidential candidate is accused of diverting $900,000 in contributions to his 2008 presidential campaign to cover up an affair with videographer Rielle Hunter, as well as the birth of their child. Edwards, whose wife, Elizabeth, died of cancer in 2010, contends that the funds weren’t campaign contributions; rather, the lawyers for the North Carolina politician say, the money was a gift from friends to help him out in his time of need. If convicted, he faces up to 30 years in prison and $1.5 million in fines.

After having a go at astrophysics, academia and the world of high tech, Cheick Modibo Diarra has moved on to something far more complicated: governing an African nation. Between 1989 and 2002, the Mali-born Diarra oversaw unmanned NASA missions to Mars, Venus, Jupiter and the sun. He then became president of one African university and co-founded another, before becoming head of Microsoft Africa in 2006. After launching a political party last year, Diarra was recently appointed interim prime minister of Mali following a coup d’état. His first challenge: quelling rebel uprisings in the country’s north. Getting a spacecraft to Mars may be simpler by comparison.

It’s a feat that rivals even this year’s overtime-addled NHL playoffs. For five hours, the Stratford Aces and the Chatham Outlaws battled it out in Ontario’s Atom A tournament. The teams, made up of nine- and 10-year-old girls, played 12 overtime periods before the coaches decided to settle things with a shootout. The winning goal, a flick over the goalie by Stratford’s Emily McFadden, was greeted by the exhausted cheers of parents from both sides.

The sheriff ‘likes’ this

Proving once again that the Internet makes you stupid—or at least lets you broadcast your stupidity to the world—Michael Baker was arrested after he posted a picture of himself on Facebook siphoning gas from a cruiser belonging to the Jenkins, Ky., police force. Hardly contrite, Baker was irked that police made him remove the picture, which shows him brandishing a jerry can and an extended middle finger. “It was funny as hell tho,” Baker wrote on his Facebook page after getting out of jail.

Sarah Silverman has found yet another thing to make shocking comments about: her own body. The comic, known for her potty-mouthed rants on subjects like abortion and gay marriage, was talking at the Tribeca Film Festival about doffing her clothes for Canadian director and indie darling Sarah Polley’s Take This Waltz. Silverman was typically harsh about being naked in front of the camera. “The morning leading up to it, I overgroomed,” Silverman told journalists of the experience. “It was bad.”

Following in the combative (and Progressive Conservative) footsteps of former Newfoundland premier Danny Williams, St. John’s Mayor Dennis O’Keefe has taken to publicly slagging Stephen Harper. O’Keefe, a lifelong Tory, was responding to the recent Conservative budget, which he said drastically reduced the federal government’s presence in Newfoundland and Labrador. As mayor of St. John’s since 2008, O’Keefe says he’s seen federal jobs disappear and decision making exported to Ottawa. Williams, who launched the “Anything But Conservative” campaign in 2008, was no doubt proud as punch.

News that Lindsay Lohan is set to make her return to the silver screen is being greeted with harsh words—and considerable concern for the troubled star. “She’s not in a place to work,” talk show host Rosie O’Donnell told the Today show this week. “She needs a lot of time away. I feel very sorry for her.” Lohan, who made news this week for allegedly starting a bar fight in West Hollywood (her second in two weeks, if TMZ can be believed), is set to play Elizabeth Taylor in the upcoming biopic Liz & Dick, about the icon’s rocky relationship with actor Richard Burton. Extra precautions appear to be in place: “Lindsay Lohan may be the most insured actress that ever walked on a soundstage,” said producer Larry Thompson, admitting he is also moving filming from Canada to Lohan’s L.A. hometown, to “minimize some of the risk.”

No threats are idle

Ted Nugent’s maw got him into trouble yet again when the musician and staunch gun rights advocate waxed wise about the spectre of a second term for the U.S. President. “If Barack Obama becomes the president in November again, I will either be dead or in jail this time next year,” he told an audience of National Rifle Association members in St. Louis. His cryptic bons mots earned him a visit from the Secret Service. The Fort Knox army base has since cancelled his appearance at a June 23 concert.

After nearly three months, many smashed windows and ever more heated rhetoric, it seems Quebec’s striking students will meet with Quebec Education Minister Line Beauchamp. Student groups have taken to the street in protest of the government’s proposed tuition increases, resulting in property damage, bridge closures and hundreds of arrests. Beauchamp has seen it first-hand: her offices have been vadalized and protesters have visited her home. The minister said she would only meet with those student groups that denounced these violent outbursts—which CLASSE, the largest and most radical, only did recently.

In life, artist Thomas Kinkade both delighted and offended with his vivid (and some would say schmaltzy) depictions of godly Americana. His passing earlier this month has been decidedly messier. After the 54-year-old died of apparent natural causes in the company of live-in girlfriend Amy Pinto-Walsh, Kinkade’s wife, Nanette , filed a restraining order preventing Pinto-Walsh from discussing Kinkade, his family or his business interests in a manner that may cause them “to appear in a negative light or false light.” Of particular concern for Kinkade’s estate are details like paint choices and the use of computer enhancement.

No one questions Alison Levine’s toughness. The 21-year-old plays a sport once known as “murderball,” a caustic combination of rugby and basketball played in a wheelchair; athletes bash one another as they attempt to score by rolling through the opposing team’s goal. Levine has played wheelchair rugby, as the sport is officially known, since a neuromuscular disorder limited her mobility. She is one of the sport’s standouts, and is participating in the Canadian wheelchair rugby championships in her native Montreal later this week. Playing the game allows her “to cream someone and knock them out of their chairs,” Levine told the Montreal Gazette. “It’s like you forget; it’s like a level playing field.”

U.S. House Majority Leader Eric Cantor typically aims his ire at Democratic targets like President Obama. But he recently donated upwards of $100,000 to the political action committee of Illinois Republican Adam Kinzinger, who went on to defeat veteran GOP congressman Don Manzullo in a primary battle for this fall’s election. Cantor wouldn’t admit as much, but Washington insiders say he was stung several years ago when Manzullo allegedly said Cantor, a devout Jew, wouldn’t be “saved.” Manzullo has since called for Cantor’s resignation, saying the House leader shouldn’t take sides in a Republican primary—especially against another Republican.

While the world heaps shame on Syrian dictator Bashar al-Assad for killing thousands of his own citizens, two women chose another target: Assad’s wife, Asma. Sheila Lyall Grant and Huberta von Voss-Wittig, the wives of British and German ambassadors, produced a video urging Asma to stop her husband and “fight for peace.” It uses her own words against her: prior to the Syrian uprising last year, the Western-educated Asma portrayed herself as a human rights advocate. “We should all be able to live in peace, stability and with our dignities,” Asma said at a conference. “Asma, when you kiss your own children goodnight, another mother will find the place next to her empty,” a voice-over says on the video, posted to YouTube. “These children could be your children. They are your children.”

Facing 60 years on the throne

A massive portrait of Queen Elizabeth II was projected onto Buckingham Palace this week. The giant image was actually a montage, made from portraits drawn by some 200,000 children; it celebrates Britain’s children in the lead-up to the Queen’s Diamond Jubilee this spring.