Aug. 30-Sept. 6, 2012: A Paralympic scandal, what Paris Hilton will do to earn $1 million, and Elisha Cuthbert’s act of ultimate fandom 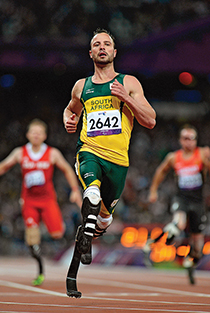 South African double amputee Oscar Pistorius has issued a half-hearted apology to Brazilian Paralympic runner Alan Fonteles Oliveira, who beat him Sunday in the 200-m final at London’s Olympic Stadium. Pistorius, who had never before lost a Paralympic race, complained that Oliveira’s carbon-fibre prosthetic limbs were too long, giving him an unfair advantage. His comments seemed particularly insensitive because he’d faced criticism that his own carbon-fibre limbs gave him an advantage in racing able-bodied athletes when he competed earlier in the London Olympics. Pistorius said later he still believes he raised a valid issue, “but I accept that raising those concerns immediately as I stepped off the track was wrong.”

This hurts me more than them

Bob Fawcett wore a frozen smile, a mismatched brown suit and did his best to avoid angry protesters as he pleaded guilty in a North Vancouver court to causing unnecessary pain and suffering in the killing of 56 sled dogs. The former manager of a sled-dog touring company based in Whistler, B.C., said little during the court appearance, in a case that made him an international pariah and generated outraged headlines around the world. Judge Steven Merrick ordered a psychological report on Fawcett, who has claimed to suffer post-traumatic stress after killing the dogs with guns and knives and dumping them in a mass grave to cull the pack. He faces up to five years in prison and a $75,000 fine when he is sentenced Nov. 22. Crown spokesman Neil MacKenzie wouldn’t say what sentence prosecutors will ask for, but that it will reflect the seriousness of the offence and “the circumstances of the offender.”

I inherited millions, why can’t you

Gina Rinehart, the world’s richest woman, isn’t getting much love after telling fellow Australians to “spend less time drinking, or smoking and socializing, and more time working.” Critics note Rinehart built her $20-billion-plus mining fortune on a $75-million family inheritance, so the pull-up-yer-socks sermon and her calls for tax breaks and a cut in the minimum wage are a bit rich. Still, she has triggered an interesting debate. Paul Williams, a lecturer at Griffith University, writing in Brisbane’s Courier Mail, notes Aussies are “among the world’s top guzzlers,” and they have 78 hours a week of leisure time. “Compare that with one study that found Canadians enjoy just 28 leisure hours per week. Perhaps we should use some of the 19 hours we spend online each week updating our skills and qualifications.”

They studied Congress too well

An Introduction to Congress course has triggered one of the most widespread academic misconduct investigations in the history of Harvard University. Almost half of 279 students enrolled in the course are under investigation by the school’s disciplinary board for allegedly plagiarizing answers or collaborating on the take-home final exam, the Harvard Crimson reports. Jay Harris, dean of undergraduate education, called the case “unprecedented in anyone’s living memory.” He said he hoped the school can use the event “as a teaching opportunity.” Some 20 students may not be getting that lesson; they’re defending their actions to media, saying the prof condoned skipping class and collaborating on assignments.

Only the lobsters were unhappy

There are fans of the Toronto Maple Leafs, and then there is Canadian actress Elisha Cuthbert, whose commitment is such that she will marry team captain Dion Phaneuf. The rare bit of hockey good news—in a month when players and owners lurch toward a potential lockout—was announced by the couple during a joyous dinner with family and friends at the New Glasgow Lobster Suppers restaurant in Prince Edward Island. The two have dated since 2008. Back then, Phaneuf was with the hard-luck Calgary Flames—proof positive Cuthbert’s no bandwagon jumper. Even a previous stint dating hockey lout Sean Avery didn’t cool her ardour for the game. “Happily, happily, happily, happily engaged!” she tweeted. No wedding date was announced, but presumably it’ll be before the Leafs win the Cup.

Paris, we underestimated you

It takes a certain kind of genius to earn $1 million for two days’ work—the fee that socialite and itinerant thespian Paris Hilton extracted for appearing in a music video with Korean pop star Kim Jang-hoon. For this she was required to don a bathing suit and heels and walk along California’s Malibu beach. A beach, in heels. That probably explains the fee. Apparently Hilton’s star power in Korea is such that she tested better than such potential rivals for the gig as Jessica Alba and Scarlett Johansson. Hilton says she has plans to open a hotel chain, like great-grandfather Conrad Hilton. “I’m always working on building my brand,” she said.

When in trouble, punt

Maybe they talk like that in the Lingerie Football League, but Krista Ford’s Twitter advice on female decorum, dress and the value of packing a prohibited weapon proved to be an epic fumble. The former captain of the under-dressed Toronto team, and niece of Toronto Mayor Rob Ford, issued an apology for advising women that the way to avoid sexual assault was to: “Stay alert, walk tall, carry mace, take self-defence classes & don’t dress like a whore.” Outrage, and suggestions of hypocrisy, ensued. Ford quickly tweeted her regrets: “I just want women to be safe.”

He’s a popular Dutch royal who renounced any claim to the throne when he married commoner Mabel Wisse Smit in 2004. Now Prince Johan Friso, 43, has triggered another national debate as he lies unresponsive in an English hospital. He’s been in a coma for six months after he was buried in an avalanche while skiing in Austria. Now there are suggestions he should return to the Netherlands, which has liberal euthanasia laws, and be allowed to die. Heleen Dupuis, chairwoman of the Dutch care organization for disabled people and an MP, raised the issue. “Had the prince been sent to a Dutch hospital, doctors would probably have turned off the life support systems because there is such a slim possibility that he will ever recover.” Princess Mabel has reduced her duties to care for her husband and two small kids.

Don’t ask her to rhyme with ‘Mitt’

Here’s an endorsement Mitt Romney never saw coming. Rapper Nicki Minaj gave a very sweary shout-out to the Republican presidential candidate on a mixtape released this week by Lil Wayne. Or maybe she was desperate to rhyme something, anything, with economy. “I’m a Republican voting for Mitt Romney / You lazy bitches is f–king up the economy / Out in Miami I be chillin’ with a zombie.” Either way, it’s unlikely to catch on with Romney’s core support.

New York priest Benedict Groeschel spent decades counselling wayward Catholic priests. Now the work of the 79-year-old founder of the Franciscan Friars of the Renewal is called into question by comments about sexual abuse he made in an interview with the National Catholic Register. “Suppose you have a man having a nervous breakdown, and a youngster comes after him,” Groeschel said. “A lot of the cases, the youngster—14, 16, 18—is the seducer.” The story was yanked from the paper’s website after a report by the New York Times. Editor Jeanette De Melo apologized: “Child sexual abuse is never excusable.” A statement by the Franciscans said Benedict was hit by a car seven years ago and spent weeks in a coma. His health and cognitive abilities are failing. “Although these factors do not excuse his comments, they help us understand how such a compassionate man could have said something so wrong, so insensitive and so out of character.”

The sweet smell of whale puke

Eight-year-old Charlie Naysmith’s visit to Hengistbury Head on the southern coast of England has proved very profitable. He scooped up a solidified piece of whale excrement that may be worth tens of thousands of dollars, the Bournemouth Echo reports. The 600-g chunk of ambergris, as it’s known, is used as an expensive perfume ingredient, and is valued in some cultures as an aphrodisiac. Charlie just wants to use the proceeds of any sale to build a house for animals. The waxy substance builds up in sperm whales to ease the passage of hard bits of food waste. Ambergris merited a chapter in Herman Melville’s classic Moby-Dick: “Who would think, then, that such fine ladies and gentlemen should regale themselves with an essence found in the inglorious bowels of a sick whale!”

A black belt in rhetoric

Russian President Vladimir Putin launched the school year at Moscow’s High School No. 1519 with an “Olympic lesson.” Russia had mixed success at the London Games, but it excelled in his favourite sport, judo. “We even did better than Japan, the mother country of judo,” he told an assembly.