Newsmakers: Chris Hadfield on TV and Hitchbot in Victoria 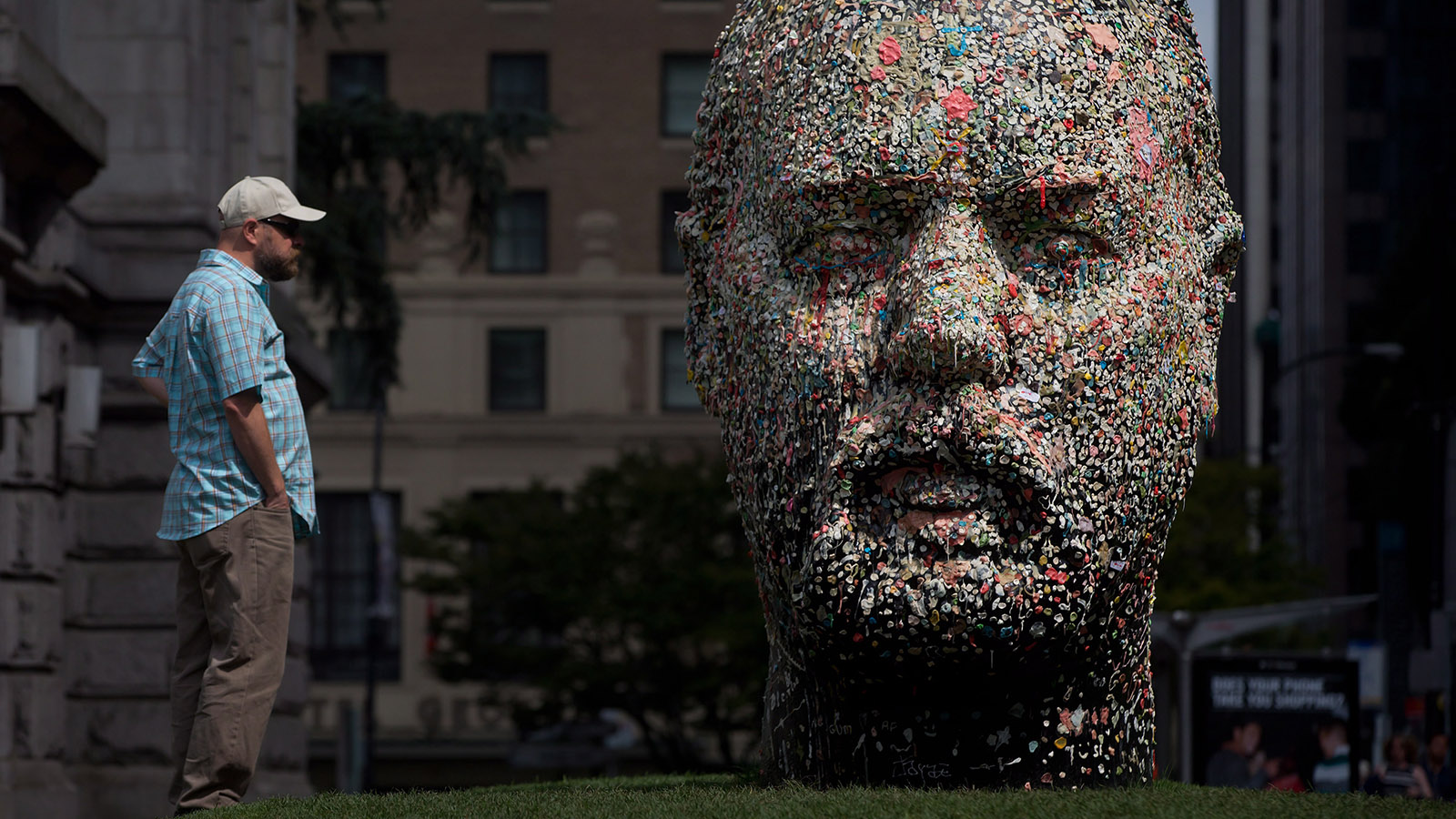 A man stops to look at Douglas Coupland’s “Gumhead” sculpture in Vancouver, B.C., on Tuesday August 19, 2014. The seven-foot sculpture is a likeness of the artist and has been outside the Vancouver Art Gallery all summer. People have been encouraged to apply their chewed gum to it so it would transform and eventually obscure the artist’s face. (Darryl Dyck/CP)

The Canadian astronaut has been a social media darling, a literary star and commander of the International Space Station. Now he’s branching out to the world of television: his bestselling book, An Astronaut’s Guide to Life On Earth, will be adapted for the small screen by ABC. The comedy, which has yet to be cast, will look at what it’s like for an astronaut returning to Earth and domestic life after a high-profile space mission; gravity, apparently, will be the least of his concerns.

The phenom pitcher from Philadelphia has it all, from a dynamic arm to remarkable poise on the mound—but it’s her gender that made the 13-year-old the talk of the Little League World Series. Just the 18th female player to ever appear in the 68-year-old tournament, she captured hearts and the cover of Sports Illustrated with a complete-game shutout over Nashville, the first one ever hurled by a girl. Davis wasn’t able to follow that up with another win, sending her team to elimination at the hands of Las Vegas. Still, the issues she raised will outlive her Little League legacy as she pursues a new “dream” career: basketball.

As the death toll from Ebola in West Africa soars past 1,400, two American aid workers have been declared cured. Brantly and Writebol were infected while working in Liberia, then airlifted to an Atlanta hospital, treated with an experimental drug called ZMapp and released into the arms of grateful friends and family, with the U.S. Centers for Disease Control and Prevention confirming the pair “no longer have Ebola virus in their blood.” Brantly called it a “miraculous day,” as the World Health Organization drew up a road map to combat Ebola over the next nine months.

After a period of will-he-or-won’t-he conjecture—and just one year on the job—the most powerful man in Canadian sports announced this would be his final year as the CEO of Maple Leaf Sports Entertainment, which owns the Toronto Maple Leafs, the Toronto Raptors and the Toronto FC. Leiweke talked a big game—promising to bring a championship mentality to a market that deserved better—and he largely delivered, re-energizing the city’s basketball and soccer teams, and making bold hires for the Leafs. “It’s time for me to begin the transition from sports and entertainment executive to entrepreneur,” Leiweke said.

Armed with little more than two pool-noodle arms and a computer with speech-recognition software and GPS, the hitchhiking robot completed its mission to travel 6,000 km from Halifax to Victoria. The month-long project, a collaboration of professors at Ryerson and McMaster universities, was designed to test the kindness of strangers. “Usually, we have robots help us. In this case, this robot is absolutely dependent on people’s help,” said Hitchbot co-creator Frauke Zeller. I think we had some very amazing results.”