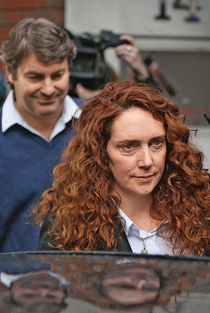 Yes, Virginia, there is a Santa

Mega-investor Warren Buffett has seen the future, and it’s written on newsprint. The latest gift to a beleaguered industry by the billionaire chair of Berkshire Hathaway is a deal to buy for US$142 million some 63 papers owned by Virginia-based Media General Inc. This includes the flagship Richmond Times-Dispatch, and—no fool, he—all websites, mobile and tablet applications. His investment company already owns stakes in the Washington Post and the Buffalo News, and it recently purchased Buffett’s hometown paper in Omaha. “In towns and cities where there is a strong sense of community, there is no more important institution than the local paper,” Buffett said.

Two Facebook executives updated their profiles last week. One day after the social-networking giant went public on NASDAQ, founder Mark Zuckerberg, 28, married his long-time girlfriend, Priscilla Chan, 27, in their modest, Palo Alto, Calif., backyard. The couple, who served the mouse-shaped chocolate truffles they ate on their first date for dessert, kept the nuptials secret by claiming the party was to celebrate Chan’s recent graduation from medical school. Zuckerberg’s updated Facebook status—used, of course, to announce the wedding—received almost one million “likes.” No such luck for Eduardo Saverin, Facebook’s original CFO, who earned nothing but scorn after announcing one day before the IPO that he’d renounced his American citizenship to live in low-tax Singapore. U.S. senators compared Saverin to a terrorist and have proposed an “Ex-Patriot Act” to confiscate the earnings of tax exiles. “Our plan is simple,” said Sen. Chuck Schumer. “If you renounce your citizenship to avoid paying taxes, you can’t set foot in America again, and any investments you have in America will be taxed in the future at 30 per cent.”

No more flying kicks, no more acrobatics, no more bruising jabs or hook punches for Jackie Chan. “I’m not young anymore. I’m really, really tired,” the veteran martial artist told reporters this week, after announcing his intention to stop fighting on the silver screen. “And the world is too violent right now,” he added. “It’s a dilemma—I like action but I don’t like violence.” His latest picture, Chinese Zodiac, will be his last action picture, he insists. “I have to stop one day,” he said.

All downhill from here

When wheelchair hero Rick Hansen first wheeled up Coquitlam, B.C.’s notorious Thermal Drive hill 25 years ago, the Man in Motion called it the second-toughest physical challenge he faced during his around-the-world journey. Only China’s Great Wall was worse than the 1.6-km incline. Last Friday, older, wiser, but still physically imposing, the 54-year-old father of three faced his nemesis again on the homeward stretch of his 12,000-km, 25th anniversary cross-Canada relay for spinal cord research. He conquered the hill yet again, buoyed by a cheering crowd. It was “big time” tougher than in his youth, he conceded. It starts easy and keeps getting worse: “It’s the most deceptive hill in the world.” With the hard part behind him, he looked forward to Tuesday night’s gala celebration at Vancouver’s Pacific Coliseum, including performances by Sarah McLachlan and David Foster.

There was great speculation about whether Allan Fotheringham would show up to the nod of Queen Elizabeth II to accept her offer of a Diamond Jubilee Medal for his gifts to journalism. Especially since he spent much of his 50 years as a Canadian columnist (27 of those years on the back page of Maclean’s) railing against what he saw as the ludicrous situation of having his juvenile country accepting that its head of state lived across an ocean. As it happened, Dr. Foth showed up, as ordered, at the Toronto Lawn Tennis Club to be pinned with a heavy breast medal, along with 23 other Ontario recipients. The fellow doing the pinning was Sen. Art Eggleton, who nominated Foth in the first place—and was present, three nights later, at a hilarious party for 30 friends of the shy host, all of whom giggled at the connection between the rude colonial and the Queen who must have read his column each week.

A tale fit for Hollywood

You would think after all the trouble it brought Conrad Black, removing boxes would be the last thing an embattled newspaper executive would do. Apparently no one mentioned this to Rebekah Brooks. The former News of the World editor and Rupert Murdoch lieutenant was charged with perverting the course of justice. Among other things, Brooks, along with her personal assistant, stands accused of conspiring to sneak boxes out of the News International archives. (Her husband, Charlie Brooks, and three others were also listed on the charge sheet.) Brooks is the highest-profile figure charged in the ongoing phone hacking scandal. She calls the accusations “weak and unjust.” At the Cannes film festival, Gene Kirkwood, the producer behind Rocky and the 50 Cent biopic Get Rich or Die Tryin’, announced plans to make a movie of Brooks’s life.

The survivors of the Srebrenica massacre in Bosnia have waited almost 17 years to see justice done. They will have to wait a little longer still. Former Bosnian Serb general Ratko Mladic’s war crimes trial in The Hague was barely under way when the judges overseeing it announced an indefinite delay. The prosecution had failed to turn over thousands of pages of evidence to Mladic’s defence team. His lawyers are now demanding months to sift through the pile. Mladic is accused of overseeing the slaughter of 8,000 men and boys in Srebrenica in 1995, as well the 44-month siege of Sarajevo, and a years-long campaign of ethnic cleansing in Bosnia and Croatia. On the first day of his trial, Mladic waved and gave a throat-cutting gesture to the courthouse gallery, which was filled with survivors from the war.

Clothes off, the show’s on

It’s safe to say that the one thing the owners of Paris’s famed Crazy Horse cabaret didn’t give its striking strippers were the shirts off their backs, because, well, why ruin a good thing? Last week the theatre was forced, for the first time since its 1951 opening, to cancel its large-scale, high-brow nudie revue. “Being nude every night is not an easy thing from either a moral or physical point of view,” said Suzanne Durand, the dancers’ union representative. Management quickly caved to the demands of the 18 dancers, giving them both a raise and better recognition of their hard work, one of the owners, Philippe L’homme, told the Sydney Morning Herald. The dancers had netted about 2,000 euros a month for five or six nights of work a week, Durand said. “To be paid this salary makes it seem vulgar.” With the raise, the salary will be 15 per cent less vulgar.

Romania’s education minister resigned after academics on three continents accused him of plagiarism. Ioan Mang, a computer scientist by trade, had been in the job barely a week when he quit. His predecessor, Corina Dumitrescu, was forced to step down after she, too, was accused of copying other people’s work. Mang says the accusations of plagiarism—academics claim at least eight of his papers were lifted, almost in their entirety—were politically motivated. He hasn’t explained why exactly researchers in Japan, Taiwan and Israel would be interested in sinking his political career.

In the wake of Barack Obama’s announcement of support for same-sex marriage, other famous people are weighing in. Actor Will Smith and rappers Jay-Z and 50 Cent support the U.S. President. Champion boxer Manny Pacquiao remains opposed. But after it was erroneously reported that Pacquiao had invoked a Bible passage to suggest homosexuals should be put to death, the Philippine boxer and legislator was forced to clarify his views. “I’m not against the gay people. What I said is: ‘I’m not in favour of same-sex marriage,’ ” he told the Associated Press. “My favourite verse in the Bible is ‘Love one another,’ and ‘Love your neighbour as you love yourself.’ It’s in the Bible: do not judge. I’m not judging.”

He took a shine to it

Richard Mackenzie Matthews is alleged to have walked into a Windsor, Ont., jewellery store two weeks ago and attempted to switch one of the store’s diamonds with a fake he’d brought with him. Quick thinking by staff kept Matthews from getting away, but the 1.7-carat diamond was not immediately recovered—because Matthews allegedly swallowed it. “We just kind of have to wait and let nature take its course,” Staff Sgt. Tammy Fryer told the Windsor Star. “Not nice for the guy who has to search it.” Matthews managed to pass one stone last Friday, but it was a fake, not the $20,000 gem. The real diamond emerged a day later.

The prince still has game

Prince Charles plunged into a ball hockey game in Saint John, N.B., and emerged with a goal and royal bragging rights—his son William went scoreless during his hockey match in 2011.