Ben Mulroney has a big audition, Dominique Strauss-Kahn’s in trouble, again, and Justin Bieber gets in the ring 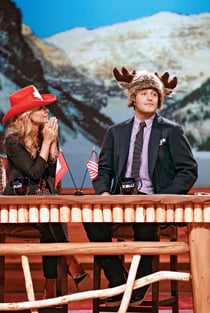 Still punching above his weight

Somehow, with little consequence except the continued appreciation of British children, the puppet Mr. Punch has managed to commit domestic abuse, infanticide and other slapstick crimes for 350 years now. On May 9, 1662, the diary of Samuel Pepys, notes that he witnessed at London’s Covent Garden piazza what he described as “an Italian puppet play . . . which is very pretty, the best that ever I saw.” With his red nose and squawks, produced by a “swazzle” sound-making device played by a “professor”—the puppeteer inside the booth—the anarchic Punch still enthralls, a disturbing testament to the comic power of senseless violence.

Tragedy of a ruined bruin

Captured mid-fall in a stunning snapshot by student photographer Andy Duann, a 280-lb.black bear tranquilized after stealing into a tree at the University of Colorado campus in Boulder became an instant celebrity last month. Not two weeks later the bear was dead, struck by two cars near the university. Authorities had hauled the slumbering animal to the mountains, but the wilds of Colorado are dry this spring and the bear was on his way back to campus when he was struck.

Live! With Ben and Kelly?

In Canada he’s known as a scion of the Progressive Conservatives’ last majority PM, who once famously crooned When Irish Eyes are Smiling alongside President Ronald Reagan. South of the border Ben Mulroney, host of CTV’s eTalk, may soon be known as the successor to another professional Irishman, Regis Philbin, whose retirement from TV last year left former co-host Kelly Ripa flying solo on the morning show they helmed for years. After a guest spot co-hosting Live! With Kelly in Banff, Alta., in April, Mulroney last week travelled to New York for what appeared to be an audition for a more permanent spot. During his appearance Mulroney pulled out every Canadianism in the book, dropping Canuckish lingo like “poutine” and “chinook” and wearing some sort of moose-antler headdress.

A rough Dimon polishes up

The Occupy Wall Street movement has received an unlikely nod from Wall Street. Jamie Dimon, the outspoken, free-market-leaning CEO of investment bank JPMorgan Chase & Co., recently acknowledged the protesters have some “legitimate complaints,” although he didn’t exactly apologize for the money that investment bankers earn. Still, it was an unexpected fig leaf from a man who last year traded barbs with Bank of Canada governor Mark Carney over his calls for better bank regulation in order to avoid a repeat of the financial crisis. “It was everyone guilty. That’s another form of discrimination,” he said. “When things go wrong, finance gets blamed.”

Male parakeets are known for their mimicry, but rarely do they say anything useful. Not so for the budgie Piko-chan, that Fumie Takahashi, of Yokohama, Japan, taught to recite its home address—a neat party trick that came in handy after Piko-chan flew out a window last week and ended up on the shoulder of a guest in a downtown hotel. After being captured and turned over to police in a cage, Takahashi’s pet held out for two days before it started talking.

The future of one of the most feared relief pitchers in Major League Baseball, Mariano Rivera, is suddenly in doubt after he tripped during a recent New York Yankees team practice in Kansas City, Mo. Rivera, the team’s unflappable closer, was running down a fly ball when he fell awkwardly near the outfield wall. He was later diagnosed with a torn anterior cruciate ligament. At age 47, the five-time World Series champ had previously hinted this may be his last season, although he no doubt planned to leave the diamond on his own two feet.

It’s been nearly a year since New York prosecutors asked a judge to drop sexual assault charges against Dominque Strauss-Khan, former head of the International Monetary Fund, but that doesn’t mean his sordid problems have also disappeared. A U.S. judge recently ruled that a civil suit by the New York hotel maid in question can go ahead, while authorities in France continue to investigate the one-time French presidential hopeful for his role in a prostitution ring. That investigation, in turn, has unearthed new accusations that DSK sexually assaulted another woman during a sex party in Washington two years ago.

Does Queen Elizabeth II have a sense of humour? Allan Fotheringham, whose writing graced the back page of this magazine for 27 years, has complained forever about the ludicrous situation where the head of state of this juvenile country lives far away across a large ocean. He has pointed out it is not her fault, but the blame of the silly twits in Ottawa who don’t have the courage to correct the goofiness. So the scribe was astonished to find an invitation (order?) from Her Majesty to appear at the Toronto Lawn Tennis Club on May 14 at 6 p.m. to accept, after a small ceremony, the Diamond Jubilee Medal. The order (invitation?) was sent through Art Eggleton, Toronto’s mayor from 1980 to 1991, and now a senator. Insiders are giggling as to whether Dr. Foth has the courage to swallow his pride and show up. Or to stick to his supposed principles.

Given the challenges facing Yahoo!—flat sales and slipping market share—it seems odd that new CEO Scott Thompson, formerly the president of eBay’s PayPal division, would have felt compelled to further pad out his resumé in order to secure the top job. But a major shareholder says Thompson lied on his resumé about having degrees in accounting and computer science, pointing out that the school he attended in Boston didn’t offer a degree in computer science when he graduated. The extraneous degree was removed from Thompson’s bio on Yahoo!’s website last week while the board said it was reviewing the matter.

Among documents uncovered at Osama bin Laden’s secret hideout in Abbottabad, Pakistan, on the night of his assassination last year was a memo al-Qaeda spokesman Adam Gadahn wrote looking at how the terrorist group should handle public relations around the 10-year anniversary of its 9/11 attacks. Gadahn suggested al-Qaeda target select journalists in the West and Middle East, among others naming Canadians Eric Margolis, until 2010 a Toronto Sun writer, and Gwynne Dyer, a syndicated columnist living in the U.K. These journalists could receive “special media material,” Gadahn wrote. Margolis, a longtime observer of the region, wasn’t surprised he was considered, saying: “I’m known for honest, independent reporting.”

Full of elegiac lyrics and titles like Going Home and Amen, Leonard Cohen’s most recent album, Old Ideas, speaks more to nearing the end of the road than heading out on it. But that’s just what he’ll do in support of his new collection of songs this fall: his latest tour will begin in Austin, Texas, in October and end in Brooklyn, N.Y., two months later, with stops throughout Canada and at New York City’s famed Madison Square Garden in between. Cohen is 77 and has had a career with lows as deep as his cigarette-ravaged voice, but a never-ending tour schedule and sold-out dates around the world must be a satisfying high for the Montreal troubadour. So Long, Marianne? Not yet.

Asking her to marry him, Shane Bauer tied a shirt thread around Sarah Shourd’s ring finger, an ad hoc measure made necessary by the fact they were in custody, along with friend Josh Fattal, in Iran. The American trio were hiking in the Iraqi region of Kurdistan in July 2009, when Iranian guards arrested them for supposedly crossing the border. Their imprisonment was a diplomatic nightmare: Shourd was held for 14 months, Bauer and Fattal until fall 2011. The couple married on Saturday at a secret location in California, with Fattal as best man.

It’s been a banner month for Justin Bieber: he graduated from high school by passing his equivalency exam, and, looking very much the adult, accompanied boxing bad boy Floyd Mayweather Jr. to his triumphal showdown with Miguel Cotto in Las Vegas. (Bieber, a boxing fan, jumped into the ring alongside 50 Cent and Lil Wayne after the win carrying two of Mayweather’s title belts.) Yup, Bieber’s growing up: his so-called “swagger coach,” Ryan Good, left his entourage in October—indicating he has nothing left to learn in terms of cool—and his latest music video, for Boyfriend, casts him in a newer, jarringly sexy light, with him whispering guttural sweet nothings. Sniff. They grow up so fast.