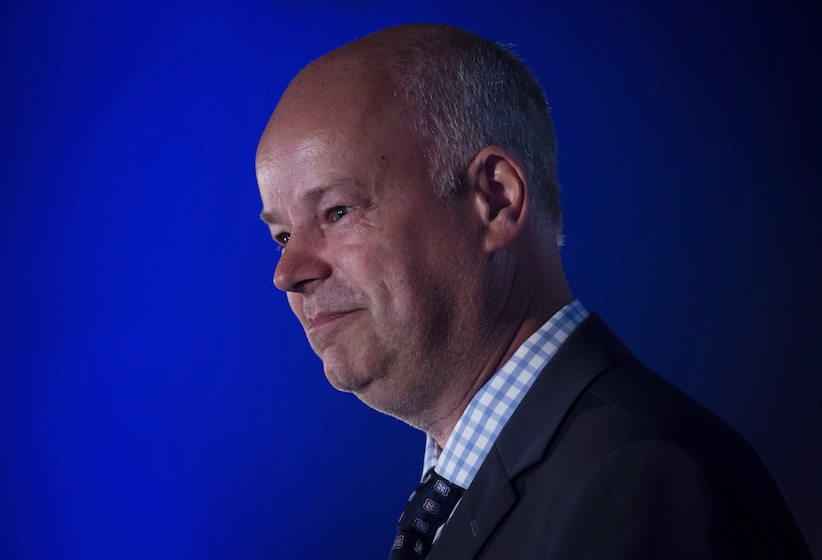 Nova Scotia Conservative Leader Jaime Baillie delivers a speech to supporters at his headquarters in Springhill, N.S. on election night on May 30, 2017. THE CANADIAN PRESS/Darren Calabrese

“As soon as we became aware of those allegations we took immediate steps to address them,” she told reporters at Province House in Halifax. “The PC party of Nova Scotia does not and will not tolerate sexual harassment in the workplace.”

Miller said she is only aware of one individual who has come forward with allegations, but she would not say whether the allegations result from one incident or multiple incidents over time.

“In order to respect the confidentiality and privacy of the individual involved, we’re not going to be sharing any more details than what we’ve already disclosed,” she said.

Miller said the decision to ask Baillie to step down was supported unanimously by the party caucus.

Although caucus members were provided with the “appropriate information” to make a decision, Miller said the investigator’s report has only been disclosed to legal counsel.

“We’re very confident that the individual we retained to do this report did a very thorough and careful analysis of the issue,” she said. “The report concluded there had been a breach of the harassment policy.”

Miller said the scope of the party’s involvement in the harassment allegation has concluded.

A spokeswoman for the Halifax Regional Police said the force has not received a report or complaint against Baillie.

“In order to investigate a sexual assault allegation we would need a complainant, we would require somebody like an individual victim or victims,” said Const. Carol McIsaac. “It wouldn’t be our victim-centered approach to investigating this to go and seek out a victim.”

Baillie surprised the legislature by announcing his resignation on Twitter, saying he wanted to focus on his family and was “resigning for personal reasons.”

“It has been an honour and privilege to lead the PC party for the past seven years,” said Baillie, who became party leader in 2010 after the Tories were ousted from power.

“I am resigning for personal reasons,” he said. “My priority is my family and I ask that our privacy be respected.”

The announcement came nearly three months after Baillie revealed plans to leave the helm of the official Opposition once a new leader was chosen.

Within hours of his tweet, the party issued a statement about the harassment claims, shedding light on why Baillie left so abruptly.

MacFarlane, the MLA for Pictou West, said she was “very disappointed (and) sad.

“It’s a delicate, delicate issue and it’s been a difficult process,” she said. “It’s a lot to digest but as we all know, no one is above the law.”

“It’s difficult to square the finding of sexual harassment with the person that I know, knew, and worked with,” he said. “We’re all trying to reconcile it. It’s shocking. It’s not the Jamie that we know or knew.”

Baillie, a chartered accountant, rebuilt the Progressive Conservatives from a bruised and battered third-place party into a solid Opposition.

“It is strong, it is debt-free and it has the world’s best caucus,” he said last November during a news conference. “We have built a modern, dynamic, truly progressive party that will be a real alternative government for the people of Nova Scotia.”

In recent years, Baillie has made ending sexual violence a key political issue.

In 2016, the opposition Progressive Conservatives tabled a bill calling for free legal representation for some victims of sexual violence.

Baillie said in a statement at the time the bill would enshrine the right of victims to legal representation.

MacFarlane said the party will announce the date of a leadership convention in the coming weeks.