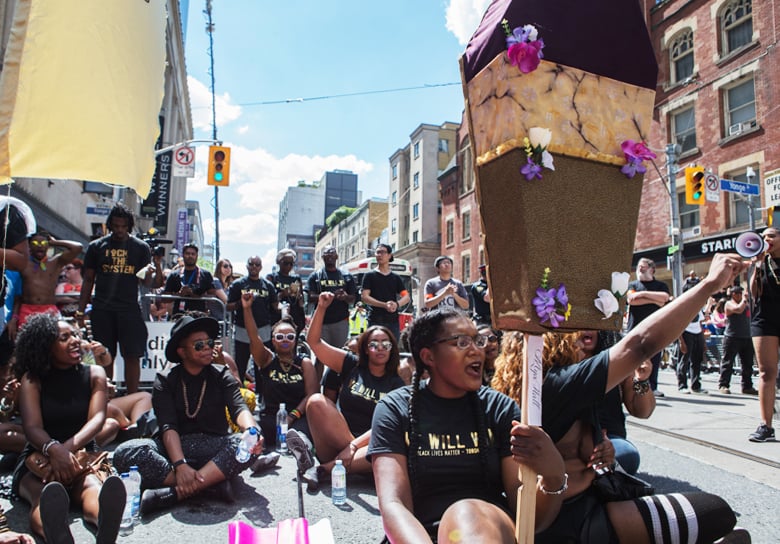 Members of Black Lives Matter Toronto briefly interrupted the Toronto Pride Parade for a short demonstration during the parade on July 3, 2016. JENNIFER ROBERTS FOR MACLEAN’S MAGAZINE

TORONTO — Members of the Toronto police force say they’re offended that Pride organizers agreed to a list of demands set out by Black Lives Matter during Sunday’s parade.

The list includes nine demands that range from banning police floats in future parades to increasing funding for spaces for racialized communities.

Janaya Khan, co-founder of Black Lives Matter Toronto, said the group took the position they were given in the parade as an opportunity to open up a conversation about how to make Pride more inclusive for marginalized groups.

Members of the group held a sit-in part way through the city’s 36th annual Pride Parade, stopping it from moving forward for about a half hour.

It resumed when Pride’s executive director, Mathieu Chantelois, signed the list of demands.

The president for the union representing the city’s police officers said he’s outraged that Pride would accept the demands.

Mike McCormack said that police officers have been supporters of Pride for years, and that it’s “stupid” to try and exclude them.

“This is about the Pride parade, this is not about Black Lives Matter,” he said in an interview Monday.

“We have been supporting this parade for years, long before politicians and other people. To suggest that police should be removed and not have a float or booths or be allowed in the community space, that’s complete and utter nonsense.”

He suggested that Black Lives Matter shouldn’t be allowed to co-opt another group’s event. Khan took issue with that stance.

“I can’t co-opt what is mine,” said Khan, who is part of the LGBTQ community, adding: “It was never community consensus that police floats should be a part of Pride to begin with. There wasn’t town halls that happened.”

And Khan noted that this sort of political action isn’t unprecedented at Pride parades.

But while Pride Toronto’s executive director signed the document during Sunday’s parade, organizers are now saying that they were really just commiting to “having a conversation” about the list.

“There’s a number of (the requests) that are quite reasonable, in terms of how we engage with the black, queer community,” said Alicia Hall, a co-chair of Pride’s board of directors. And the rest of them, she said, will be discussed — including the role of police.

But Khan said that while some of the items on the list are negotiable, the ban on police floats is not.