'I didn't expect any of this,' said Penny Oleksiak, Canada's flag-bearer at the closing ceremonies 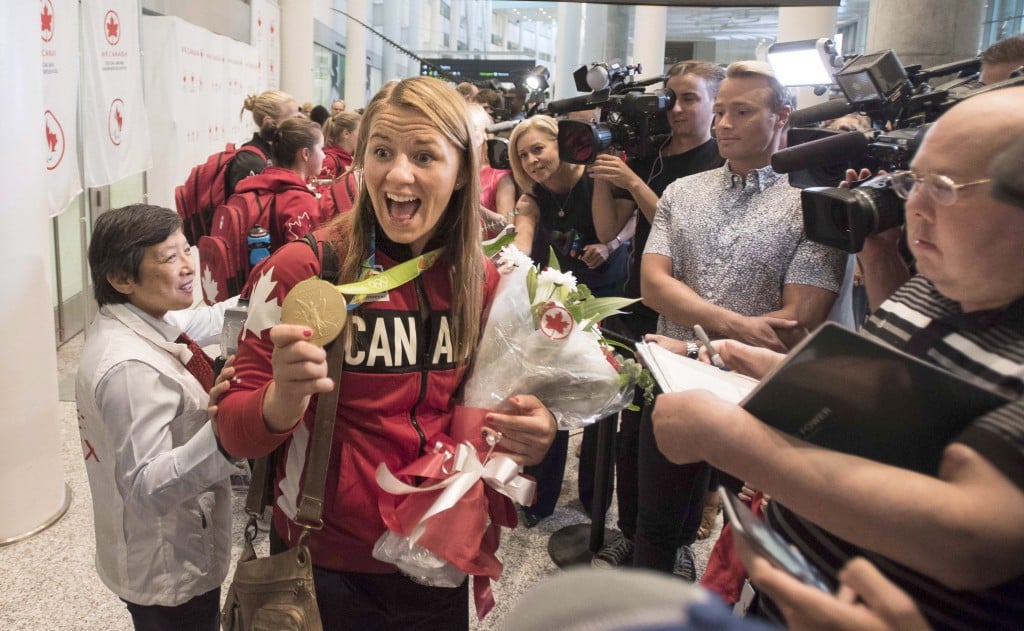 Canadain olympic gold medalist in wrestling Erica Wiebe speaks to media and signs autographs as she is welcomed at the Toronto Pearson Airport in Toronto on Tuesday August 23, 2016. THE CANADIAN PRESS/Aaron Vincent Elkaim

Several members of Team Canada, including star swimmer Penny Oleksiak, landed at Toronto’s Pearson International Airport around 6 a.m., with another group of athletes scheduled to arrive at around the same time early Wednesday.

When the flights arrived, airport firefighters saluted the returning athletes with giant arcs of water on either side of the airplanes.

Loud cheers went up as the Olympians came through the arrivals gate, some stopping to talk to media, others heading straight to waiting family members.

Soccer player Ashley Lawrence’s parents donned Team Canada shirts to welcome their daughter. The pair said they are looking forward to figuring out where to display the midfielder’s bronze medal.

Lawrence’s teammate, Jessie Fleming, said she was proud of their performance.

“We all had a good tournament and we definitely deserved to bring this home,” Fleming said, holding her medal.

Most of the buzz focused on 16-year-old Oleksiak, who won four swimming medals at the Rio Games, including Canada’s first gold.

“I didn’t expect any of this,” said Oleksiak, who was Canada’s flag-bearer at the closing ceremonies. “I just want to say thank you to everyone (who cheered for me).”

Residents in Oleksiak’s east-end Toronto neighbourhood known as The Beach are planning a celebration for her return, tentatively planned for Sunday.

Johanna Carlo, a board member of the Beach Village Business Improvement Area, says the group has applied for a permit to hold a big party for Oleksiak and other athletes who have lived in the neighbourhood. She says they’re planning on having live music, and she’s hoping people will bring home-made signs and wear red and white.

Several of the returning athletes expressed gratitude for the support and encouragement they received from Canadians throughout the Games.

MacLennan, who carried Canada’s flag at Rio’s opening ceremonies, said making time for fans helps get them engaged in the Olympic process.

“It’s a chance to share the experience with the people who supported us along the way,” she said.

Teenage soccer fans Claire and Gillian Kilgour found out about the Olympic homecoming at midnight and got up at 4 a.m. to come to the airport with their father.

Three hours later, the 16-year-old twins were rewarded with an autograph from Kadeisha Buchanan, one of the bronze medal-winning women’s soccer players.

The sisters stress they support the whole team, however.

“We don’t have a favourite player,” Gillian Kilgour said. “We like everybody.”