In an avalanche of bad news, family members of Rio athletes say they are cautious 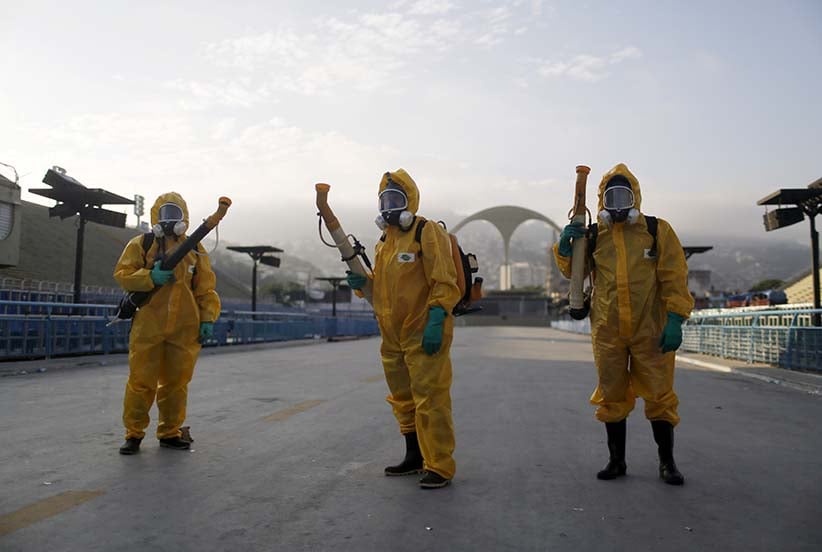 Municipal workers sprayed insecticide around Sambadrome, where the city’s Carnival takes place every year, and where the archery competitions will take place during the Rio Olympics. The operation is part of the city’s effort to prevent the spread of Zika’s vector, the Aedes aegypti mosquito, according to a statement from Municipal Health Secretary. (Pilar Olivares/Reuters)

Outraged over unpaid wages, police officers had gathered at Rio’s airport, greeting passengers with a banner that read “Welcome to hell. Police and firefighters don’t get paid, whoever comes to Rio de Janeiro will not be safe.”

It was just latest in an avalanche of bad news to come out of Rio. From graphic pictures of horribly polluted water, to warnings about the Zika virus, and reports of violent crime and police protests, it’s been tough for Olympic family members to ignore the negative buzz around Brazil’s host city.

But Bishop and his wife Alison wouldn’t be anywhere else but in Joao Havelange Olympic Stadium when their daughter Melissa races for a medal in the 800 metres. They’re cautiously optimistic they’ll be safe.

“You hear about the police not being paid, and think ‘Hmm.’ (The crime) is in the back of your mind,” Doug Bishop said. “But at this point, you don’t want to think about it because you want to support your daughter. You have to look at it and say ‘She’s going, why can’t we go?”‘

On Wednesday, Angelo Que of the Philippines became the 20th golfer to pull out of the Olympics. He cited concerns about the mosquito-borne illness, which has been linked to birth defects in babies.

Hilary Stellingwerff is headed to Rio to race the 1,500 metres in her second Olympic appearance, but won’t stay there any longer than she has to. Stellingwerff and husband Trent — a sport scientist who will be working with the Canadian team in Rio — have a two-year-old son, Theo, who will stay home in Victoria with grandparents.

But the two plan to have more children. So Hilary says she will fly into Rio four days before she races — three rounds, if she makes the final — and fly home the day after.

“I’ve especially been talking to our medical doctor (Paddy McCluskey) who over the last six months has become a real expert on Zika and dengue,” said Trent. “So we know that the transit times, or the residual times of Zika. There’s also a Zika blood test you can get. The major issue with Zika is you can be a carrier and by asymptomic.”

And as Stellingwerff pointed out, Zika isn’t confined to Brazil — a man died of the disease last week in Utah, the first confirmed Zika death in the U.S.

Then there’s the threat of crime, which Mayor Eduardo Paes, in an interview with CNN last week, called “the most serious issue in Rio and the state is doing a terrible, horrible job.

“It’s completely failing at its work of policing and taking care of people.”

Among recent ominous events: Australian Paralympic sailor Liesl Tesch was robbed at gunpoint in Rio when she was out on a bike ride. The robbers knocked her to the ground and took her bike. Earlier this month, a couple dozen armed men stormed a Rio hospital to free a suspected drug trafficker.

Thieves hijacked a German TV broadcast truck at gunpoint and made off with more than $US400,000 worth of equipment.

The police protests came amid slashed budgets, a product of Brazil’s worst recession in decades.

But Sports Minister Leonardo Picciani said Tuesday the government is granting the armed forces an additional US$24 million for security. The military will begin patrolling sports venues July 24, and some 85,000 police and soldiers are to be deployed during the Games — roughly double the number of security at the 2012 London Olympics.

Still, some athletes are taking special precautions to keep their loved ones safe. American swim star Michael Phelps is paying for a private security company to protect his family, while other U.S. families were looking into booking armoured vehicles, according to a New York Times report.

“Maybe we’re naive,” said Lynn Lalonde, mom of Genevieve, who made the Rio team in the 3,000-metre steeplechase.

Gathered at Edmonton’s City Hall on Monday to watch Canada’s track and field team introduced, parents and loved ones said they’ll be careful. But none sounded too concerned.

World decathlon silver medallist Damian Warner has a group a group of about a dozen loved ones and coaches travelling to Rio, including girlfriend Jen Cotten, a 400-metre hurdler who didn’t make the Olympic team.

Cotten plans to wear a money belt and stick with the group when travelling back and forth from the stadium. Otherwise, she’s not “too worried.”

“I actually went to the Francophone Games in Lebanon in 2009, and people turned down that team saying it was too dangerous,” she said. But my dad is in the military and I feel like if he knew of something he would tell me not to go. It seemed relatively safe. We’d hear gunshots off in the distance once in awhile when the sun went down.

“But there’s so much security, I think anywhere in the touristy areas should be somewhat safe.”

Lynn Lalonde will travel to Rio with husband Mark and Genevieve’s boyfriend John Rasmussen. Because track and field goes late into the night, they’ve booked accommodations close to a metro line, to minimize walking time — especially when the sun goes down.

“And we’ve travelled a lot, you just have to really take precautions,” Lynn said. “We’ll take precautions as far as our credit cards, those types of things. We’ll wear long sleeves at night (to ward off mosquitos). Maybe we won’t wear our Canada gear on the metro, blend in with everybody else.”

Trent Stellingwerff has been to Rio several times on site visits as part of the Canadian Olympic team’s support staff. He said it comes down to making smart choices.

“I’m just going to not flaunt anything, and be more vigilant and aware. If you’re in the (athletes) bubble, you’re OK. If you’re outside the bubble, you just need to be more aware, and be aware of the neighbourhoods you shouldn’t go in. If you’re going to go into some slums, you’ve probably made a poor decision.”

The Canadian Olympic Committee will have “family and friends officers” available to help at Canada Olympic House, where loved ones can also stock up on mosquito repellent.