Yasir Naqvi is calling on the federal government to appoint more judges and make specific changes to the country's Criminal Code. 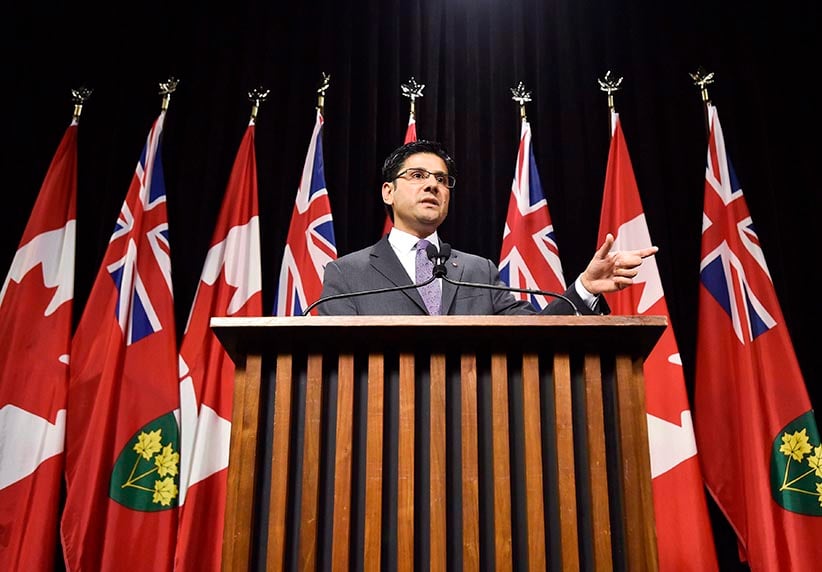 Yasir Naqvi, former Ontario Minister of Community Safety and Correctional Services, explains a draft regulation for public input that would prohibit the random and arbitrary collection of identifying information by police, referred to as carding or street checks at Queen’s Park in Toronto on Wednesday, October 28, 2015. (Nathan Denette/CP)

TORONTO – Ontario’s attorney general is calling on the federal government to help speed up the justice system by appointing more judges and making specific changes to the country’s Criminal Code.

Yasir Naqvi made the requests Tuesday, saying they came in light of a landmark Supreme Court of Canada decision on the constitutionally guaranteed right to be tried within a reasonable time.

The top court’s ruling last year, known as “the Jordan decision,” set out new deadlines for completing trials: up to 30 months in superior courts and 18 months for cases at the provincial level.

The Crown can challenge the notion that a delay is unreasonable by demonstrating “exceptional circumstances,” and for ongoing cases, the top court said the new framework must be applied “flexibly and contextually.”

Naqvi said he was concerned that guidance was not being applied evenly across the country.

In Ontario, the Supreme Court decision has led to stays of proceedings in a number of criminal cases.

“These stays of proceedings have caused some real emotional pain, and community anger…It impacts trust and confidence in the administration of justice,” Naqvi said in a speech at the Empire Club of Canada.

Naqvi said delays in the justice system were an issue that needed to be addressed, because the “pace of criminal justice is too slow,” and prompt justice is a Charter right. But changes are needed to ensure cases get to trial in a timely manner, he said.

In a letter sent to Justice Minister Jody Wilson-Raybould, Naqvi said the federal government has an important role to play in delivering timely justice.

“We must do everything possible to avoid stays of proceedings in criminal cases,” Naqvi wrote. “I have every confidence that you share my determination to address the formidable challenge posed by the Jordan decision.”

Naqvi asked the federal justice minister for help on three issues — filling 11 superior court judicial vacancies in Ontario, reforming the Criminal Code to limit the use of legal proceedings known as preliminary inquiries, and calling a special meeting with provincial and territorial attorneys general to discuss the impact of the Jordan decision.

Naqvi urged the federal government to introduce Criminal Code reforms aimed at “substantially limiting” use of preliminary inquiries, which take place in certain serious cases to determine if there is sufficient evidence for the matter to proceed to trial.

“We have found that the vast majority of preliminary inquiries result in the accused being committed to stand trial, yet this step in the process typically adds many months to the length of a criminal case,” he wrote.

Wilson-Raybould said she had received Naqvi’s letter and would be responding in due course.

“I have been working closely with my officials to engage with our provincial and territorial colleagues to address court delays and the effects of the Jordan decision,” she said in a statement. “Our government is committed to ensuring our criminal justice system works efficiently and effectively.”

One prominent defence lawyer disagreed with Naqvi, saying it would be “incredibly short-sighted” to curtail the use of preliminary inquiries.

“I think that they serve fundamental purposes,” said Dirk Derstine. “The first is to arrive at the truth of a given matter, that is to say by cross-examining and examining the case you’re more likely to arrive at the truth of the matter, and the second is often during a preliminary inquiry, one side or another comes to understand the strengths and weaknesses of their case better and resolutions are more likely in those circumstances.”

Naqvi also said the 11 superior court judicial vacancies in Ontario are resulting in hundreds of hours of lost judicial time every month.