'The health benefits of physical activity are well-known and obvious.' 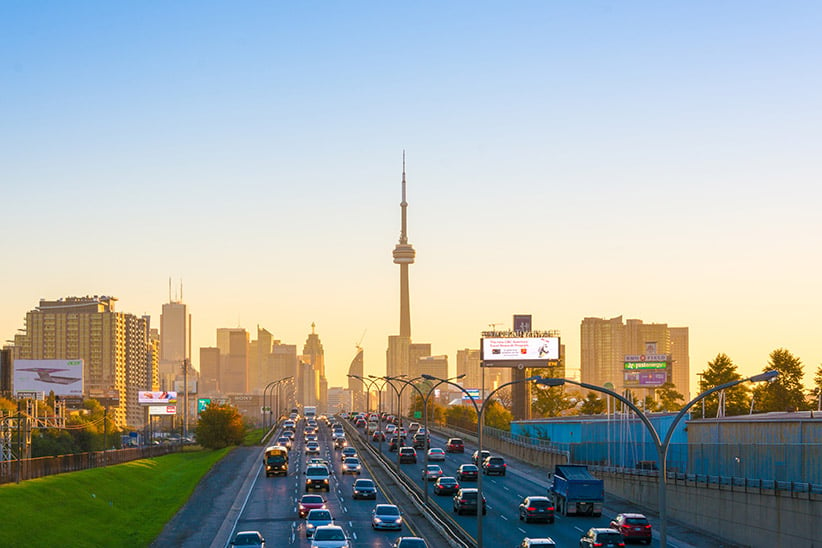 Toronto skyline from the Gardiner expressway entering the city during afternoon with CN Tower and other buildings in the background and two way traffic in the foreground. (Roberto Machado Noa/LightRocket/Getty Images)

TORONTO — An Ontario provincial cabinet minister is calling on the country’s most-populous city to reverse its ban on a classic Canadian pastime.

Street hockey is welcomed in other major cities like Calgary, but is banned by Toronto’s city bylaws for safety reasons. And as the city council is gearing up to vote on whether to uphold the ban, Ontario’s new minister of children and youth services sent an open letter to councillors Monday, asking that they vote to strike it down.

While Michael Coteau doesn’t have jurisdiction over the ban — street usage is governed by municipal bylaws rather than provincial legislation — he wrote that he hoped Toronto would set an example for other jurisdictions that prohibit street hockey.

“The health benefits of physical activity (like street hockey) are well-known and obvious,” Coteau wrote, adding that social skills, compromise and teamwork can also be learned through sport.

In Calgary, there has never been a bylaw explicitly banning street hockey, but city officials recently decided to clarify an existing bylaw to make sure there’s no confusion: street hockey is allowed, even encouraged.

Mary Ann Houston said the city does have a bylaw prohibiting people from leaving sporting equipment in the street after they’re done using it, but that the city doesn’t want to keep kids from playing.

“It’s a Canadian tradition,” she said.

Houston added that police officers actively encourage kids to play street hockey, and some even keep hockey sticks in their police cars so they can join in.

The director of the Healthy Active Living and Obesity Research Group at a children’s hospital in Ottawa said building “unorganized sport” like street hockey into kids’ lives will help their health far more than infrastructure and “palaces” for sports.

Plus, Tremblay said, street hockey is “the quintessential image of Canada.”

He said for that reason, street hockey shouldn’t be banned, it should be encouraged on residential streets with low speed limits.

For instance, in late 2010, media reports said an 11-year-old boy was struck by a vehicle while playing street hockey in Halifax and sent to hospital.

Halifax’s bylaws on street hockey are a little more nuanced than those of Toronto and Calgary. A city spokeswoman wrote in an email that street hockey falls under the “nuisance bylaw,” which prohibits people from obstructing traffic.

She wrote, “As far as enforcement, the officer would look at a number of factors to determine obstruction including traffic volume and whether the participants moved out of the way of oncoming vehicles.”

Even if the players didn’t move out of the way of oncoming traffic, officers would likely “use discretion” and talk to the people involved before issuing any fines, she said.

“I also believe that sometimes as government leaders we focus too much on the details of programs, policies, budgets and statistics, when the best thing we can do is just get out of the way,” he wrote.

Toronto council is to vote on the ban on Tuesday, but councillors are being urged by city staff to keep the prohibition in place, citing safety, and possible liability to the city if anyone gets hurt or if private property is damaged.