Alaa Al-Muhandis, 29, lived in Milton with husband and two children 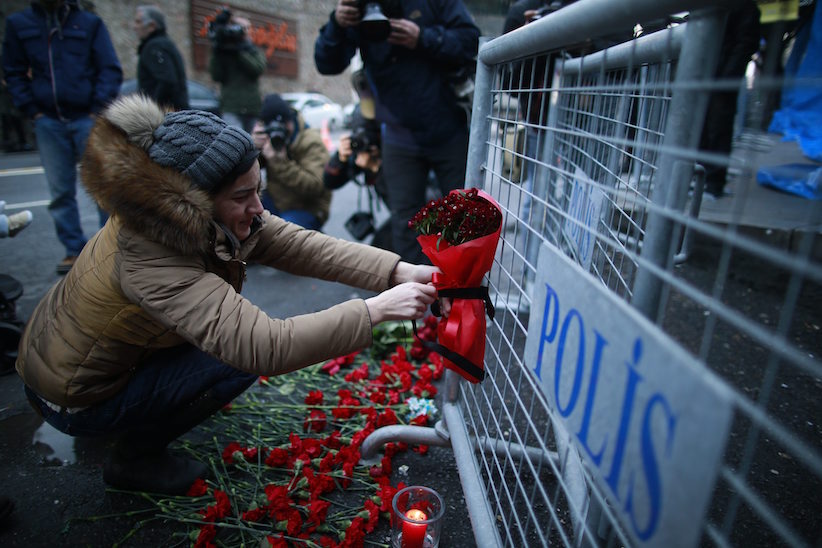 A young woman cries as she leaves flowers for the victims outside a nightclub which was attacked by a gunman overnight, in Istanbul, on New Year’s Day, Sunday, Jan 1, 2017. (AP Photo/Emrah Gurel)

TORONTO — Global Affairs Canada has confirmed the Canadian woman killed in an attack on a Turkish nightclub is Alaa Al-Muhandis.

She was one of the 39 people killed, most of them foreign tourists, when a gunman opened fire in a popular nightclub in Istanbul during New Year’s celebrations.

Ghada Saad, a friend of Al-Muhandis, said the 29-year-old lived in Milton, Ont., with her husband and two children.

She said she met her two years ago when Al-Muhandis hired her to help with a baby shower for her youngest son.

“She was a very, very nice girl, full of life and always so stylish,” Saad said of Al-Muhandis, who she said started her own business recently as an event planner. “She was like my little sister.”

Saad, who owns Mosaic Event and Party Rentals in Milton, said she had been working with Al-Muhandis recently.

Mohammed Hamoudi, the president of non-profit organization Mesopotamia Group, said he was shocked to hear of Al-Muhandis’ death.

He said he knew her professionally through her business, Looloo’s Arrangements. She had set up a booth at a cultural event the group organized in April.

Raitt wrote that “we never think that something like this can happen to us in Milton.”

Late Sunday, Prime Minister Justin Trudeau confirmed a Canadian was killed in the attack that also left as many as 70 others wounded.

“We mourn with the people of Turkey today and with all countries who lost citizens in this vicious attack,” Trudeau said in the statement.

“We also grieve the senseless loss of a Canadian citizen and remain steadfast in our determination to work with allies and partners to fight terrorism and hold perpetrators to account.”

The Islamic State claimed responsibility Monday for the shooting and the lone gunman who carried out the attack remains at large.

ISIL is claiming the attack is revenge for Turkish military operations against the group in northern Syria.