Alaa Al-Muhandis, 29, was always happy, with a smile on her face 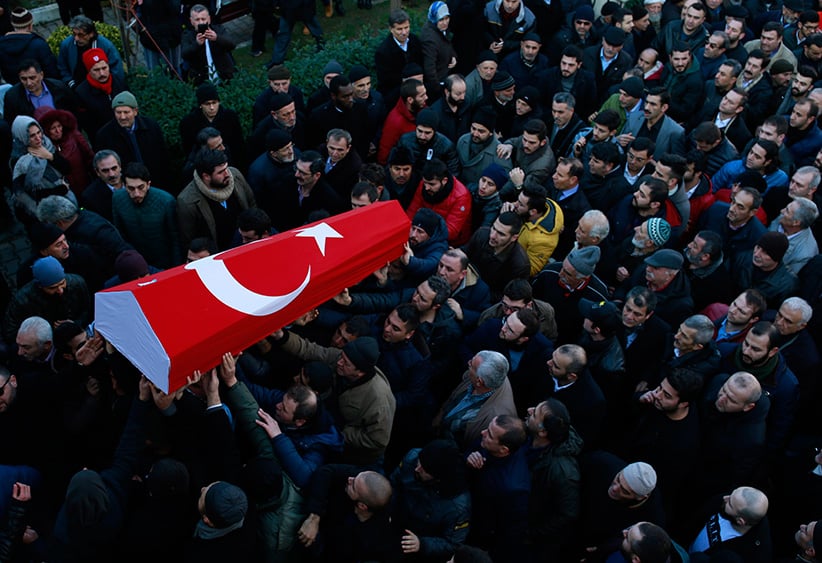 Mourners carry the Turkish flag-draped coffin of Yunus Gormek, 23, one of the victims of the attack at a nightclub on New Year’s Day, during the funeral in Istanbul, Monday, Jan. 2, 2017. (Emrah Gurel/AP/CP)

MILTON, Ont. — A friend of an Ontario woman killed in an attack on a Turkish nightclub remembers her as a happy person who was always smiling.

“She was a great person, always happy, always a big smile on her face and she will forever be loved and remembered,” an emotional Atrakchi said Tuesday.

Al-Muhandis was one of 39 people killed when a gunman opened fire at a nightclub in Istanbul during a New Year’s party. Nearly 70 others were wounded in the attack.

The Islamic State claimed responsibility Monday for the shooting and the lone gunman who carried out the attack remains at large.

The extremists said a “soldier of the caliphate” had carried out the mass shooting to avenge Turkish military operations against IS in northern Syria.

The funeral for the 29-year-old mother of two young children is planned for 12 p.m. Sunday at the Shahrayar Centre in Mississauga, Ont., according to a family friend who didn’t want to be named.

The friend said Al-Muhandis was quiet and sweet.

“The moment you start talking to her, you want to keep talking to that girl,” he said.

“You want to open your heart for her and start telling her your problems.”

The friend said she had spent months overseas, but was shocked to learn she was in Turkey.

Another friend said she had started her own business as an event planner, known as Looloo’s Arrangements.

On Tuesday, an eerie video emerged of a man believed to be the attacker, showing him taking a selfie as he silently toured Istanbul’s most famous square.

The camera never leaves the man’s unsmiling face as he walked through Taksim Square during the 44-second clip that was broadcast on state-run Anadolu television and other Turkish media.

It wasn’t immediately clear if the video was made before or after the New Year’s massacre at the Reina nightclub, or how it was obtained.