Mulroney also says Trump may be unorthodox, but he's smart, disciplined and will surprise many 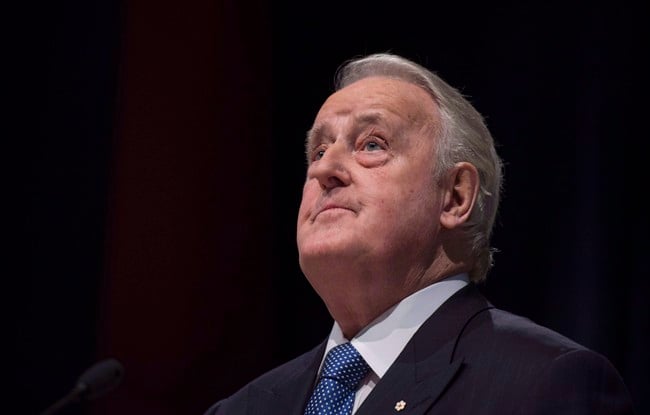 TORONTO – Former prime minister Brian Mulroney says Ottawa may face a “rough negotiation” when it comes to NAFTA, but he believes Canada will emerge with better relationships with the United States and Mexico.

Speaking before the Canadian Council for the Americas, Mulroney said U.S. President Donald Trump may be unorthodox, but he’s smart, disciplined and will surprise many.

“We’re going to come out of this in one piece – with a strong NAFTA and a strong bilateral and trilateral relationship,” he told the crowd.

Trump has called the North American Free Trade Agreement the worst trade deal the United States has ever negotiated and has vowed to revisit, or even scrap the agreement in favour of protectionist measures.

Mulroney, who has been friends and neighbours with Trump in Palm Beach, Fla., for years, said he felt Canada’s case “was advanced enormously” by Prime Minister Justin Trudeau’s meeting with the president.

“I got the American verdict on Mr. Trudeau’s visit last week and he got high marks. Let’s just leave it at that,” he said.

Following that meeting, Canada and the U.S. released a joint statement declaring that they will work at creating jobs, and continue talks on regulatory issues to make them more business friendly and cut costs without compromising health, safety, and environmental standards.

Trump also told reporters that he only wanted to “tweak” Canada’s portion of NAFTA, and warned that he was looking for more severe changes to Mexico’s portion.

Trade relations with the U.S. are critical to Canada. More than 75 per cent of Canada’s exports go the U.S., with more than $2 billion in trade happening between the two countries each day

Mulroney, who was one of the architects of NAFTA, told the council he doesn’t believe Canada will throw Mexico “under the bus” as efforts to renegotiate the agreement get underway, as some have suggested.

Later, Foreign Affairs Minister Chrystia Freeland said it is too early to talk about trade talks with the U.S. because Washington still has to confirm the secretary of commerce and trade representative positions.

“We are quite far from any concrete discussions,” she told a lunchtime panel with her Mexican counterpart, Luis Videgaray, at the same event.

She said both governments did not want to “get ahead” of themselves because trade talks have yet to begin, but she noted that once they do, all three countries will be working on it together.