Some officers are wearing wristbands in solidarity with Daniel Montsion, charged in the death of Abdirahman Abdi 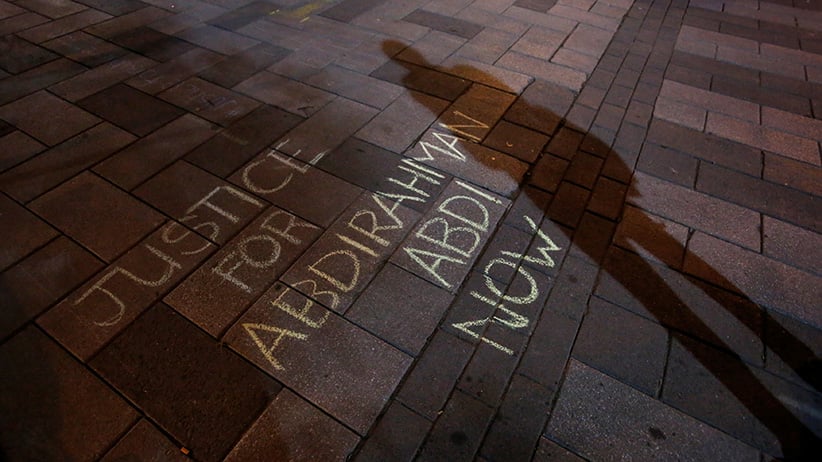 A man casts a shadow near a message written in chalk during a vigil for Abdirahman Abdi, a Somali immigrant to Canada who died after being hospitalized in critical condition following his arrest by Canadian police, in Ottawa, Ontario, Canada, July 26, 2016. (Chris Wattie/Reuters)

OTTAWA – Ottawa police leaders are asking fellow officers who are wearing wristbands in solidarity with a colleague charged in the 2016 death of a 37-year-old Somali-Canadian man to think carefully about the message it sends to the community.

“We must take into account the community perceptions of actions like these wristbands,” Ottawa police Chief Charles Bordeleau wrote Wednesday in an email to staff.

“There has already been a great deal of negative commentary and we should all be concerned about the long-term impact on public trust this could create,” he wrote. “I am also concerned about how it may impact members during the course of their duties.”

The message came after the CBC reported members of the Ottawa police were buying black-and-blue silicone wristbands in support of Const. Daniel Montsion, 36, charged in the July 2016 death of Abdirahman Abdi.

OPINION: Why we can’t trust SIU to probe death of Abdirahman Abdi

Adbi was pronounced dead in hospital one day after a physical altercation with two police constables who responded to calls about a disturbance at at Ottawa coffee shop. Montsion faces charges of manslaughter, aggravated assault and assault with a weapon.

The wristbands, according to the CBC, bear Montsion’s badge number and the message, “United we stand; divided we fall.”

A pretrial hearing has been scheduled for May 1.

The death of Abdi, a black Muslim, triggered multiple protests in Ottawa last summer, as well as in Toronto and Montreal.

MORE: Ottawa police officer to be charged with manslaughter

The Justice for Abdirahman Coalition, which has been pushing for more transparency, expressed “outrage” over the wristbands, calling the campaign an “insult” to the family of Abdi and those fighting against “police brutality.”

“This particular act of solidarity demonstrates a blatant disregard for human life,” the coalition said Wednesday in a news release.

In his message, Bordeleau said he understands the “sentiment” behind members wanting to show support for Montsion, but that “the executive, the chain of command and his association” are already supporting him in the court process.

Bordeleau also reminded officers they should not be wearing the wristbands while on duty, as they are not part of the uniform.

Eli El-Chantiry, chair of the police board, said in a statement he understood why police officers would want to show support for their colleague.

“However, the wristbands, even if well-meaning, have unintended consequences and are divisive,” said El-Chantiry, a local city councillor.

“We need to take a step back and reflect on the bigger picture in this case. As a community, we need to move away from an ‘us’ versus ‘them’ mentality.”

The Ontario government has named Philip Perlmutter, a Toronto-based Crown attorney, to prosecute the case.

No stranger to cases involving police, Perlmutter, of the Justice Prosecutions Unit, successfully a prosecuted Toronto police officer who was convicted in 2013 of assault with a weapon for using excessive force during the arrest of a protester on the lawn of the Ontario legislature during the G20 Summit in 2010.

The court heard Wednesday there will also be an out-of-town judge.

A designate from the firm of high-profile defence lawyer Michael Edelson appeared on behalf of Montsion in court.