Paulson admits he knew little about officer he criticized 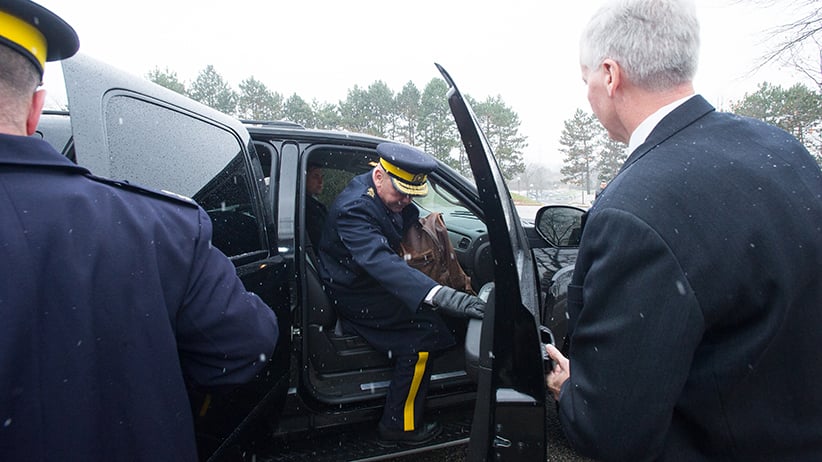 Two days after touting a new process for dealing with harassment within the RCMP, the country’s top Mountie found himself on a witness stand in Newmarket, Ont., explaining how, in one high-profile case, he seemed to give the benefit of doubt to the alleged harassers.

Bob Paulson testified Wednesday he’d been led to believe that the complaining officer, Sgt. Peter Merrifield, was “solidly and almost irretrievably embittered with the organization,” and that the officers Merrifield accused of harassing him were “blameless.”

“The view was that they had tried to respond to [perceived misconduct on Merrifield] as best they could, while dealing with a recalcitrant officer,” Paulson told Ontario Superior Court.

The commissioner’s testimony goes at least part way to explaining a broadside he launched at Merrifield during a June 2013 Senate committee hearing, where he characterized Merrifield as an agitator who was leading a movement to unionize the RCMP. He told the committee that Merrifield had tried to launch unethical investigations, adding witheringly: “Let us face it, some people’s ambitions exceed their abilities.”

The commissioner didn’t retract those words Wednesday. But he did acknowledge he knew few details of the case, and that he saw Merrifield as an “otherwise smart and effective officer who was really upset with his circumstances.”

Paulson was called to testify after Merrifield, a 17-year veteran who has served on some of the force’s vaunted national security units, sued the RCMP, alleging harassment, breach of fiduciary duty and abuse of authority. He fought all the way to the Supreme Court of Canada to have his case heard, and is seeking more than $500,000 in damages.

His trial has produced a few bombshells, including allegations that officers hostile to Merrifield tried to interfere with one of his investigations by discouraging a confidential informant from working with him; and that one of Merrifield’s commanders was caught attempting to hire a prostitute. Merrifield has said he brought the latter claim to the attention of his bosses, but it was never investigated.

All of it, he alleges, dates back to 2005, when his commanding officers took exception to his decision to stand for a federal Conservative nomination in Barrie, Ont. He lost, but a dispute over the wording of his campaign material—and whether he sought proper permissions—triggered a series of four internal code-of-conduct investigations by his superiors. None of the probes resulted in discipline, and Merrifield alleges they were nothing more than a witch hunt intended to discredit him and drive him from the force.

In 2008, Merrifield, 48, launched his lawsuit, claiming he was being denied coveted assignments and investigations, and arguing he could not expect a just resolution through the RCMP’s grievance process. In January 2012, not long after Paulson took the reins of the force, Merrifield fired off a lengthy email to the new commissioner detailing his complaints. Included in the missive was the allegation that one of the officers pursuing the investigations against him had been caught up six years earlier in a john sweep in London, Ont.

Paulson’s role in the saga is peripheral. He’d never crossed paths with Merrifield and had no direct hand in trying to resolve his complaints. But Merrifield’s legal team believes the commissioner inadvertently perpetuated the harassment because he was fed bad information. “The ramifications of that,” John Phillips, Merrifield’s lawyer, told Maclean’s recently, “have spread like a virus throughout the force, right to the top, so that people who aren’t even the harassers wind up perpetuating the damage to his career.”

In court on Wednesday, Paulson acknowledged receiving Merrifield’s 2012 email, but said he never personally looked into its allegations. Instead, he left the matter in the hands of Asst-Comm. Stephen White, who as commanding officer is in charge of RCMP operations in Ontario. Only after Merrifield began airing out his allegations publicly—in a Senate committee hearing, and on CBC TV’s Power & Politics in May 2013—did the issue come back on Paulson’s radar.

The commissioner said he asked White at that point for more information, and was told there had been “no malfeasance” on the part of the senior officers Merrifield had blamed, including Supt. Marc Proulx and Insp. James Jagoe.

Paulson said White also told him Merrifield was stiff-arming any attempt to resolve the issues informally: “[Merrifield] was very determined to have these claims of harassment validated,” the commissioner testified. (White was not scheduled to be a witness at the trial; whether he will be called in light of Paulson’s testimony is not yet clear).

How hard, if at all, Paulson’s trusted senior made to validate them is now the crux of the trial. At no point, Paulson said, did anyone tell him that all four code-of-conduct investigations against Merrifield—including two he referenced during his Senate testimony—came up empty.

Whatever their level of effort, the Mounties’ handling of the case is bound to face scrutiny as harassment in the RCMP—and harassment in general— surge back into the public conversation. Almost from the moment he assumed his command in late 2011, Paulson promised to confront the problem. On Monday, he joined Public Safety Minister Steven Blaney in announcing a new accountability act for the RCMP that included, among other things, a process to resolve internal harassment claims quickly and fairly.

Merrifield’s is one of several court proceedings, though,  suggesting the issue remains far from over—including a federal court decision last week that found Paulson had acted unreasonably in a case involving an officer who complained of harassment after being denied promotion.

In February, B.C. Supreme Court is to hear the case of Catherine Galliford, a former RCMP spokeswoman who alleges she endured years of sexual assaults, harassment and intimidation on the job.