On the visceral reaction to his Château Laurier reboot, the privilege of iconic buildings—and what he was trying to say 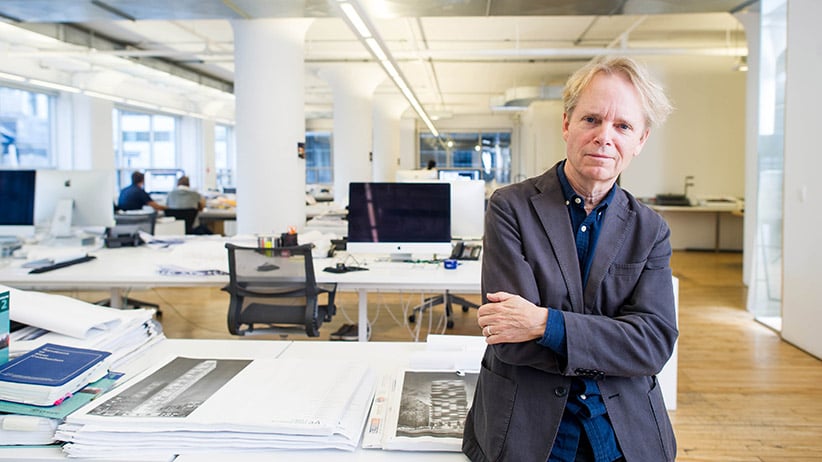 The owners of the iconic Fairmont Château Laurier in Ottawa—steps from Parliament Hill and a seat of unofficial power in the capital since it opened in 1912—recently unveiled plans for a huge expansion. Now a national historic site, the Château was the first Grand Trunk Railway hotel built by Charles Melville Hays in hopes of drawing tourists to his lines. But Hays never saw the hotel completed: he died in the sinking of the Titanic days before the scheduled opening.

The public reaction to the proposed expansion was largely, and loudly, negative: Ottawa mayor Jim Watson tweeted, “This falls under the category ‘back to the drawing board!’ ” The hotel’s owner, Larco Investments, will have to win over the city and the National Capital Commission for approvals before a single shovel meets the ground. But for Peter Clewes, with Toronto-based architectsAlliance, it’s been brutal to see the building design he coaxed into existence be excoriated.

Q: What was the context for this project that your design is responding to?

A: This is an extraordinary site. It’s under the purview of the National Capital Commission, so there’s a federal interest. It is arguably one of the most iconic hotel buildings in Canada, and it sits adjacent to a major public park and on the ceremonial drive in Ottawa, so it’s a very, very charged site and we’ve had to have tremendous regard for that. When we’re dealing with historic buildings, we don’t replicate, but we try to be subordinate and be deferential to them. 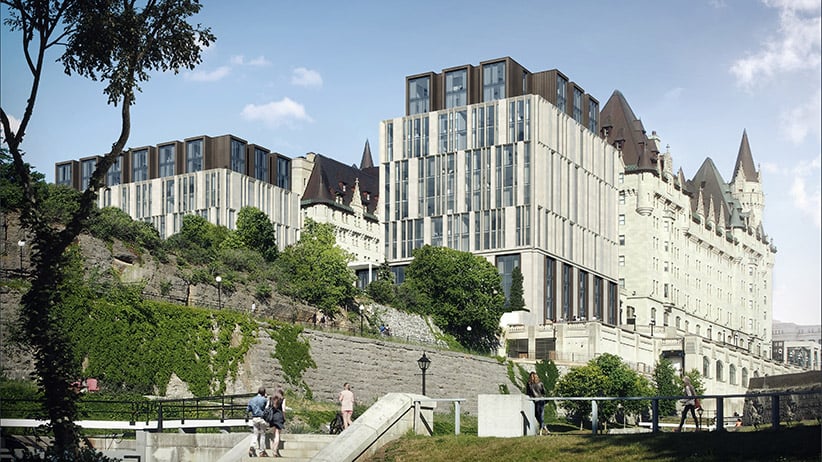 Q: How did the historical hotel building influence the look of the addition you designed?

A: The roof is a very steeply sculpted mansard roof that is probably the most iconic part of the hotel because it reads on the skyline; we tried to stay below that. The hotel is constructed of limestone and it has deeply incised windows, as was the style of the day, and it has a sense of solidity and timelessness. We’ve chosen to reinterpret that using limestone as a cladding material and doing very deeply incised windows, but in a much more contemporary manner, which is a series of vertical windows in a somewhat whimsical pattern—some have likened it to a bar code. What we’re trying to say is, look, the hotel is the most important building here, and we were simply trying to respond to that. [The addition] is physically separate from the hotel, and it’s linked with glazing, so there’s a very clear distinction between what is old and what is new. I think one of the positive outcomes of this redevelopment is to re-expose the ballroom windows on the north façade of the hotel, which were blocked by the parking structure. We’re proposing a courtyard in the centre of the addition that will allow those ballroom windows to be re-exposed.

Q: When you’re working with an iconic historic building like this, is it more of a blessing or a curse?

A: I think the best way to describe it is: it’s a privilege. Architects, I think we understand the privilege and how charged the site is, and we’re deliberately trying not to be arrogant in our design approach. Now, some may disagree, but we’re not trying to create a building that stands out on its own as ‘Look at me! I’m something to be reflected upon.’ It’s more deferential. This building is a cultural marker of the city at a time in its history when it was developing itself as the nation’s capital, around the completion of the national railway. It really speaks to the hopes and dreams not only of Ottawa, but of the country at that time.

Q: If you try to recreate a historical style, does it end up looking like a Disney or Las Vegas version of itself?

A: That’s absolutely the problem. It confuses history. You don’t know where one ended and the other began. The hotel itself is interesting: its antecedents are in 16th-century France, but that was an adopted style from the Gothic period, which came out of religious architecture in the 14th century. So it was a reinterpreted Gothic style, but the French at the time thought, ‘Hey, we want something that speaks to the nobility and the status of our public buildings and important people.’ [The Château Laurier] is far more whimsical and it doesn’t take itself seriously, but it is also speaking to this idea of nobility and importance. But to do that now would be just absolutely not right.

Q: When one of your designs is presented publicly, like this one, what is that day like for you?

A: Of course there’s a lot of trepidation. You hope. I’m a passionate person, and I care deeply about the work we do. It’s very, very important to me that it’s well received. But I know—I’ve been doing this a long time—first reactions are often negative, and I’ve often thought that one of the issues is fear of change. I’m used to the visceral reaction, and it’s difficult, but I also think it’s important—it’s important to have this conversation. Because if we are to believe or accept that buildings are cultural markers, if architects work in a vacuum with their own preconceptions about society, then we won’t be creating appropriate cultural markers.

Q: What do you think it is here that people are responding negatively to?

A: I think there’s a common thread amongst a lot of people that what came before was better, and we were more comfortable in our roots, looking back rather than looking forward. The nostalgia that comes from that—I think it’s a deep-seated human condition: yesterday is always better than today and the fear of tomorrow. I don’t think there’s anything absolutely wrong with that, it’s just the way we are. So when people are presented with something new, there is a very visceral reaction.

Q: When you put it in those terms, anyone who designs for public consumption is unwittingly addressing really deep human things, if we’re talking about fear of change and our sense of nostalgia.

A: Any artist will tell you that when they get negative criticism of their work, it’s personally hurtful to them. The problem with architecture is it goes with the territory, because it’s an applied art and because you’re messing about with people and their environment. You have to expect that kind of commentary and reaction; it’s completely natural and reasonable. If I could change it, I would love to have a one-on-one with people, but of course that’s impossible. It is human nature that you don’t hear from people that like it. They just go, ‘Hey, that’s great,’ and move on.

Q: What’s the relationship between public and expert opinion? You designed this building and obviously think it has merit, so how does that fit with a negative reaction from people on the street?

A: Public commentary absolutely influences our work. We have to respond to budget concerns, we have to respond to functional and programmatic concerns of the building, and we have to respond to public engagement. That’s what you sign up for when you decide to become an architect. We’re keenly aware of how charged the project is. I’d also like [critics] to reflect on the cultural markers of any society and any city. It’s really important that we not replicate what came before us, but we do something of our own, that’s reflective of our own time, of contemporary society.

Q: In the time you’ve spent in the hotel, what did you learn about the building and what kind of relationship did you develop with it on a human scale?

A: It’s a very inward-looking building, very reflective of its time in hotel architecture and design. It’s like your house in the city as a visitor, so you come to the house and you don’t want to be exposed, you want to be very secure—it has very grand, but very private, public rooms on the ground floor. Also, it is extremely well-crafted. It has such extraordinary attention to detail in terms of the materials and how those materials are put together. It’s a timeless building. It was put up to stand the test of time, to be there in 500 years, and that’s partly what makes it so remarkable and partly why people have such a passion for it. There’s a sense of immortality that, of course, we don’t have in our lives.