Plane makes an emergency landing ... onto a Calgary street 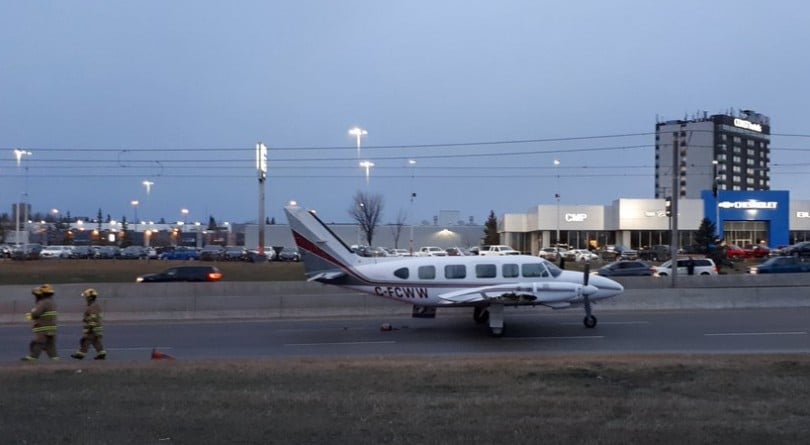 CALGARY – A small plane made an emergency landing on a northeast Calgary roadway Wednesday morning.

The fire department said the aircraft came down before 6 a.m. on 36 Street NE, just south of 16 Avenue – not far from the Trans-Canada Highway.

The plane was experiencing engine trouble, and the pilot didn’t believe they could make it to the airport. Canadian Press reported that the pilot had radioed that the aircraft was low on fuel.

A light pole sheared off part of the right wing, but the plane landed relatively unscathed.

Sgt. Duane Lepchuk said there was minimal traffic on the street at the time and no reports of drivers having to swerve to miss the plane, Canadian Press reported.

Yvonne was in a nearby Home Depot parking lot and watched it come down.

“You look up and you go: ‘that is kind of low, and you can hear it coughing like a video game, and you’re like, ‘ oh that’s going to crash’ and then sure enough, smack,” she said.

Six people were on board –four passengers and two crew members– but no one was injured on the plane or on the ground.

The plane remained on the street during the morning rush and police set up detours around the scene. There was no immediate word on the origin of the plane’s flight, or who owns the aircraft.