Due to the number of stores, they 'can only be supplied by illegitimate sources often tied to organized crime,' say police 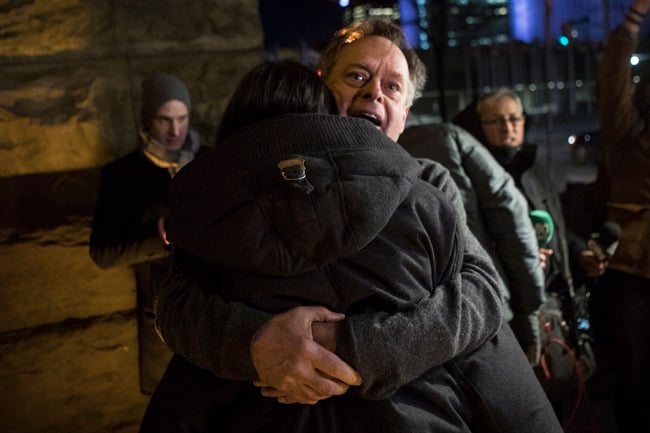 Marc Emery hugs his wife, Jodie, outside a Toronto court after being released on bail on Friday, March 10, 2017. THE CANADIAN PRESS/Chris Young

TORONTO – Police in Toronto are accusing Cannabis Culture marijuana dispensaries of being part of a “large franchise operation of alleged high-level drug traffickers.”

Prominent marijuana activists Marc and Jodie Emery — who own the Cannabis Culture brand — were granted bail Friday after their arrest on Wednesday.

Officers seized $250,000 in cash in several currencies, 65 kilograms of marijuana and 2.4 kilograms of cannabis extract and other drug paraphernalia after searching seven Cannabis Culture stores and several homes on Thursday, police said.

Given the amount of marijuana the stores “can only be supplied by illegitimate sources often tied to organized crime,” acting Insp. Steve Watts alleged.

“The public should know that this isn’t an altruistic venture, this is purely a profit-motivated venture,” Watts said. “Anyone with a prescription for marijuana can go through Health Canada, who have an abundant supply.”

The Emerys appeared in a Toronto courtroom on Friday afternoon where they were granted bail with several conditions, including a ban on possessing or consuming marijuana and other drugs except with a prescription.

The Emerys called on the federal Liberals to stop enforcing the current laws and immediately act on their promise to legalize marijuana. Marc Emery said the high profile role he and his wife have taken in fighting for legalization for more than 20 years is the reason police are targeting them.

“The government fears us,” Emery told reporters minutes after emerging from a Toronto courthouse late Friday. “Our example has been the shining example for 25 years, we have been at the forefront of making this legalization happen.”

“I think this is all part of the struggle and we’ll bear through it well,” Emery added, his wife’s head on his shoulder at times as the couple angrily denounced the governing Liberals.

In addition to the Emerys, police charged three other people on Thursday. Thirty-seven-year-old Chris Goodwin and 31-year-old Erin Goodwin, both of Toronto, and 29-year-old Britney Guerra of Stoney Creek face charges that include conspiracy to commit an indictable offence.

“Our history of enforcing the law against illegal cannabis dispensaries is well established,” Pugash said Thursday. “This is the latest effort in our law enforcement, and I’m certain there will be further action.”

Toronto police also cited safety as a reason for the raids on the dispensaries.

“Included in the sale of marijuana, was shatter, which our officers purchased. Shatter is a distilled marijuana resin that is far more potent,” Watts said.

“It is also dangerous to produce,” he said noting an explosion at a dispensary in August 2016 that blew out windows and left a man injured.

The number of reported robberies of dispensaries in the city is also a community safety concern, he said.

“There were three instances where firearms were discharged and, on one occasion, two people were stabbed,” he said.