Meghan won't accompany Harry to an early morning ceremony, or visit a rainforest project during the Fiji and Tongo legs of the tour 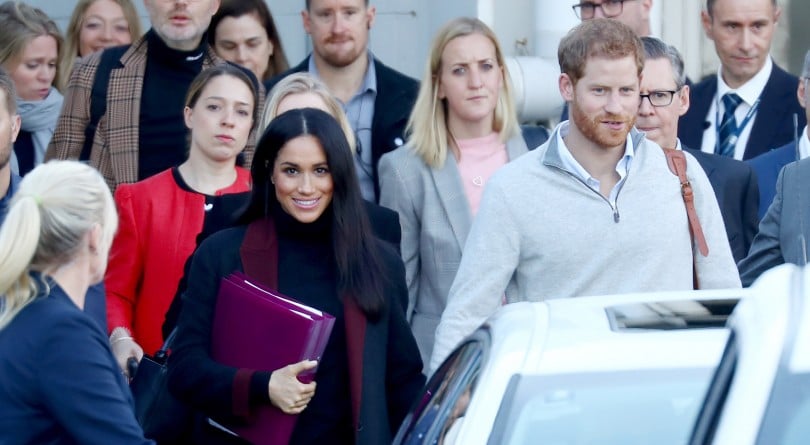 OCTOBER 15, 2018: SYDNEY, NSW - (EUROPE AND AUSTRALASIA OUT) Prince Harry, Duke of Sussex and Meghan, Duchess of Sussex arrive into Sydney International Airport in Sydney, New South Wales. Prince Harry and Meghan Markle are in Sydney ahead of the Invictus Games. (Photo by Hollie Adams/Newspix/Getty Images)

Talk about starting a royal tour with a bang: On the eve of their first major trip, Prince Harry and Meghan, Duchess of Sussex announced that she is pregnant with their first child. The news comes four months after they were married on May 19 in St. George’s Chapel at Windsor Castle. The newest member of the House of Windsor is expected in the spring.

They “are delighted to be able to share this happy news with the public,” the announcement stated. Public congratulations poured in, including from Doria Ragland, Meghan’s mother, who “is very happy about this lovely news and is looking forward to welcoming her first grandchild.” The baby will be the first for Harry and Meghan, the fourth grandchild for Prince Charles and the eighth great-grandchild for Queen Elizabeth II.

Royals usually make a splashy start to their foreign tours by walking down the stairs of an aircraft, suit immaculately pressed, hair perfectly coiffed. In September 2017, images bounced around the world of Prince William, Kate and their two children, George and Charlotte, arriving in Victoria for their Canadian tour. The family wore coordinating shades of blue, Kate with the Queen’s diamond maple leaf brooch pinned to her dress, as they greeted Canadian officials including the governor general and prime minister.

But Harry and Meghan slipped quietly into Sydney yesterday to get some rest before the start of an intense, 16-day, 76-engagement tour that will see them travel more than 15,000 km in Australia, Fiji, Tonga and New Zealand. Well, as quietly as possible with a news helicopter following their motorcade to their accommodation in Sydney, Admiralty House, the governor general’s residence. It’s there that they will officially begin their tour, as they are welcomed by Sir Peter Cosgrove and meet representatives from each of the 18 nations participating in the Invictus Games, which start on Oct. 20.

Given Harry and Meghan have made no secret that they wanted to start a family as soon as possible—“Hopefully we’ll start a family in the near future,” said Harry during their engagement interview—the announcement wasn’t unexpected. The pregnancy rumour mill has been in high gear for weeks, fed by wild speculation. In early September, the Australian tabloid New Idea claimed the tour was being called off due to her pregnancy just a few days before royal officials released the couple’s detailed tour itinerary. And when Meghan, 37, wore an electric blue Jason Wu dress featuring elaborate, tummy-concealing front pleats to an evening event in early September, one of many who openly wondered about whether she was expecting was royal photographer James Whatling, who tweeted, “Right, the indomitable Mrs. Whatling has spoken and without any prompting she texted me, ‘She looks pregnant to me.’ Make of that what you will, but she knows these things.” Speculation tamped down after her clothes returned to their usual form-fitting style, then flared again on Friday when she wore her tailored Givenchy coat half open. (Yes, this a bit silly, but royal sometimes clothes sleuthing can prove to be accurate. In November 2012, I compared belt holes on Kate’s coats to figure out she was pregnant a week before it was officially announced.)

Yet, the news still caught the press unawares. In part that’s because Meghan is travelling to areas that have the mosquito-borne Zika virus, in particular Fiji and Tonga. As the U.S. Centers for Disease Control state, “Zika infection during pregnancy can cause serious birth defects. Therefore, pregnant women should not travel to Fiji.” The CDC has an identical warning for Tonga.

Royal officials on the tour state that Meghan received medical advice before deciding to continue with their short visits to both nations. As well, her exposure to Zika-carrying mosquitoes has been reduced. She won’t accompany Harry to an early morning wreath laying at the Fijian war memorial or go into the Colo-i-Suva forest, now part of the Queen’s Commonwealth Canopy project.

This isn’t the first time a royal has been pregnant during a gruelling royal tour. In 1959, Queen Elizabeth II and Prince Philip were in the middle of their exhausting 45-day, 24,000-km tour of Canada when the monarch realized she was pregnant with her third child. New, larger outfits were hastily made and sent from London and her husband took over some of her duties, but aside from that, the tour continued as scheduled. Other than some speculation as to her lack of stamina, there was little gossip about a possible pregnancy in the media. And, more importantly, it wasn’t announced until after the tour ended. That isn’t possible in today’s world of instant information, especially when it involves a royal bride. Any cancellation by Meghan of an event on the meticulously scheduled tour would cause rampant speculation.

So announcing the pregnancy was the smartest move. It ends all the conjecture and allows for understanding if Meghan has to scale back her schedule. There are two guaranteed side effects: the bookmakers have started collecting bets on the baby’s name (early money is on traditional royal names like Alexander, Alice and Victoria at William Hill) and they are going to be inundated with teddy bears, baby clothes and other presents.