Jay-Z and Beyoncé, Prince William and Boomers on the Plains

Names in the news 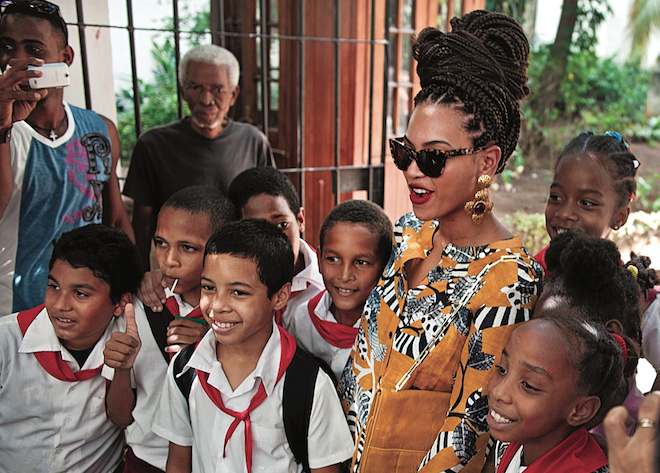 Jay-Z and Beyoncé Knowles’s choice of Cuba for a few flashbulb-streaked days off raised hackles in the U.S., which has had an embargo against the island country since 1960. Though the trip was cleared with the U.S. Treasury and therefore legal, critics wondered why one of the most famous couples in the world would visit a country with such an appalling human rights record. “There are a lot of better places they could go where they’re not feeding a monstrous regime,” said Rep. Ileana Ros-Lehtinen, of Florida.

The bloom is off

Prince William may have to brush up on his ability to appeal to children before his wife has a baby. On a trip to Glasgow, Scotland, the prince tried to kiss a four-year-old Scottish girl in a princess costume, and the girl pulled away from him and hugged her mother for support, refusing to allow him near her or to give him the flower she was holding. William laughed it off and the girl handed the flower to Kate. The girl’s mother claimed she didn’t have anything personal against William, but simply “got really shy.”

Dave Claringbould says rural Manitoba is not the friendliest place for an openly gay businessman. Claringbould and his partner started the Pots N Hands restaurant in the small town of Morris, near Winnipeg, only to announce four months later that they were closing down: they had received insults, including a customer who asked if he would catch sexually transmitted diseases from their food, and other customers stopped coming after finding out about their relationship. The publicity might save the restaurant, though; the premier of the province, Greg Selinger, has announced that he will eat there as a show of support for tolerance.

Gilles Duceppe is proving there are second acts in Canadian politics—and they can be quite lucrative. The governing Parti Québécois tapped the erstwhile Bloc Québécois leader to co-lead—along with former PQ minister Rita Dionne-Marsolais—a $1.5-million commission investigating what effects the federal government’s changes to Employment Insurance will have on Quebec society. The commission is part of the PQ’s “sovereignist governance” model, through which the PQ hopes to highlight the shortcomings of the federal system, and ramp up support for sovereignty. Duceppe will be paid $1,100 a day for the privilege, though he says he will voluntarily take a cut in his $142,000 federal pension.

Gérard Depardieu has made it abundantly clear he is done with France—moving to Belgium and becoming a Russian citizen as part of his erratic protest against President François Hollande’s efforts to tax the ultra-rich. So it wasn’t a surprise that he failed to show up in a Paris court last week to answer charges that he was driving drunk when he fell off a motor scooter last November. But the excuse provided by his lawyer did raise some eyebrows: the once-celebrated actor was in New York, playing another disgraced national icon, Dominique Strauss-Kahn, in a new film. The sordid fall of the former head of the International Monetary Fund, accused, then cleared of sexually assaulting a hotel maid—and later revealed as a frequent participant in hooker orgies, paid for by political supporters—was certainly cinematic. But if Depardieu is really looking to reconnect with audiences, might we suggest a reality show?

It was a long time coming, but Rob Ford, Toronto’s embattled mayor, is once again tasting victory. After a three-hour debate, and a fair bit of arm-twisting last week, he convinced council to approve a Hero Burger franchise for the snack bar that sits next to the iconic ice rink in front of City Hall. Bureaucrats had recommended the deal, but then the politicians had balked, expressing a desire to have more “diverse” food offerings. Some questioned why Ford would spend his rapidly dwindling political capital on such an issue, but the avowed fast-food lover told reporters it was important to him and the city. “Now we can get revenue and sell some burgers—it is going to be good.” And coming amidst yet more turmoil—revelations that, on average, he spends just five hours a day at the office, and news that he has added yet another football coach to his staff—it was somehow fitting: as Rome burns, Nero griddles.

As countless pro-democracy activists will grudgingly attest, Vladimir Putin isn’t easily fazed. In fact, during a recent gay-rights demonstration against his appearance in Germany, the Russian president seemed downright tickled by the parade of naked flesh that passed before his eyes when members of the women’s rights group Femen staged a surprise topless protest, while a bemused chancellor of Germany, Angela Merkel, looked on. Of the protest, Putin said, “I liked it.” Of Putin, the protesters later said he’s “a bastard.”

California’s attorney general, Kamala Harris, did what no one else has been able to do: she got Fox News to defend Barack Obama. The U.S. President got in hot water when he referred to Harris, who was elected in 2003, as “by far the best-looking attorney general.” Obama was criticized for perpetuating the stereotype that female elected officials should be judged by their looks. But the hosts of Fox & Friends, normally huge Obama opponents, sprang to his defence: “She is pretty! So what?” exclaimed pretty blond co-host, Gretchen Carlson. Obama himself called Harris and apologized for the “distraction” his remarks caused.

It’s hard to imagine what Paolo Di Canio, the former Italian footballer and star of the English Premier League, was thinking a number of years ago when he described himself as a “Fascist, but not a racist” to an interviewer. But it’s even harder to fathom why Sunderland AFC, a team struggling near the bottom of the Barclay’s standings, thought no one would pick up on that tidbit when they hired the 44-year-old as their new manager last week. Di Canio, who was pictured at least twice during his playing days giving fans the one-armed salute favoured by Hitler and Il Duce, insists his words and actions have been taken out of context. But that hasn’t comforted many of the club’s supporters, including David Miliband, former MP and brother of Labour Party Leader Ed, who resigned his position as Sunderland’s vice-chairman, in protest.

A ring of delusion

Dave Hilton is forgiven, even though he still says he did nothing wrong. In 2001, the once-famed boxer was convicted on nine charges of sexually assaulting his two daughters when they were teenagers. In an interview with the Journal de Montréal, Jeannie and Anne-Marie said their father deserves a second chance. Hilton, whose girlfriend recently gave birth to a baby girl, has maintained his innocence throughout—despite serving two-thirds of a 10-year prison sentence for the abuse. There is apparently no end to his delusion: the 49-year-old is currently planning a return to the ring.

Call it Boomers on the Plains. Officials in Quebec City announced that the city will host the wrinkly trifecta of Paul McCartney, Céline Dion and the Rolling Stones on the Plains of Abraham during the muggy summer months (separately, alas). Once the stage for the British takeover of New France, the Plains have since become a venue of choice for aging rockers, including Madonna and Roger Waters last year. Part of the allure is its size: 65,000 people can easily crowd into the space that is practically within spitting (or hobbling) distance from downtown.

Pablo Neruda is going to rise from the grave. The Nobel prize-winning Chilean poet, who died mysteriously soon after the socialist Salvador Allende government was overthrown in 1973, has long been the subject of rumours that he was poisoned. Now a judge has agreed that his body can be exhumed and tested after several toxologists, including three Canadians, declared that it would in fact be possible to check a 40-year-old corpse for evidence of poisoning.