Long-running baboon war at Toronto Zoo comes to an end

Vicious fighting among the baboons began shortly after the troop's leader, 16-year-old Betty, was euthanized 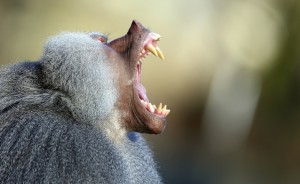 TORONTO – A brutal battle for the throne of a baboon troop at the Toronto Zoo that erupted when the matriarch died became so vicious that staff intervened with hormone treatments to take “a little bit of an edge off” the fighting females.

Medical records show that while the intervention in March of last year helped reduce the number of vicious attacks and resulting injuries, it also helped an unlikely female to emerge as queen in the baboons’ game of thrones.

The fighting — first reported by The Canadian Press in late 2015 — began shortly after the troop’s leader, 16-year-old Betty, was euthanized.

Baboon troops are run by females, and their behaviour dictates that the matriarch’s oldest daughter become queen. But zoo staff have said Betty’s oldest daughter, Molly, was still too young to assert her dominance when her mother died in December 2014.

Putsie, the troop’s eldest female, saw an opportunity to grab the throne with support from her three daughters, Kate, Kristina and Kalamata.

Kalamata, who was at the bottom of the hierarchy one year ago, now wears the crown with her mother’s blessing, said Maria Franke, the curator of the zoo’s mammals.

Molly and her sister, Susan, became the victims of much of the fighting, which left them with numerous deep lacerations near their eyes and tails.

The fighting, which culminated in March last year, according to medical records obtained through freedom of information legislation, left Molly’s tail so damaged part of it had to be amputated. It also led to dozens of injuries among the other females of the 12-member troop, some that required surgery.

It’s unclear exactly who inflicted which wounds on whom, as the attacks usually occurred at night, but the zoo said the factions were clear: Putsie, Kalamata, Kate and Kristina on one side and Molly and Susan on the other.

“Molly didn’t have the backing,” Franke said in an interview.

In total, Molly’s been injured at least 17 times over the past two years, the records show.

On March 2, 2016, a keeper noticed “a large fresh wound” on her tail, according to the medical records. The next day, “Molly is holding her tail in her hands.”

On March 8 — Molly’s seventh birthday — the zoo staff took a closer look at her injury. They found tendons and muscles in her tail were exposed, so they decided to amputate six centimetres off it, according to Chris Dutton, the zoo’s senior veterinarian.

The next day, a recovering Molly, described as one of the youngest and “largest” females in the group, had some help from the zoo’s oldest male, Bwana Joe, records show.

“The dominant male appears to protect her since the surgery,” the medical records show.

Kalamata had much of her hair ripped out in 2015 as she suffered multiple injuries from multiple attacks. At one point, zoo staff contemplated amputating part of her tail, but eventually they let her be.

The attacks against Kalamata continued in early 2016, which led to a “deep wound along her upper left eyelid” that was partially closed, and a cut along her right shoulder.

After 14 months of bloody fighting, zoo staff decided to give hormonal contraception to all of the females on March 14, 2016, the records show.

Staff surgically implanted devices that suppress estrus — which the zoo refers to as “cycling”— and the hormonal surges that go along with it.

“We’ve used it to regulate the females so that there’s not this angst in the group, but it takes a little bit of an edge off,” said Franke.

“We don’t want to change the behaviour of the animals per se, you know, to be sleepy, because that would exacerbate the situation,” he said.

Dutton and Franke said the fighting has diminished significantly since the hormonal interventions.

“I think how we moved forward dealing with the situation just goes to show it helped,” Franke said.

Medical records also indicate far fewer injuries since the females began contraception — there is no chance for reproduction as all the males are neutered.

Still, there are some fights — and Molly is taking the brunt of it.

She suffered at least two tail injuries in July and August —one a deep wound. The keepers also found a deep cut over her left eye and a smaller one over her right.

The swelling was so bad it pushed the eyeball deeper into the socket, according to the medical records.

She now spends much of her time with her sister, Susan.

Both Kate and Kristina have suffered a few injuries since the hormone intervention, but not Kalamata. Through the past year, she has begun hanging out with the troop’s males, who generally stay to themselves and away from the fighting, Franke said — a clear sign Kalamata is on the throne.

Although there are indications Putsie is still pulling the strings as the troop’s puppet master, given she only had two minor injuries during the battle, Franke said.

She also still dominates feeding time, not allowing any other females, including Kalamata, to eat until she’s finished.

“Putsie is probably allowing Kalamata to take over because she doesn’t feel threatened by her because it’s her daughter,” Franke said.