Colby Cosh remembers the columnist and former publisher of the influential Alberta Report, who died Sunday at 63 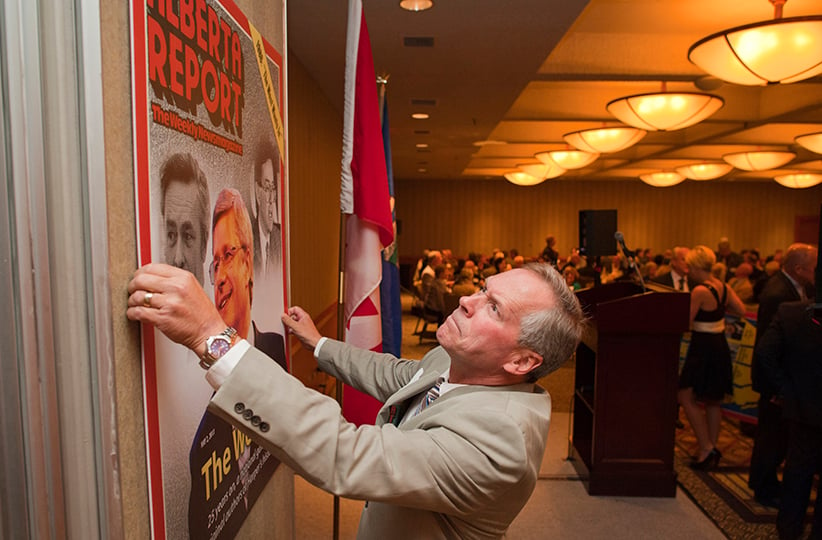 The grapevine brings word that my old boss, Link Byfield, has died at the age of 63. Link succeeded his father, Ted, at the head of Alberta Report magazine in 1985; he was a colleague to, or an editor of, many people who are now leading figures in Canadian journalism. Alberta Report, the last of whose incarnations blew up with me aboard in 2003, is remembered as a voice of Western defiance and cranky social conservatism.

It was that. But when I look at the news scene now, what stands out is Alberta Report‘s independence. It was separate from major media conglomerates, which was important when exercising the rights of a free press meant owning one. More importantly, it had a subscriber-driven business model, leaving it relatively free to defy advertisers, and it recruited writers from outside the eastern guild system, with its narrow pipeline leading from journalism school to the corner office.

This made it a place of intellectual diversity and colour: the editorial agenda was right-wing, and Alberta-chauvinist when not outright separatist, but the copy was written by everyone from itinerant philosophy students to Maoist drug addicts. I quit grad school to work at AR, and in retrospect AR was a lot more like what I had expected grad school to be than actual grad school was: a world of late-night arguments, comic banter, outrageous ideas and occasional adventure.

Link oversaw it all. To this day I am asked about the legendary Ted far more than I am about having worked for his son: until 2003 people thought of Ted as the presiding figure of Alberta Report. Link actually ran AR for twice as long as Ted did. He was the equal of his father (and his equally sharp mother, who died in July) as an editorialist and thinker. But he was less dominant a personality, less of an ultra-confident charmer.

He had not, after all, spent his formative years as a newsman working close to power in Washington and Toronto. My impression is that Link had spent his early twenties knocking around Western Canada taking drugs: I don’t know if you could call him a dealer, but I gathered he had not exactly been averse to a quick profit. He experienced the deepest of the deep Seventies, then straightened out and went to work for the family business.

For some reason that picaresque early life never showed through in his writing. When he would write an editorial arguing that the lash is more humane and effective than prison, which he occasionally would, he would never dare add a paragraph starting with “Here’s how I know.” Critics would ask what Link Byfield could know of life’s darker side, of hard luck and danger and incarceration.

In conversation he was very different—a man of sympathy and understanding, gentle and funny. When we would argue about law-and-order issues it was usually me who was on the harsh “conservative” side. I must have heard him denounce capital punishment five times for every one I heard him mention abortion. Unlike his father, he spoke in the slow, laconic way of a rural westerner, and he shunned the city, preferring to live on a sunny hilltop among the French and the Indians in half-wild western Sturgeon County.

The story of Alberta Report is the story of both Ted and Link. Ted left the central Canadian news business in the late Sixties to found a series of Christian private schools: this was a conscious “drop-out” from a successful conventional career, a mirror-image Sixties rebellion against the system. It just so happened that Ted was following Christ and the Church Fathers, rather than Timothy Leary or Charles Manson.

The magazine began as a side project that paid reporters a token dollar a month and gave them room and board, with food cooked in a collective mess, in Edmonton’s west end. If this sounds suspiciously like a commune, it was one—and the magazine maintained some of that countercultural, fraternal flavour until its demise. It’s Ted Byfield’s great secret: he’s a hippie, only with the opposite polarity.

Some of his children, including Link, spent time as real hippies. They found that it didn’t add up, that the tethers of order and family and work had value after all. It makes you wonder how much of what we call our ideology arises from circumstance, or even emerges from quarrels with our past selves. I wish I could go back and have a long chat with Link about it over two coffees and a messy desk—his or mine would do equally well.