Alberta Premier says she'll go to B.C. as early as next week 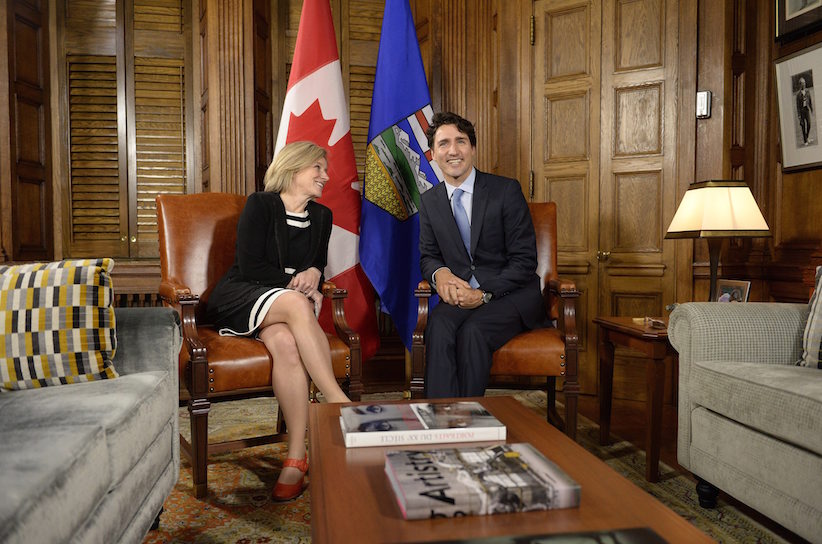 EDMONTON — Alberta Premier Rachel Notley says she will head to British Columbia as early as next week to make the case for Kinder Morgan’s Trans Mountain pipeline expansion.

“It’s really important for me to be able to go out there and say to those people who link the pipeline to the issue of climate change and an increase in greenhouse gas emissions that, in fact, our climate change leadership plan has very effectively delinked those issues,” Notley told reporters Wednesday in a conference call from Ottawa.

The new pipeline is safer than moving oil by rail, she said.

“It increases the return for Albertans — and frankly all Canadians — but it doesn’t increase the volume (of greenhouse gas emissions),” she said.

Notley’s government has passed, or is in the process of passing, sweeping changes to environmental, electricity, and tax rules to reduce Alberta’s greenhouse gas emissions and move toward renewable energy sources.

A bill now before the legislature will cap total oilsands emissions at 100 megatonnes a year. The current emissions are about two-thirds of that.

Prime Minister Justin Trudeau announced federal approval of Trans Mountain on Tuesday and said it would not have been possible without Alberta’s plan.

In B.C. Wednesday, Premier Christy Clark said the feds are close to meeting her government’s five conditions for its approval of the pipeline, but wants more assurances on spill response, jobs and economic benefits for B.C.

The pipeline is expected to be a key issue in May’s B.C. election, potentially putting Notley at odds with her NDP colleagues as they challenge Clark’s Liberal government.

Notley said she is ready for the debate.

“This is not a new thing for B.C., quite frankly,” said Notley.

“The NDP in B.C. had to manage very profound divisions within its own party over (logging in) Clayoquot Sound and forestry,” she said.

“They’re tough conversations, but … the values that drive me as a New Democrat are both the need to make real progress on protecting our environment but to do so in a respectful way to the working people.”

It was at times a rocky path for Notley and Trudeau, who were both in Ottawa for Tuesday’s announcement.

Last month, Notley announced she would not go along with Trudeau’s plan for a escalating floor price on carbon that would reach $50 a tonne by 2022.

Alberta’s plan tops out at $30 a tonne, and Notley said then she didn’t know how her province would meet $50 a tonne without action on pipelines.

She said she is now onside with the $50 price, but said it is still linked to progress on projects like Trans Mountain. The $6.8-billion project would triple the capacity of an existing line to take crude from Edmonton to Burnaby, B.C.

Alberta is in the midst of a prolonged slump in oil prices that have led to thousands of job losses and a budget deficit this year pegged at $10.8 billion.

Notley says a pipeline to tidewater is critical to reach Asian markets and fetch a better price for oil instead of being tied solely to the U.S.