By Yuri Kageyama and Louise Watt, The Associated Press May 15, 2017

TOKYO – The worldwide “ ransomware” cyberattack wreaked havoc in hospitals, schools and offices across the globe on Monday. Asia reported thousands of new cases but no large-scale breakdowns as workers started the week by booting up their computers.

The full extent of the damage from the cyberattack felt in 150 countries was unclear and could worsen if more malicious variations of the online extortion scheme appear.

The initial attack, known as “WannaCry,” paralyzed computers running Britain’s hospital network, Germany’s national railway and scores of other companies and government agencies around the world.

As a loose global network of cybersecurity experts fought the ransomware, the attack was disrupting computers that run factories, banks, government agencies and transport systems in scores of countries, including Russia, Ukraine, Brazil, Spain, India and Japan, among others. Among those hit were Russia’s Interior Ministry and companies including Spain’s Telefonica and FedEx Corp. in the U.S.

Chinese state media said 29,372 institutions there had been infected along with hundreds of thousands of devices.

Auto manufacturer Renault said one of its plants, which employs 3,500 people in Douai, northern France, wasn’t reopening Monday as technicians dealt with the cyberattack’s aftermath. The temporary halt in production was a “preventative step,” Renault said, giving no details on how badly the plant was affected by the malware.

In China, universities and other educational institutions were among the hardest hit, possibly because schools tend to have old computers and be slow to update operating systems and security, said Fang Xingdong, founder of ChinaLabs, an internet strategy think-tank .

Elsewhere in Asia, the Indonesian government urged businesses to update computer security after the malware locked patient files on computers in two hospitals in the capital, Jakarta.

Officials in Japan and South Korea said they believed security updates had helped ward off the worst of the impact. But the South Korean cinema chain CJ CGV Co. was restoring advertising servers at dozens of theatres after the attack left the company unable to display trailers of upcoming movies.

Experts urged organizations and companies to immediately update older Microsoft operating systems, such as Windows XP, with a patch released by Microsoft Corp. to limit vulnerability to a more powerful version of the malware _ or to future versions that can’t be stopped.

Paying ransom will not ensure any fix, said Eiichi Moriya, a cybersecurity expert and professor at Meiji University.

“You are dealing with a criminal,” he said. “It’s like after a robber enters your home. You can change the locks but what has happened cannot be undone. If someone kidnaps your child, you may pay your ransom but there is no guarantee your child will return.” 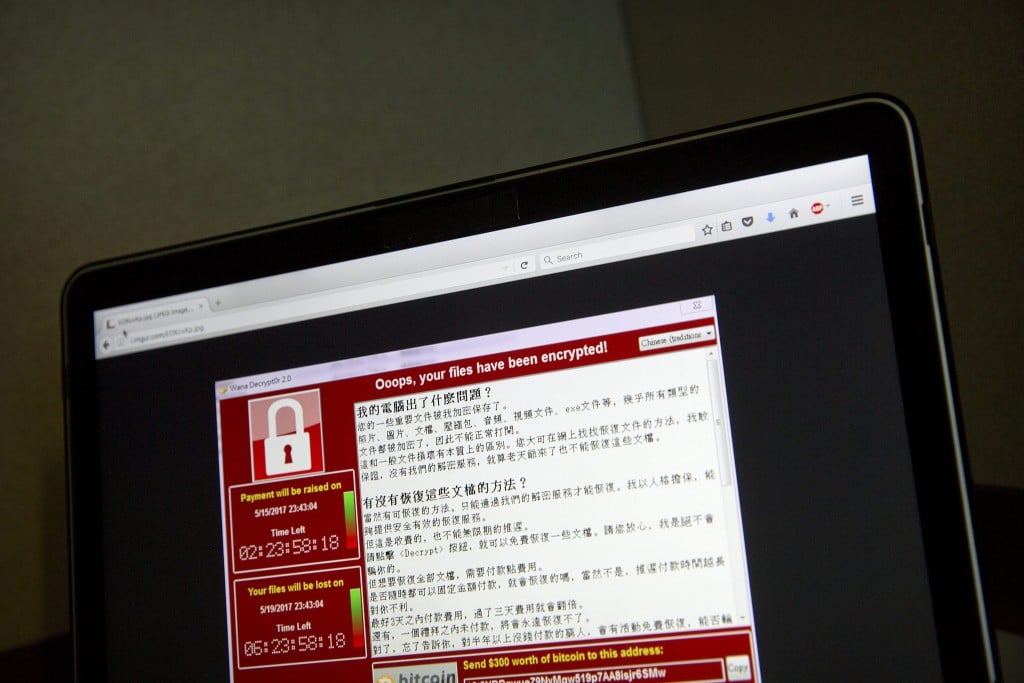 New variants of the rapidly replicating worm were discovered Sunday. One did not include the so-called kill switch that allowed researchers to interrupt the malware’s spread Friday by diverting it to a dead end on the internet.

Ryan Kalember, senior vice-president at Proofpoint Inc. which helped stop its spread, said the version without a kill switch could spread. It was benign because it contained a flaw that prevented it from taking over computers and demanding ransom to unlock files but other more malicious ones will likely pop up.

“We haven’t fully dodged this bullet at all until we’re patched against the vulnerability itself,” Kalember said.

The attack held users hostage by freezing their computers, popping up a red screen with the words, “Oops, your files have been encrypted!” and demanding money through online bitcoin payment – $300 at first, rising to $600 before it destroys files hours later.

Just one click on an infected attachment or bad link would lead to all computers in a network becoming infected, said Vikram Thakur, technical director of Symantec Security Response.

“That’s what makes this more troubling than ransomware was a week ago,” Thakur said.

The attack has hit more than 200,000 victims across the world since Friday and is seen as an “escalating threat,” said Rob Wainwright, the head of Europol, Europe’s policing agency.

“The numbers are still going up,” Wainwright said.

Microsoft’s top lawyer is laying some of the blame at the feet of the U.S. government. Brad Smith criticized U.S. intelligence agencies, including the CIA and National Security Agency, for “stockpiling” software code that can be used by hackers. Cybersecurity experts say the unknown hackers who launched this weekend’s “ransomware” attacks used a vulnerability that was exposed in NSA documents leaked online.

It was too early to say who was behind the onslaught, which struck 100,000 organizations, and what their motivation was, aside from the obvious demand for money. So far, not many people have paid the ransom demanded by the malware, Europol spokesman Jan Op Gen Oorth told The Associated Press.

Researchers who helped prevent the spread of the malware and cybersecurity firms worked around the clock over the weekend to monitor the situation and install the software patch.

“Right now, just about every IT department has been working all weekend rolling this out,” said Dan Wire, spokesman at Fireeye Security.

Microsoft distributed the patch two months ago, which could have forestalled much of the attack, but in many organizations it was likely lost among the blizzard of updates and patches that large corporations and governments strain to manage.