"If people want to keep things open, the only way to safely do that... is to do regular testing" 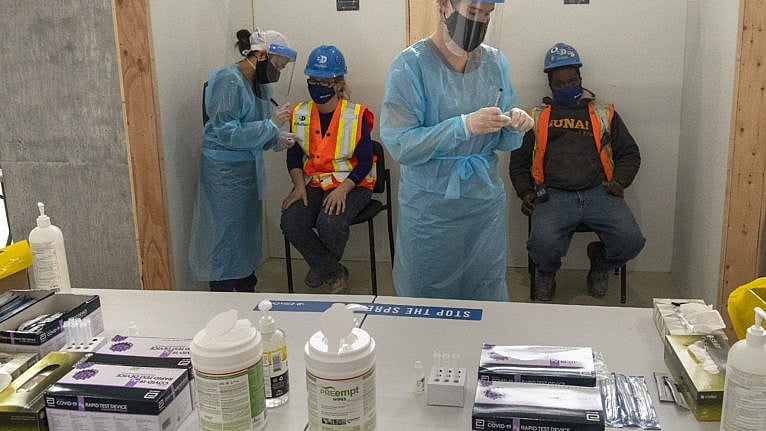 On Feb. 24, the Greater Toronto Airport Authority announced a 10-week rapid-test study of volunteers from among airport workers and passengers at Pearson Airport. Doing such a study in an airport means that its results may be applicable to other so-called “high-throughput” environments, including schools. The announcement comes after reports in recent weeks that the millions of rapid test kits shipped by Ottawa to the provinces in the past few months still haven’t been used. Ontario has millions of such tests in storage; other provinces are even farther behind. Recently, CBC News revealed that Alberta had used fewer than one per cent of the 1.9 million rapid tests it had received from Ottawa.

COVID-19 testing is down in Canada. In the past month, PCR testing, which averaged more than 90,000 tests a day in January, has declined to the point that Canada is now averaging less than 80,000 a day. And at a time when more infectious variants of concern are circulating, experts are urging for more testing, not less, so as to see how much virus is out there.

In particular, they want Canada to embrace rapid tests. Though less sensitive than the more common PCR test—rapid antigen tests give results in minutes compared to PCR tests, which can take up to a day or two for results, and this means they could provide another layer of protection.

“We are speaking of an infectious disease,” says Dr. David Juncker, a biomedical engineering professor at McGill University in Montreal. “Yet our testing is all about detecting infected people, as opposed to detecting infectious people.” He says rapid tests can “be more efficient at stopping the pandemic” by identifying asymptomatic or pre-symptomatic people early, while they are infectious.

To see the benefit, Juncker points to a famous case study: Last autumn, virtually the entire nation of Slovakia was tested two to three times in quick succession with rapid tests with some 50,000 tests coming back positive, meaning a positivity rate of around four per cent. A week after the tests were done, case loads dropped by 60 per cent.

Dr. Lisa Barrett also wants rapid testing to become far more ubiquitous in Canada. “It’s really, really important for people to associate lots of testing with keeping cases low,” says the infectious diseases researcher at Dalhousie University in Halifax who helped start Canada’s first rapid testing pop-up sites in late November. “Let’s all be clear: a) we’re not all vaccinated b) the vaccines may have different effectiveness in different populations and with different variants, but the testing works.

“I hope people will start to link high testing and high vaccines with keeping cases low. That’s a mind shift that’s not quite there,” she says, adding with emphasis, “[It’s] not to make cases low [that] you get tested, but to keep cases low.” That’s what Nova Scotia has been doing. In the past three months, those rapid testing clinics, which occur several times a week and are staffed largely by volunteers, have done 18,000 tests. Around 40 rapid tests came back positive, with 12 confirmed through PCR testing. (To put that in context, Nova Scotia has only reported 308 cases of COVID-19 since Dec. 1)

“If people want to keep things open [then] the only way to safely do that with a virus that spreads without symptoms is to do regular testing. Full stop,” Barrett explains. “Someone said, ‘Oh, I have to drag my kids in, and it will be all of us, once a week.’ And I said, ‘Yup, and if you’re going for groceries, go on the way, or the way back,’ [thus] making it that normal.”

Turning rapid tests from a medical issue into a habit to maintain one’s lifestyle is already happening in other countries. Juncker points to the example of Paris, where people can pop into a local pharmacy for a no-cost, no-wait rapid test. “People want to test,” he says, “The option to have a quick test around the corner and a quick answer is what people want, so why can’t we put it in their hands.” In the United States, some universities use rapid tests several times a week to test their students and staff. The same applies to businesses such as Goldman Sachs, which tests all staff who work in its offices at least twice a week.

Canada is starting to catch up. One of the four priority testing strategies identified by the COVID-19 Testing and Screening Expert Advisory Panel in January was “deploying rapid tests for screening.”

“We’ve been calling for rapid testing for some time,” says Trevin Stratton, chief economist at the Canadian Chamber of Commerce. It is “one of most important tools in the toolbox to mitigate the pandemic in that interim period” between economies reopening from restrictions and the point when enough of the population is vaccinated that cases stay down.

Recently, Ontario announced that it is scaling up its rapid testing programs to eventually deploy a million tests a week at sectors including essential workplaces, congregate settings and schools. It is in the process of sending hundreds of thousands to 160 worksites ranging from essential industries such as Ontario Power Generation to warehouses and mines.

Juncker, who is researching a sputum rapid test, thinks one reason for the sedate pace of Canada’s rollout of rapid tests is that a lot of the decision makers have health backgrounds that make them prefer ultra-sensitive, accurate tests, such as PCR ones, as opposed to the less sensitive rapid tests, which aren’t as likely to identify people with low viral loads, and also have a higher error rate. But in a pandemic, “it’s counterproductive because we know the infectious period is short,” so relying heavily on ultra-sensitive PCR tests means missing people who aren’t yet displaying symptoms, explains Juncker.

As Barrett says of rapid tests, “Sometimes a pandemic requires action without all the data, and you collect it as you go, and fix it as you go.”