RCMP employees who were sexually harassed to learn of compensation 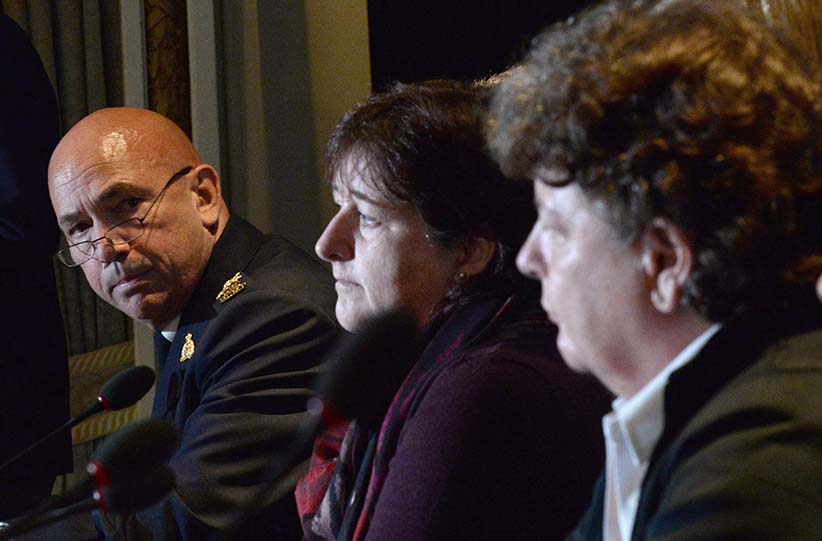 RCMP commissioner Bob Paulson, left, answers a question during a news conference, as plaintiffs Janet Merlo, centre, and Linda Davidson look on, in Ottawa Thursday, Oct. 6, 2016. Paulson has apologized to hundreds of current and former female officers and employees for alleged incidents of bullying, discrimination and harassment. (Adrian Wyld/CP )

TORONTO — Women who were sexually harassed as RCMP employees will soon receive letters letting them know they are eligible for compensation if, as expected, a judge certifies a class action against the police force.

Lawyers for the plaintiffs and government told Federal Court on Monday that certification will allow a publicity blitz to reach the affected women and set the stage for final settlement of the lawsuit.

“This is the only real way for the women to come forward,” Kim said.

McDonald said she would rule “very shortly” on granting the requested order certifying the class.

Among other things, the order would appoint former RCMP officers Janet Merlo and Linda Davidson as representative plaintiffs, and set a 60-day clock ticking on opting out of the class action.

The estimated 14,000 to 17,000 victims would also have an opportunity to comment on the proposed settlement before it is put to the courts for final approval, likely in the spring. Claimants would then have six months to make a claim.

Merlo, now of St. John’s, N.L., was an RCMP constable from 1991 to 2010. She suffered many negative health affects, including depression and panic attacks, due to her mistreatment, court heard. She began her claim in British Columbia in 2012.

Davidson, 58, now of Bracebridge, Ont., filed her suit in 2015 in Ontario. Starting in 1985, she became one of the few females to reach a commissioned officer’s rank. She was an inspector when she took medical leave in 2009, suffering from anxiety, depression and other health issues as a result of the sexual and gender-orientation harassment she had faced from colleagues and superiors. Davidson retired in 2012, more than a decade earlier than she had planned, court heard.

“The representative plaintiffs allege, on behalf of the class, that the defendant was negligent and violated their (charter) rights,” the draft order put to McDonald states.

In May last year, the two sides reached a tentative agreement to compensate women who experienced workplace sexual harassment or gender-based discrimination while working for the RCMP as police officers or civilians from 1974 on. Details were announced in October, when Commissioner Bob Paulson apologized for having failed the women.

The high profile announcement prompted a flurry of interest from RCMP members, many of them long retired, Kim told McDonald.

“We have received hundreds of calls from women across the country,” said Kim, who represents Davidson.

The proposed settlement, which would be administered by retired Supreme Court of Canada justice Michel Bastarache, creates six categories of claimants. Those who suffered the most egregious abuse would be eligible for up to $220,000. In some cases, family members of the RCMP employees would also be eligible for cash.

The lawyers also asked McDonald to approve their cut — 15 per cent — of the payout. The government has already agreed to pay them $12 million.

A lawyer for the federal government, which is not opposing the certification, said on Monday that Ottawa has “conceded that there is prima facie a cause of action” but was otherwise making no admissions.

In addition to providing compensation, the RCMP has also agreed to address systemic issues of gender-based harassment and discrimination.