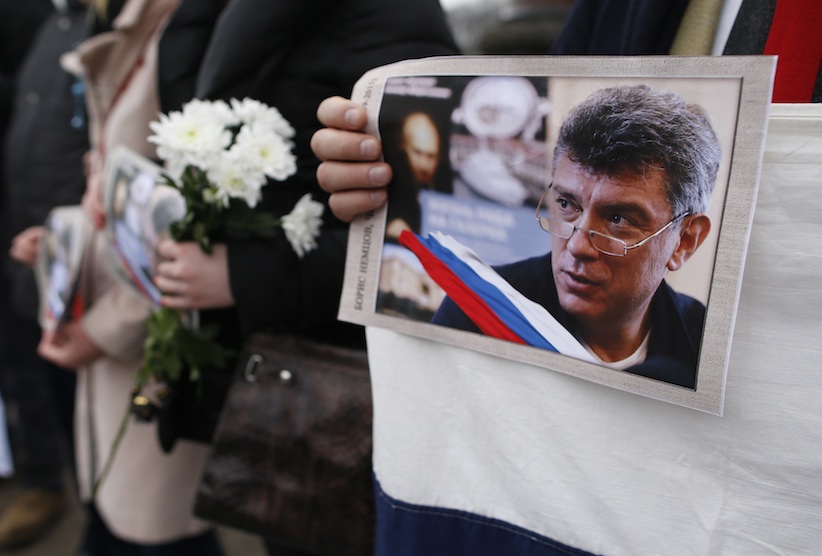 Ilya Yashin said he had “no doubt” that Chechen leader Ramzan Kadyrov was behind the killing of Russian opposition leader Boris Nemtsov, who was shot dead on Feb. 27, 2015, outside the Kremlin in Moscow.

Yashin said he was sure the suspected triggerman, an officer in Kadyrov’s security force, and his alleged accomplices wouldn’t have acted without Kadyrov’s approval. Kadyrov has denied the accusations and the official probe has failed to identify the mastermind.

The Chechen leader posted a link to Yashin’s report on his Instagram account, where he has 1.7 million followers, and other social networks hours before its official release, dismissing it as “chatter.”

Yashin’s speech was interrupted by a bomb threat and police moved to clear the hall. An unidentified protester threw replica U.S. dollars at Yashin, suggesting perceived U.S. support for the Russian opposition.

In his report, Yashin accused Kadyrov of misappropriating generous federal subsidies to Chechnya to enrich himself and his loyalists and relying on a personal army of 30,000 to enforce his rule.

“Chechnya has become a separate state within the Russian state,” Yashin said. “Kadyrov effectively rejects the federal law and ignores the Russian constitution.”

President Vladimir Putin has relied on Kadyrov to stabilize the region in Russia’s North Caucasus after two separatist wars. The gruff 39-year old has succeeded his father, the former rebel who switched sides to become Chechnya’s first Moscow-backed leader before dying in a rebel bombing in 2004.

Kadyrov has used personal ties with Putin to ensure a steady flow of federal funds and effective immunity from federal controls. His unparalleled clout angered leaders of Russia’s powerful law enforcement agencies, who have pushed for Kadyrov’s dismissal.

The killing of Nemtsov, who was shot dead while walking across a bridge outside the Kremlin, reportedly made Putin mad and encouraged Kadyrov’s foes.

Tensions around Kadyrov heightened in recent weeks when he launched scathing criticism of Russian opposition leaders. With Kadyrov’s term set to expire in early April, some observers saw his statements as an attempt to secure Putin’s support for keeping the job.

Yashin strongly called for Kadyrov’s ouster, describing his regime as a “threat to national security.”

“Vladimir Putin has placed a time bomb in the North Caucasus that may blow up in case of any serious political crisis and turn into a third Chechen war,” he said.