Shoal Lake 40, situated on an island, has been under a boil advisory for 18 years 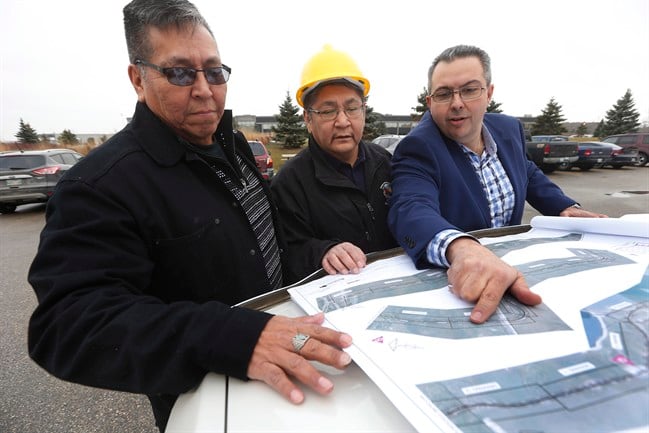 From left, Daryl Redsky, consultation officer, Chief Erwin Redsky, both of Shoal Lake 40 First Nation, and Phil Cesario, design project manager at PM Associates Ltd. go over the final design drawings for Freedom Road, an all-weather road which will connect the reserve to the Trans Canada highway, in Winnipeg on Friday, November 25, 2016. THE CANADIAN PRESS/John Woods

WINNIPEG – An isolated reserve near the Manitoba-Ontario boundary has cleared what might be the last major hurdle to getting a much-needed road to connect the community to the outside world and secure safe tap water and other infrastructure.

Officials with Shoal Lake 40 First Nation received final design plans Friday for a 24-kilometre, all-weather road along with a projected price – $33 million – that is much lower than recent estimates.

“We’ve been looking forward to this day for some time,” Chief Erwin Redsky said.

Shoal Lake 40 residents were moved off their land onto a peninsula a century ago during construction of an aqueduct which sends fresh water to Winnipeg. Construction created a man-made island and cut them off from the mainland.

While water still flows to the Manitoba capital, the reserve has been under a boil advisory for 18 years.

Residents have had to make do with an aging ferry prone to breakdowns and use a treacherous ice road in winter. Some people have died trying to cross the ice.

The all-weather road, which would include two bridges, would make it feasible to bring in reasonably priced equipment to build a water treatment plant and other projects.

The federal and Manitoba governments, along with the City of Winnipeg, agreed last year to jointly pay for the road which had been estimated in 2011 to cost $30 million. But the projected costs climbed to near $50 million as preliminary work began.

The price tag has been brought back down thanks to some trimming and minor rerouting.

“We narrowed the road slightly … and we changed some minor road alignments, some curves, just so that we didn’t have to maybe blast quite as much rock, fill in so many valleys or blast out some of the hills,” said Phil Cesario, an engineer and project manager for the design phase.

The rising cost estimate had raised doubts about the project.

Manitoba Premier Brian Pallister has repeatedly indicated his government is committed to the project, and said it would likely get started this winter. But he also said earlier this month negotiations on financing were still underway. Different parts of the projects are on federal, municipal and provincial Crown land.

The province’s minister of infrastructure, Blaine Pedersen, said Friday the lower price tag excludes some items and talks are still not finalized.

“The $33-million estimate … does not include costs related to project management, engineering, bridge design or bridge construction, all of which are vital to the project and contribute to its total cost,” Pedersen said in a statement.

“Our government remains committed to building the Shoal Lake Road project and continues to work with the First Nation, the federal government, and the City of Winnipeg.”

Pedersen posted a photograph on social media earlier this month of two surveyors on the project, along with the caption: “Exciting times. Road getting built FINALLY.”

Construction is expected to start within three months after final details are worked out. The environmental submission has gone in for review and consultation with residents of other communities near the road is underway, said Cesario.

“We’re hopeful that that could be completed … early in the new year and construction could start.”