Russia must choose between Assad and the U.S., says Tillerson

U.S. Secretary of State issues ultimatum to Russia after meeting with G7 nations 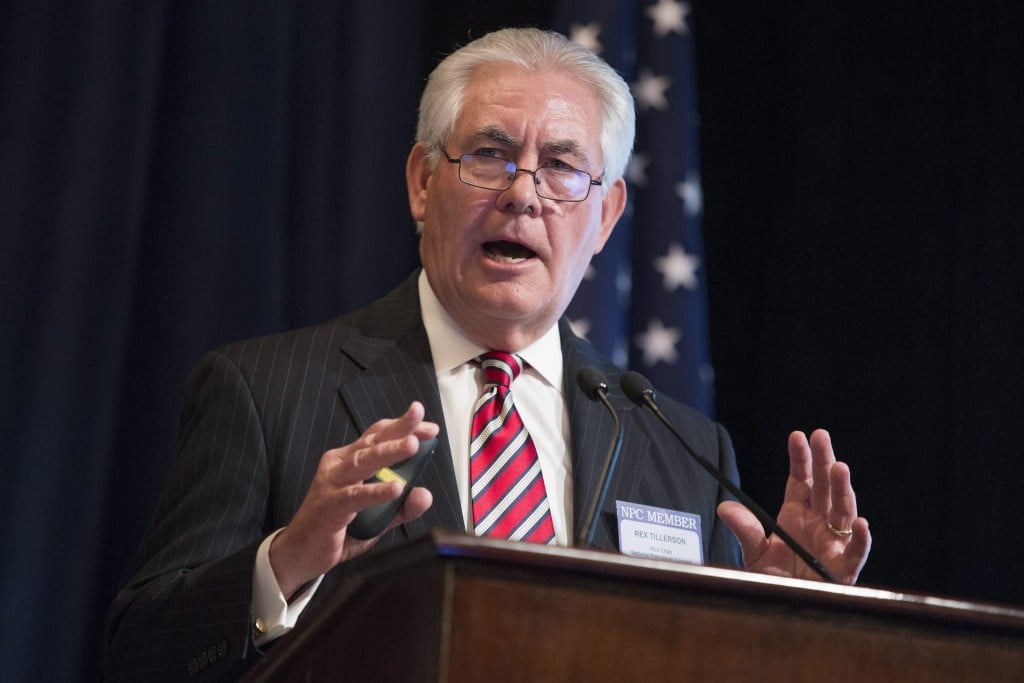 LUCCA, Italy – U.S. Secretary of State Rex Tillerson issued an ultimatum to Russia on Tuesday: Side with the U.S. and likeminded countries on Syria, or embrace Iran, militant group Hezbollah and embattled Syrian leader Bashar Assad.

As he embarked on a trip to Moscow following urgent meetings in Italy with top diplomats, Tillerson said it was unclear whether Russia had failed to take seriously its obligation to rid Syria of chemical weapons, or had merely been incompetent. But he said the distinction “doesn’t much matter to the dead.”

“We cannot let this happen again,” the secretary of state said.

“We want to relieve the suffering of the Syrian people. Russia can be a part of that future and play an important role,” Tillerson added in remarks to reporters. “Or Russia can maintain its alliance with this group, which we believe is not going to serve Russia’s interests longer term.”

Since the U.S. launched airstrikes against Assad’s forces in retaliation for a chemical attack on civilians last week, Trump administration officials have offered mixed messages about whether Washington believes Assad definitely must surrender power – and when. Tillerson said it was clear the U.S. saw no role for Assad in Syria’s future, given that he had lost legitimacy.

“It is clear to all of us that the reign of the Assad family is coming to an end,” he said. “But the question of how that ends and the transition itself could be very important in our view to the durability, the stability inside of a unified Syria.”

“That’s why we are not presupposing how that occurs,” Tillerson added.

He said the cease-fire talks that Russia and Iran have helped broker in the Kazakh capital, Astana, could generate momentum toward broader talks about a political transition – if the Astana talks succeed in creating a durable cease-fire. The resulting political talks would take place under the auspices of the United Nations process in Geneva.

“To date, Astana has not achieved much progress,” Tillerson said.

Tillerson spoke after a meeting of the “likeminded” countries was hastily arranged on the sidelines of the summit of the Group of Seven industrialized economies in Italy, days after the U.S. for the first time launched airstrikes against Assad’s forces.

A key focus since the chemical attack has been on increasing pressure on Russia, Assad’s strongest ally, which has used its own military to keep Assad in power. The U.S. and others have said that Russia bears responsibility for the deaths of civilians at the hands of Assad given Moscow’s role in guaranteeing the 2013 deal in which Assad was supposed to have given up his chemical weapons arsenal.

The U.S. raised the stakes significantly on Monday when a senior U.S. official said Washington has made a preliminary conclusion that Russia knew in advance of Syria’s chemical weapons attack. Yet the U.S. has no proof of Moscow’s involvement, said the official, who wasn’t authorized to speak publicly on intelligence matters and demanded anonymity.

That accusation will hang over Tillerson’s visit to Moscow, where he plans with meet with Russia’s foreign minister, Sergey Lavrov, and possibly with Russian President Vladimir Putin. The Kremlin declined to say whether Putin would meet with Tillerson, in line with its usual practice of not announcing such meetings ahead of time.

OPINION: Our day of reckoning for Syria is coming

The United States has sought to minimize expectations for the trip or the likelihood that the U.S. will leave with any concessions from Russia regarding its support for Assad. Instead, the U.S. is hoping to use the visit – the first by a Trump Cabinet official to Russia – to convey its expectations to Moscow and then allow the Russians a period of time to respond.

Though intended to punish Assad for a chemical weapons attack, the U.S. strikes last week served to refocus the world’s attention on the bloody war in Syria, now in its seventh year. Diplomats gathered in Italy as U.S. officials in Washington floated the possibility of new sanctions on the Syrian and Russian military, plus the threat of additional U.S. military action if Assad’s government continues attacking civilians.

At Tuesday’s meeting in the walled Tuscan city of Lucca, the G-7 countries were joined by diplomats from Muslim-majority nations including Jordan, Qatar, Saudi Arabia, Turkey and the United Arab Emirates. The inclusion of those countries is important because the U.S. strategy for Syria involves enlisting help from Mideast nations to ensure security and stability in Syria after the Islamic State group is vanquished.