B.C. wildfires: The race to save farm animals from the flames

People are risking life and limb to safeguard livestock, which are an economic engine in central B.C. 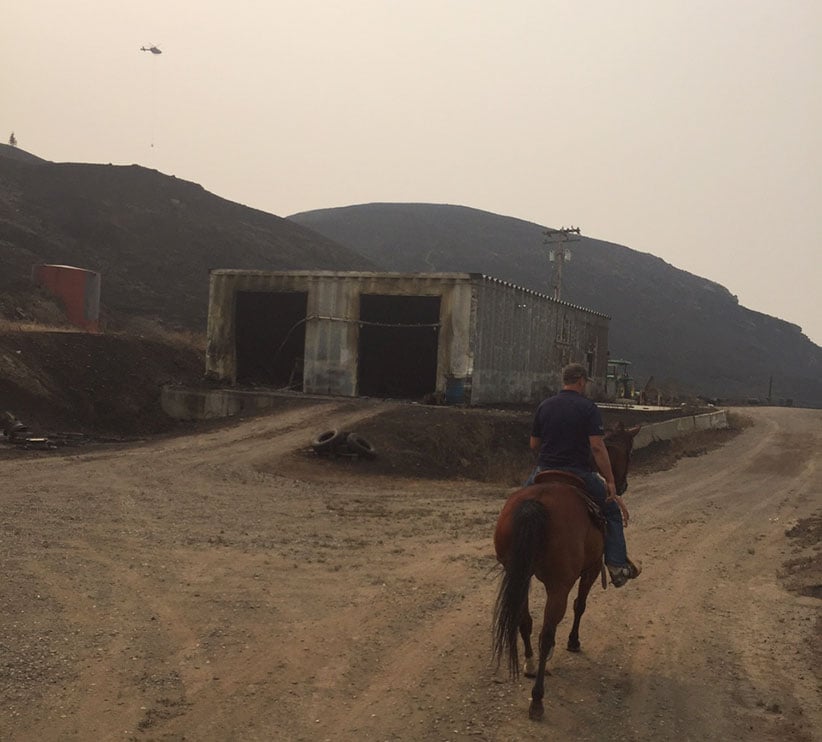 By moonlight, Rob Donaldson and his neighbours ran 1,000 cows down the alleyways of a burning barn. They parked a tractor with shining headlights to help them see. They first loaded the calves into a cattle-hauling truck, then the adults in groups of 40, in 40 degree heat. The dairy cows had ballooning udders. Two suffered severe burns. Three family favourites wandered back into the barn and died, while the multi-million dollar facility burned to the ground. Donaldson himself rushed into the smoke to herd the survivors to safety.

“He was maybe too heroic,” says Quinn Gavaga, the veterinarian who helped evacuate the barn near Ashcroft, B.C., a scramble so hectic that his cell phone got trampled. “There’ll be more sick people that helped the cattle than there are sick cattle.” Home to about 62,000 people, the Cariboo region of B.C. also has more than 20,000 head of cattle, which are an economic base for some communities (Ashcroft lies just south of the Cariboo). Amid wildfires, farmers panic to evacuate their animals, veterinarians treat burns and neighbours endure lung injuries for the sake of saving each other’s stock. Between animals, machinery and flammable crops, the stakes for farmers are high.

“Animals just don’t know what to do,” says Gavaga. “They’ll run onto the hot embers and burn their feet off.” Even pigs, renowned for their intelligence, will walk straight into flaming shelters. “That’s their home,” says Gavaga. “They don’t really differentiate whether it’s burning or not.” Aside from suffering heat stress, the dairy cows were so full of milk they risked straining the ligaments in their udders. Donaldson needed to find a site to bring 800 cattle and 200 dairy cows—in the middle of the night—equipped for immediate milking.

RELATED: How you can help those affected by the B.C. wildfires

To complicate the lodging: Donaldson’s cow produce organic milk. They needed to go to another organic farm or else their milk and meat would lose organic certification, and Donaldson would endure even more financial losses. Luckily, his family had other farms about a three-hour drive away in the Fraser Valley and Bradner, where the veterinarian injected the burned cows with antibiotics. Donaldson and some of his helpers had inhaled so much smoke themselves, they were vomiting and struggling to breathe, his sister-in-law, Pamela Krause, recalls. They went to the hospital in Kamloops to be administered oxygen.

Other farmers in Ashcroft still haven’t left their farms. “This is my livelihood here,” says Jordan Krause, Donaldson’s brother-in-law. “They’re not arresting me for staying home,” he says, “I can’t just walk away from what I got going on here.” Age 29, he has a wife and three kids. His family left the farm when they got the evacuation notice on Saturday, but Krause says, “I’m a young guy and plan on being here forever.”

Since Krause’s cows are grazing in pasture, he has cut the fences and opened gates so they can run from fire if needed—a method called “sheltering in place.” Since the region has no electricity, nearby farmer Greg Van Winkle makes four to five trips per day to haul 7,000 gallons of river water to hydrate his cattle. On Saturday, police showed up at the farm of Travis and Robyn Gardner. “The cop told us, ‘you have five minutes to grab as many animals as you can,'” says Travis via Facebook. Travis didn’t have insurance on his truck and one trailer, but he recalls the cop saying, “I don’t care, just get out of here!” The couple loaded two horses, a pony, lamb, pigs, dogs and cats. They left behind 167 chickens, eight pigs and two small cows, as well as barn cats.

RELATED: How many fires are burning in B.C., and other FAQs

The B.C. Ministry of Agriculture estimates there are 20,800 cattle living on crown land in the fire-affected areas, plus another two to three thousand living on private land. But as an even greater financial loss than the animals, farmers have lost their grazing fields for several years, as well as their fences. The Ministry says it’s working with municipal governments to prepare farmers for future emergencies. “It is front and centre with the Ministry of Agriculture as an area that we put lots of time and effort into,” says Brent Barclay, manager for regional development for the Ministry. Chris Porter, owner of Desert Hill farms in Ashcroft, estimates a loss of $20,000 after the fire burned through his field of green bell peppers.

Cattle usually travel in specific groups to prevent spread of disease, and bulls are usually separated to prevent fights, but Cariboo farmers are desperately asking via social media for any transportation help. “Given that this is a survival issue, you’d have to put concerns of biosecurity a little bit back on the list,” says Rob McNabb, general manager of the Canadian Cattlemen’s Association. McNabb has seen farmers so dedicated to their herds during natural disasters, they’ve put their cattle on barges or herded them by swimming through floods. “I could certainly understand that human life takes priority, but I suspect there are some who would reverse the priority.”

Donaldson’s cattle may suffer long-term affects, including respiratory pneumonia or pregnancy-loss from stress. If he doesn’t water his fields within a week, his crops will die. Nearby, three nights after the barn fire, his brother-in-law is still trying to salvage his own fields. “It’s insane out here. It’s like a war zone,” says Krause. “At nighttime, it’s just an eerie glow.”

Correction, July 12: An earlier version of this article misidentified the farmer making four to five trips to the river each day to haul water as Tyler Goold. In fact, the farmer hauling the water was Greg Van Winkle.