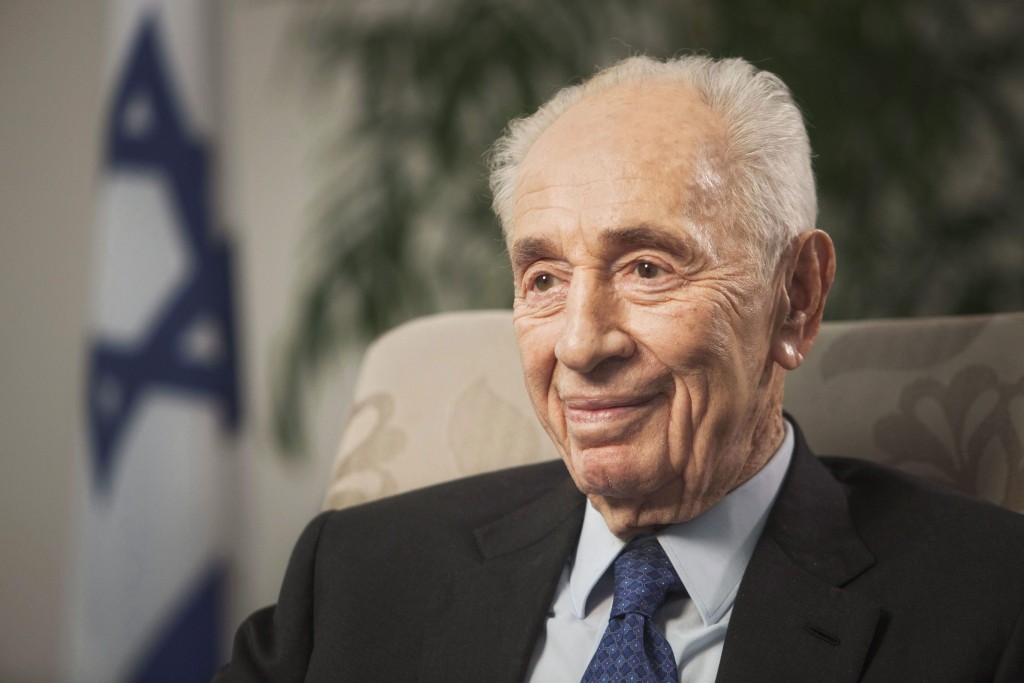 JERUSALEM — Israel on Wednesday mourned the death of Shimon Peres, a former president and prime minister whose life story mirrored that of the Jewish state, as the government began preparations for a funeral that is expected to bring together an array of world leaders and international dignitaries.

Peres, celebrated around the world as a Nobel Prize-winning visionary who pushed his country toward peace during a remarkable seven-decade career, died early Wednesday from complications from a stroke. He was 93.

His son, Chemi, confirmed his death Wednesday morning to reporters gathered at the hospital where Shimon Peres had been treated for the past two weeks.

Peres’ condition worsened following a major stroke two weeks ago that led to bleeding in his brain. He was sedated and on a respirator during most of his hospitalization.

“Today with deep sorrow we bid farewell to our beloved father, the ninth president of Israel,” Chemi Peres said.

“Our father’s legacy has always been to look to tomorrow. We were privileged to be part of his private family, but today we sense that the entire nation of Israel and the global community share this great loss. We share this pain together.”

Prime Minister Benjamin Netanyahu hailed Peres as a “man of vision” and convened his Cabinet for a special meeting.

“As a man of security, he fortified Israel’s strength in many ways, some of which even today are still unknown,” he said. “As a man of peace, he worked until his final days toward reconciling with our neighbours for a better future for our children.”

Officials said that Peres’ body would lie in state at the Knesset, or parliament, on Thursday to allow the public to pay final respects. His funeral was set for Friday at Mount Herzl, the country’s national cemetery in Jerusalem. Yona Bartal, a former personal aide to Peres, said the arrangements were in line with his wishes.

As word of Peres’ death spread, reaction started pouring in from around the globe.

“Shimon Peres was, above all, a man of peace and a man dedicated to the well-being of the Jewish people,” said Prime Minister Justin Trudeau in a statement late Tuesday.

“Over the course of his long and distinguished life, Mr. Peres made enormous contributions to the founding and building of the State of Israel. He was devoted to promoting understanding between his country and its neighbours, and shared a Nobel Peace Prize for his efforts to create peace in the Middle East.”

Trudeau added that Peres was a “great friend to Canada” who visited often and “helped build relations that remain strong to this day.”

Gov. Gen. David Johnston said in a statement that Peres “meant so much to Israel, to Jewish people in Canada and around the world.”

“He will be missed and remembered by all those whose lives he has touched.”

Former prime minister Stephen Harper posted a message on Twitter saying he and his wife, Laureen, “are saddened to learn of the passing of dear friend Shimon Peres.” Harper offered “sincere condolences to the Peres family and to the people of Israel.

Former foreign affairs minister John Baird also expressed his condolences on Twitter, calling Peres a “wonderful human being” and that the world has lost a great statesman and that both he and Canada “have lost a friend.”

“Few have accomplished more for the advancement of Israel and the Jewish people than Shimon Peres,” said interim Conservative Leader Rona Ambrose in a statement.

“He was a man who was the architect of Israel’s robust defence strategy, and someone who also won the Nobel Peace Prize in an attempt to find peace with the Palestinian people.”

Added U.S. President Barack Obama: “There are few people who we share this world with, who change the course of human history, not just through their role in human events, but because they expand our moral imagination and force us to expect more of ourselves. My friend Shimon was one of those people.”

Trudeau and Obama will be among several leaders expected at Peres’ funeral in Jerusalem on Friday. Israel’s Foreign Ministry said Bill and Hillary Clinton, Britain’s Prince Charles and French President Francois Hollande along with senior officials from Germany, Mexico, Australia and elsewhere, would also attend. It will be the biggest gathering of international leaders to converge on Israel since the funeral of Yitzhak Rabin, who was assassinated by a Jewish ultranationalist in 1995.

The Vatican said Pope Francis will not attend the funeral after the Foreign Ministry earlier said the Pope would attend.

Obama, who awarded Peres the Presidential Medal of Freedom in 2012, eulogized Peres as a man who represented “the essence of Israel itself.”

Bill Clinton and Democratic presidential nominee Hillary Clinton said they “lost a true and treasured friend.” Clinton was president when Peres negotiated a historic interim peace agreement with the Palestinians in 1993. Peres shared the Nobel Peace Prize the following year.

While Western leaders eulogized Peres, the Palestinians remained conspicuously silent. On one hand, the Palestinians appreciated Peres’ commitment to peace. But he was also controversial for overseeing a war in Lebanon while he was prime minister in 1996 in which dozens of civilians were killed in an Israeli artillery strike. Peres, like other Israeli leaders, also allowed settlement construction to take place during his years in leadership positions.

Peres, a Nobel Peace Prize laureate, is the elder statesman of Israeli politics, one of the country’s most admired leaders and the last surviving link to its founding fathers.

All of Israel’s TV and radio stations devoted their programs to Peres’ passing, playing sad music and interviewing friends, commentators and former officials who paid tribute to him.

In an unprecedented seven-decade political career, Peres filled nearly every position in Israeli public life and was credited with leading the country through some of its most defining moments, from creating its nuclear arsenal in the 1950s, to disentangling its troops from Lebanon and rescuing its economy from triple-digit inflation in the 1980s, to guiding a skeptical nation into peace talks with the Palestinians in the 1990s.

A protege of Israel’s founding father David Ben-Gurion, he led the Defence Ministry in his 20s and spearheaded the development of Israel’s nuclear program. He was first elected to parliament in 1959 and later held every major Cabinet post — including defence, finance and foreign affairs — and served three brief stints as prime minister. His key role in the first Israeli-Palestinian peace accord earned him a Nobel Peace Prize and revered status as Israel’s then most recognizable figure abroad.

And yet, for much of his political career he could not parlay his international prestige into success in Israeli politics, where he was branded by many as both a utopian dreamer and political schemer. His well-tailored, necktied appearance and swept-back grey hair seemed to separate him from his more informal countrymen. He suffered a string of electoral defeats: competing in five general elections seeking the prime minister’s spot, he lost four and tied one.

He finally secured the public adoration that had long eluded him when he has chosen by parliament to a seven-year term as Israel’s ceremonial president in 2007, taking the role of elder statesman.

Peres was celebrated by doves and vilified by hawks for advocating far-reaching Israeli compromises for peace even before he negotiated the first interim accord with the Palestinians in 1993 that set into motion a partition plan that gave them limited self-rule. That was followed by a peace accord with neighbouring Jordan. But after a fateful six-month period in 1995-96 that included Prime Minister Yitzhak Rabin’s assassination, a spate of Palestinian suicide bombings and Peres’ own election loss to the more conservative Benjamin Netanyahu, the prospects for peace began to evaporate.

Relegated to the political wilderness, he created his non-governmental Peres Center for Peace that raised funds for co-operation and development projects involving Israel, the Palestinians and Arab nations. He returned to it at age 91 when he completed his term as president.

Shimon Perski was born on Aug. 2, 1923, in Vishneva, then part of Poland. He moved to pre-state Palestine in 1934 with his immediate family. Her grandfather and other relatives stayed behind and perished in the Holocaust. Rising quickly through Labor Party ranks, he became a top aide to Ben-Gurion, Israel’s first prime minister and a man Peres once called “the greatest Jew of our time.”

At 29, he was the youngest person to serve as director of Israel’s Defence Ministry, and is credited with arming Israel’s military almost from scratch. Yet throughout his political career, he suffered from the fact that he never wore an army uniform or fought in a war.

Of his 10 books, several amplified his vision of a “new Middle East” where there was peaceful economic and cultural co-operation among all the nations of the region.

Despite continued waves of violence that pushed the Israeli political map to the right, the concept of a Palestinian state next to Israel became mainstream Israeli policy many years after Peres advocated it.

In 2000, Peres absorbed another resounding political slap, losing an election in the parliament for the largely ceremonial post of president to Likud Party backbencher Moshe Katsav, who was later convicted and imprisoned for rape.

Even so, Peres refused to quit. In 2001, at age 77, he took the post of foreign minister in the government of national unity set up by Ariel Sharon, serving for 20 months before Labor withdrew from the coalition.

Then he followed Sharon into a new party, Kadima, serving as vice-premier under Sharon and his successor, Ehud Olmert, before assuming the presidency.