Skater Patrick Chan on settling for silver: 'I think I'll be crushed when I go home'

Chan wins Canada's 11th medal in Sochi, though it's not the one he wanted 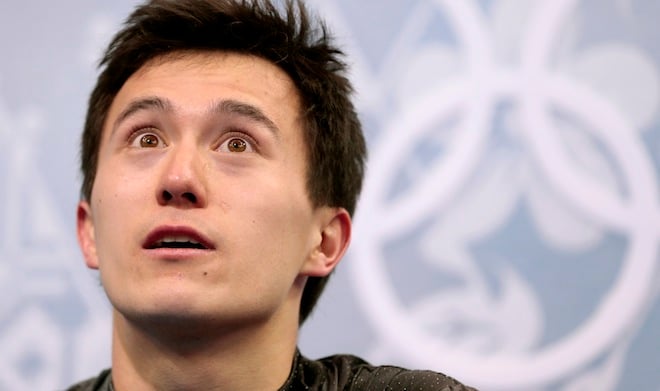 The mask slipped for only a minute. Standing on the second step of the men’s figure skating podium, Patrick Chan looked up at Yuzuru Hanyu of Japan, and his smile dimmed, then it disappeared altogether.

For the past four years, the 23-year-old Torontonian has been the best skater on the planet, winning three world championships and consistently capturing the top prizes on the Grand Prix circuit. But since his fifth place finish in Vancouver, he has never been shy about declaring Olympic gold to be his ultimate goal.

“No one can take that away from me,” Chan said as he ran the gauntlet of international media, post-competition. “No one can take away that I’ve had an amazing journey as a figure skater. I’m a three time world champion, two time silver medalist.”

And although he says that’s enough, you can tell he doesn’t really believe it. No one does.

That’s because on a night when it wouldn’t have taken his best—or even his average—skate to be crowned Olympic men’s champion, Chan fell short. And in the most painful way possible.

Hanyu, the 19-year-old Japanese phenom had left the door wide open, falling on his opening quad, and again on his triple flip, then stepping out of his final jump of the evening. His score of 178.64 for the long program, was 18-points shy of the season’s best marks Chan earned while winning the Trophée Eric Bombard in Paris in November.

But after nailing his most difficult jumps, a quad, and a quad toeloop, triple toeloop, combo, Chan saw his own free skate go sideways. He stumbled on landings, dropped elements, wobbled in his spins and generally fought and clawed just to make it through to the end. Falling to one knee, he smiled, but not out of elation. “I was just relieved to know it was over and I didn’t fall on my bum,” he said. Chan’s score was 178.10. Second place.

Brian Orser, himself the winner of silver medals for Canada in Sarajevo and Calgary, and now Hanyu’s coach, described it as just one of those nights. “I wanted everyone to skate well,” he said. “But there was something missing. The magic didn’t happen.” He said he wished he could give Patrick a hug. “I absolutely feel for him. It’s bitter sweet.”

In the coming days, there will be much talk of the “Canadian curse.” Chan is now the fourth Canuck—along with Orser, Kurt Browning, and Elvis Stojko—to fail to convert a world championship into an Olympic one. But they are hardly unique. In all 14 different world champs, from many different nations, have suffered the same fate.

Chan talked about how unfair the expectations are. The hype and media attention that elevates that one competition with the five rings above all the others. “You can’t define an athlete because of one day,” he said. “I’ve stood on the top of the podium many, many times in my career. Just because I stood to one side today, doesn’t mean I don’t believe I’m still the best in the world.” Maybe it would be different, he joked, if the Olympics were held every year—in March, just like the worlds.

But behind the brave—and true—words, there was disappointment. A feeling that he acknowledged, he was doing his very best to keep for himself, and for later.

“I think I’ll be crushed when I go home,” said Chan. “At the end of the day when I hold two silver medals in my hands and can really talk to myself and realize that I had that chance, I had that gold medal in front of me. It’s tough.”

Throughout these Olympics, the seven-time Canadian champion has been dropping not-too-subtle hints that this is his last Olympics. Four years from now, in Pyeongchang, he would be 27—long in the tooth for what has become a young man’s sport.

If Chan does decide to retire—now or after trying for a fourth world title next month—he will be remembered as one of figure skating’s all-time greats. A complete package, who could hit the hardest jumps, yet was even more technically and artistically sound. He will not be defined by a single loss.

An Olympic silver medal is a great accomplishment. Two, even more so. But the simple truth is they are not the colour Patrick Chan wanted. There is no mystery.