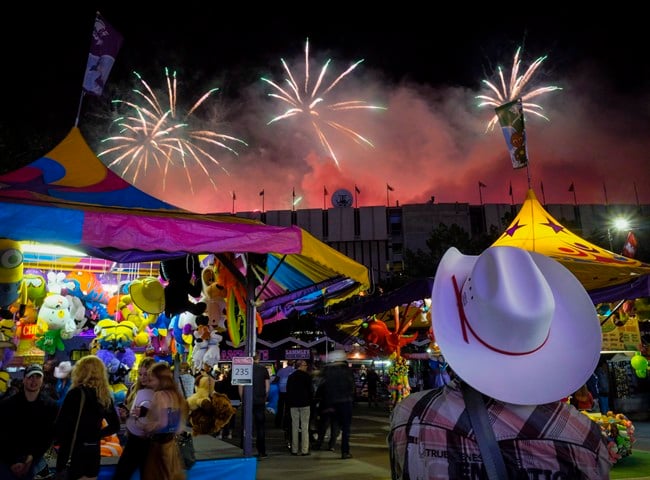 A visitor watches the fireworks display from the midway at the Calgary Stampede in Calgary, Saturday, July 9, 2016. THE CANADIAN PRESS/Jeff McIntosh

CALGARY – Michael Werbisky fondly remembers getting the shaft at the posh Hyatt Regency Hotel during the Calgary Stampede about 10 years ago.

The owner of Western Decor and Displays says he won a $50,000 contract to build an old-fashioned gold mine shaft in a hallway for a law firm’s Stampede party, along with a saloon set and other rustic decorations.

“We had it all done up in black material and the posts were done in rough wood and knee braces and so on, old-fashioned lanterns, a wooden walkway, so that when people entered the party they were coming through the mine shaft,” he said.

Over the years, Werbisky said his company has supplied horse-mounted cowboy greeters, hay rides and clowns to Stampede parties, but a side effect of the current economic weakness in Calgary is a dearth of imaginative ways to spend dwindling corporate entertainment budgets.

“Nothing outrageous recently,” he said ruefully. “We’re certainly hoping for the outrageous to come back.”

The Stampede, which kicks off with a parade on July 7, is a time when the Calgary-based oilpatch puts on its cowboy boots and hosts pancake breakfasts, beer-soaked barbecues and corporate boxes at the rodeo and chuckwagon races.

The 10-day celebration is considered a barometer of the health of the energy industry and spending expectations are low this year with benchmark oil prices recently at or below US$45 per barrel.

The financial mood has already hit the Stampede itself. At the chuckwagon canvas auction in March, bidders pledged $2.4 million to sponsor 36 racing teams, a notch above the $2.3 million pledged in 2015, but a far cry from the record $4 million in 2012 when oil fetched more than double the current prices.

Stampede spokesman Larry Lalonde said about 3,500 temporary employees have been added to 1,500 permanent staff, about the same as in 2016. Ticket sales and corporate sponsorships are also matching last year’s pace.

This year will see the return of investment firm Peters & Co.’s Firewater Friday party, one of the most prestigious invitation-only corporate parties that was cancelled last year. However FirstEnergy Capital’s FirstRowdy, which was also cancelled in 2016, isn’t making a comeback.

Corporations that kept their events going last year say they will party again this year while keeping a close eye on costs.

“There is a bit more optimism this summer than last,” he said, adding he considered cancelling the 2016 event because so many companies, including his own, had been forced to cut jobs and wages to cope with low oil prices.

The 30-year-old “Best Damn Stampede Party” is also set to go ahead in a gigantic tent at Cowboy’s Casino in downtown Calgary, says organizer Rob Laidlaw, despite failing to sell out last year for the first time in many years. Money raised from ticket sales are donated to charity.

“Last summer was probably the absolute bottom of the cycle as far as people’s feelings and peoples’ jobs. The area was down and out,” said Laidlaw, an investment adviser.

“What I’ve seen in almost the year since then was, with hills and valleys, certainly a comeback in people’s emotions.”

The financial health of Calgary’s hotel sector has also gone from the best in Canada to near the bottom over the past three years, said Dave Kaiser, CEO of the Alberta Hotel & Lodging Association, with an average hotel room rate down 14 per cent and the occupancy rate off 23 per cent compared with early 2014.

He said Stampede is expected to provide welcome relief for his members.

At the Hyatt, all the rooms are expected to be occupied as usual for the entire Stampede, said sales and marketing manager Meredith MacLean, although she added catering jobs are down from last year and there are fewer group bookings this year.

But Jason Oh, front office manager at Hotel Blackfoot, said the hotel about five kilometres south of the Stampede grounds was only 85 per cent booked with 10 days to parade day despite a room rate discount introduced this year. It had sold all of its rooms weeks ahead of Stampede in 2013 and 2014.

“It’s filling up, but the pace is fairly slow compared to before the recession,” said Oh.