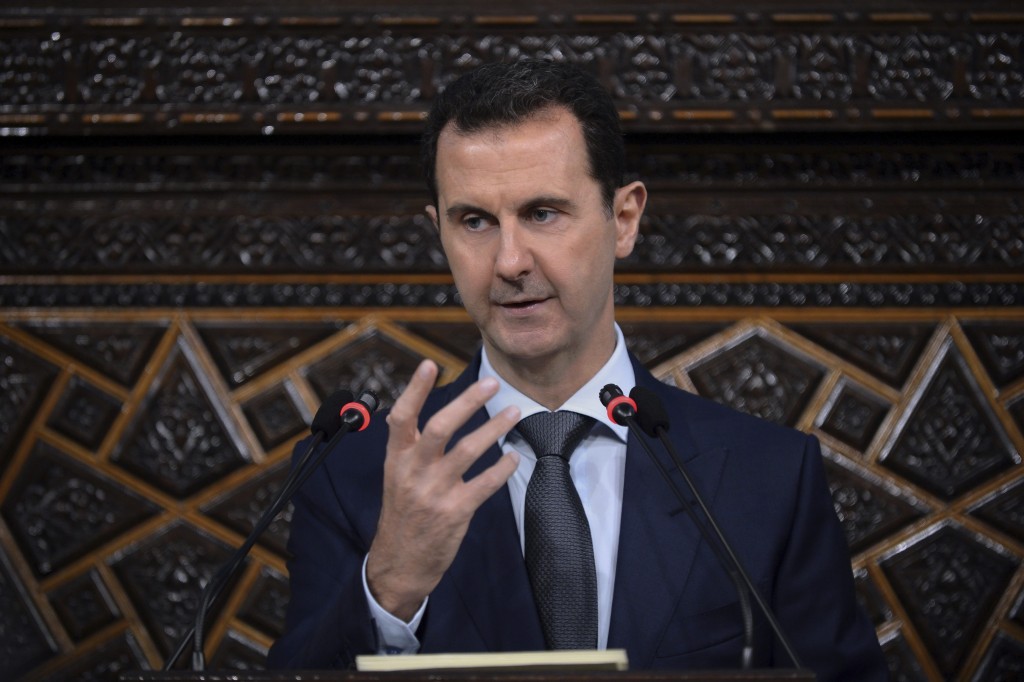 In this June 7, 2016 file photo released by the Syrian official news agency SANA, Syrian President Bashar Assad, addresses a speech to the newly-elected parliament at the parliament building, in Damascus, Syria. (SANA via AP)

BEIRUT – Syria condemned a U.S. missile strike on one of its air bases that killed seven people early Friday as an “aggression,” while the Syrian opposition welcomed military action against President Bashar Assad after a chemical attack earlier this week killed over 80.

The surprise U.S. strike drew quick reactions from the friends and foes of the Syrian government and further strained relations with Russia, a key ally of Assad, which suspended a deal with the U.S. to prevent midair collisions in Syria’s crowded skies.

Saudi Arabia and Turkey, which support the Syrian opposition, welcomed the missile strike, with Riyadh calling it a “courageous decision” by Trump. Iran, another close ally of the Syrian government, condemned the strike, describing “unilateral action” as “dangerous.”

Iranian Foreign Ministry spokesman Bahram Ghasemi warned the strikes would “strengthen terrorists,” further complicating the situation in Syria. Shiite Iran and majority Sunni Saudi Arabia have been locked in a power struggle over influence in Syria and elsewhere in the region.

The bombing represents Trump’s most dramatic military order since taking office and thrusts the U.S. administration deeper into the complex Syrian conflict. The Obama administration threatened to attack Assad’s forces after previous chemical attacks, but never followed through. Trump called on “all civilized nations” to join the U.S. in seeking an end to the carnage in Syria.

They were fired from two warships in the Mediterranean Sea, in retaliation for Tuesday’s deadly chemical attack, which officials said used chlorine mixed with a nerve agent, possibly sarin.

The Syrian military said at least seven people were killed and nine wounded in the missile strike. A Syrian opposition monitor put the death toll at four, including a general and three soldiers.

“Washington’s move deals a significant blow to the Russia-U.S. relations, which are already in a deplorable shape,” Peskov said. He added that the attack creates a “serious obstacle” for creating an international coalition against terrorism. 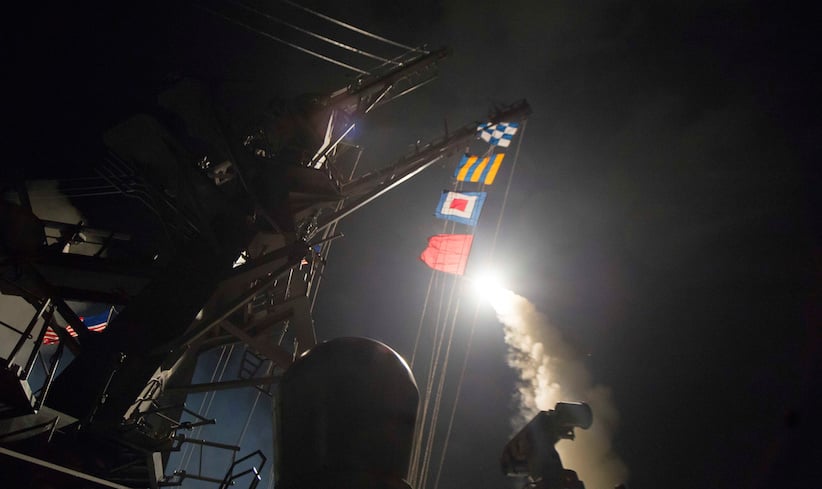 Russia’s Foreign Ministry later said it is suspending a memorandum with Washington – signed after Russia began an air campaign in support of Assad in September 2015 _ under which the two countries exchange information about sorties over Syria.

A U.S.-led coalition has been bombing Islamic State targets in Syria since 2014, while Russia’s air force has been striking both extremist groups and Syrian rebels in order to aid Assad’s forces.

Israeli Prime Minister Benjamin Netanyahu welcomed the missile attack, saying that Trump “sent a strong and clear message” that “the use and spread of chemical weapons will not be tolerated.”

A Syrian opposition group, the Syrian Coalition, welcomed the U.S. attack, saying it puts an end to an age of “impunity” and should herald the start of a larger campaign against Damascus.

Maj. Jamil al-Saleh, a U.S-backed rebel commander based in the area where the U.S. attack took place, told The Associated Press he hoped the strike would be a “turning point” in the six-year-old war, which has killed an estimated 400,000 people.

Assad’s government had been under mounting international pressure after the chemical attack, with even key ally Russia saying its support is not unconditional.

Syria rejected the accusations, and blames opposition fighters for stockpiling the chemicals. Russia has said the toxic agents were released when a Syrian airstrike hit a rebel chemical weapons arsenal on the eastern outskirts of Khan Sheikhoun, and that blame should not be apportioned until a full investigation has been carried out.

Russia’s intervention in Syria since September 2015 has turned the balance of power in Assad’s favour, and Moscow has used its veto power at the Security Council on several occasions to prevent sanctions against Damascus.

Trump had said the chemical attack crossed “many, many lines,” and put the blame squarely on Assad’s forces. Speaking Thursday on Air Force One, Trump said the attack “shouldn’t have happened, and it shouldn’t be allowed to happen.”

A survivor of the chemical attack told the AP he hopes the U.S. missile attack puts an end to government airstrikes, creating a safe area for civilians.

Alaa Alyousef, a 27-year old resident of Khan Sheikhoun, said the U.S. missile attack “alleviates a small part of our suffering,” but he said he worried it would be an “anesthetic” that numbs their pain and saves face for the international community.

“What good is a strike on Shayrat air base alone while we have more than 15 other air bases,” he said. Alyousef lost at least 25 relatives in the chemical attack.

The U.S. had initially focused on diplomatic efforts after the chemical attack, and had pressed the U.N. Security Council to adopt a resolution drafted with Britain and France that would have condemned Syria’s suspected use of chemical weapons. But the vote was cancelled because of differences among the 15 members.