The agreement, engineered by the U.S. and Russia, is set to take effect at midnight Friday local time 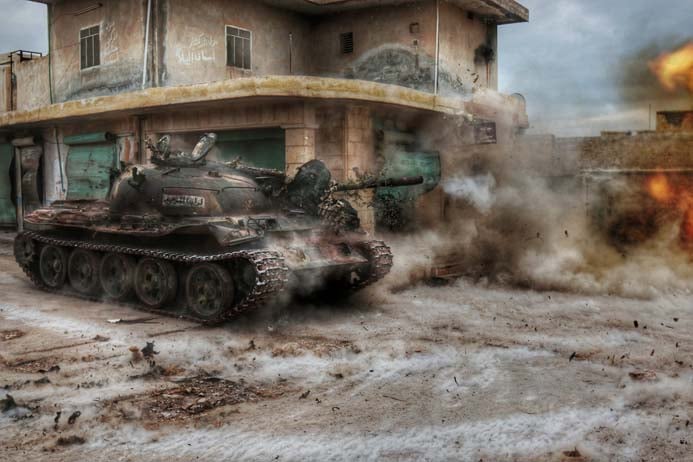 Members of a Syrian opposition group attack the headquarters of Assad regime forces in the villages of Nubul and al-Zahraa in Aleppo, Syria on February 12, 2016. (Mustafa Sultan/Anadolu Agency/Getty Images)

BEIRUT – The Syrian president on Wednesday assured Russia’s Vladimir Putin of Damascus’ commitment to a Russia-U.S. proposed truce, even as a spokesman for a Saudi-backed alliance of Syrian opposition and rebel factions expressed “major concerns” about the ceasefire, due to begin later this week.

Salem Al Meslet, spokesman for the alliance known as the High Negotiations Committee, said his group is worried that Russia and Syrian President Bashar Assad’s forces would continue to strike at mainstream rebels under the pretext of hitting “terrorist groups” during the truce.

The agreement, engineered by the U.S. and Russia, is set to take effect at midnight Friday local time. It does not cover the Islamic State group, Syria’s al-Qaida branch known as the Nusra Front, or any other militia designated as a terrorist group by the U.N. Security Council.

On Wednesday, Assad and Putin discussed the truce agreement in a telephone call, according to the Syrian state-run news agency and a Russian official. SANA said Putin called Assad, adding that the two leaders stressed the importance of continuing to fight the Islamic State, the Nusra Front “and other terrorist organizations.”

Putin’s spokesman, Dmitry Peskov, confirmed the phone call, saying there were differences in opinion between Moscow and Damascus but that Russia is one of the few countries still in contact with “the legitimate Syrian leader.” He did not elaborate.

Speaking in a conference call with journalists, he said Moscow was doing its part and is expecting the United States to also do its part to make sure the groups they support adhere to the cease-fire.

“The main goal is to stop the bloodletting in Syria,” he said.

Asked whether Moscow had a Plan B in case the truce did not hold, he replied: “We are concentrating on Plan A right now … it’s too early to speak of other plans.”

The truce agreement remains shaky at best and major questions over enforcement are still unresolved.

Also, it is not clear exactly where along Syria’s complicated front lines the fighting would stop and for how long – or where counterterrorism operations could continue. Also unresolved are how breaches in the truce would be dealt with.

U.S. Secretary of State John Kerry told American lawmakers on Tuesday that he would not vouch for the success of the cease-fire agreement but that it is the best pathway for ending five years of violence in Syria that has killed more than 250,000 people and displaced another 11 million from their homes.

Al Meslet, the opposition spokesman, said the HNC is holding open meetings in the Saudi capital of Riyadh and is seeking guarantees and clarifications from the United States about the mechanism for the implementation of the agreement.

Speaking in a phone interview with The Associated Press, he said however that the opposition wants to stop the bloodshed and would abide by the truce.

“The Americans are taking note of our concerns and we are waiting for their replies,” Al Meslet said.

Associated Press writers Lynn Berry and Katherine Jacobsen in Moscow and Albert Aji in Damascus contributed to this report.