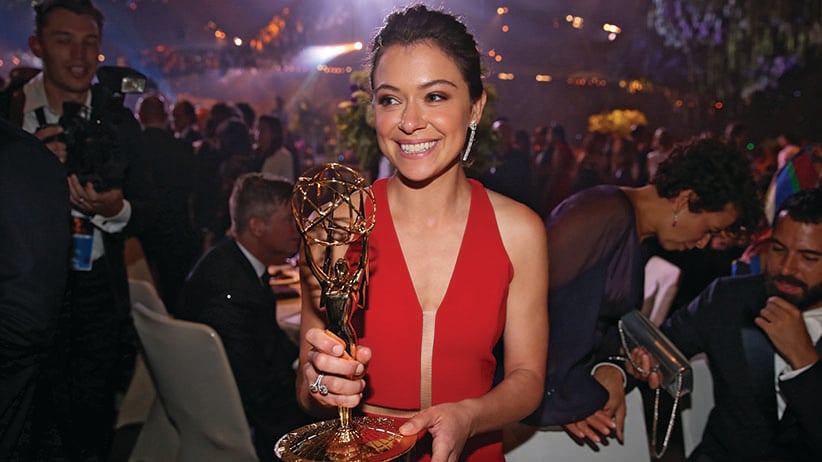 Actress Tatiana Maslany holds her award for Outstanding Lead Actress In A Drama Series for “Orphan Black” as she mingles at the Governors Ball after the 68th Primetime Emmy Awards in Los Angeles, California U.S., September 18, 2016. (Lucy Nicholson/Reuters)

Canadians should look at the Travis Vader murder trial as a template for all court proceedings, not because of the guilty verdict, and certainly not because the judge cited a section of the Criminal Code of which portions were declared unconstitutional, but because anyone could watch it unfold live online. There are notable reasons to keep parts of a trial off-camera—the privacy of certain witnesses being one—but there is no reason why judges should not deliver a verdict as transparently as possible for all to watch from anywhere in the world. Openness is a cornerstone of our legal system and it should be embraced in a social media age—be it via Facebook Live, Periscope or even old-fashioned TV. The public should have the right to watch what goes into a judge’s decision, and see for themselves that justice is being served.

Along for the ride

The driverless future will soon be upon us. This week, Uber unveiled a pilot project using self-driving cars, and not to be left behind, the co-founder of its ride-sharing competitor, Lyft, said that within five years self-driving cars will make up the majority of its rides. Meanwhile, Wal-Mart has applied for a patent on self-driving shopping carts that can congregate together, and stop clogging up parking spaces. Now, if they can find a way to fix all the carts with wonky wheels.

Canada’s private refugee sponsorship model is so successful that it could soon become a popular export. The Liberals announced a partnership with the United Nations and billionaire investor George Soros to help other nations emulate Canada’s program. The model isn’t perfect—an outpouring of support by Canadians strained the ability to process so many newcomers at once—but to put resettlement in the hands of well-meaning citizens is both a smart and effective use of a country’s most valuable resource: its people.

While the Oscars have gone two years without a single visible minority nominated in a lead or supporting acting category, the recent Emmys were a welcome change. One-quarter of acting nominations went to non-white actors and Rami Malek’s win for Best Actor in a Drama (Mr. Robot) broke an 18-year winning streak for non-minorities in the category. Hollywood was chuffed. As Emmy host Jimmy Kimmel joked: “The only thing we value more than diversity is congratulating ourselves on how diverse we are.”

The Bank of International Settlements (BIS), the so-called central bank for central banks, warned that the ratio of household and corporate debt to GDP in China has soared 30 per cent above its long-run average, and that this “credit gap” is the highest recorded for the nation since 1995. Generally, anything above 10 per cent is considered a warning sign of an impending banking crisis. But we shouldn’t feel smug. Not only would a banking crisis in China have huge implications for the resource-dependent Canadian economy, the BIS also called out two other countries for being in the danger zone earlier this year: Turkey (16 per cent) and—you guessed it—Canada (12 per cent).

The new centralized payroll and pension system for every federal government department, called Phoenix, suffered its latest embarrassment after “storage space issues” led to a system outage for several hours. In recent months, the plagued payroll system has overpaid some workers on occasion and forgotten to pay others altogether, all while the price tag to simply fix it could now run upwards of $50 million. Fortunately for government workers, the most recent issue was rectified before payday on Wednesday. Otherwise, there would have been hell to pay.

Few countries embraced refugees more during the recent crisis than Germany, but Chancellor Angela Merkel is paying a political price. In recent state elections in Berlin, Merkel’s Christian Democratic Union party slumped to 17 per cent of the vote, while the far-right, anti-immigrant Alternative for Germany party earned 14 per cent. Looking for more bad election news? Vladimir Putin’s United Russia party won three-quarters of the seats in that country’s parliament after an election with a record low turnout. In Moscow, only 28 per cent of eligible voters bothered to turn up. No matter: Putin’s approval rating is still 83 per cent. Also, Trump.

Angelina Jolie filed for divorce from Brad Pitt, reportedly over conflicting parenting styles for their six children. The break-up of “Brangelina”—their celebrity couple nickname—comes after 10 years of dating, two years of marriage and countless tabloid cover stories. How much did this news shake up Los Angeles? Moments after the story broke, a 3.1-magnitude earthquake hit the city.